US, Led by an Erratic Trump, Seeks to Undermine UN 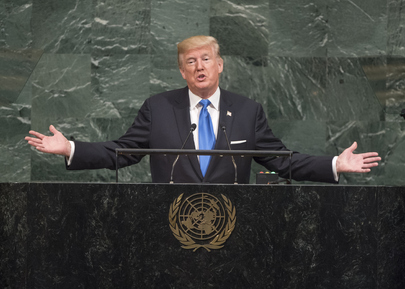 UNITED NATIONS, Jan 18 2018 (IPS) - The continued erratic and outrageous comments by President Donald Trump – and his attempts to undermine the United Nations – are threatening to cause irreparable damage to the world body.

The signs are ominous: the US withdrawal from the UN Educational, Scientific and Cultural Organization (UNESCO); the threats against member states voting for anti-Israeli resolutions; slashing funds to a 69-year-old UN agency for Palestinian refugees; withdrawal from the 2016 Paris climate change agreement; threats to “totally destroy” a UN member state, North Korea; a US-inspired $285 million reduction in the UN’s regular budget for 2018-2019, and the insidious attempts to wreck the 2015 Iranian nuclear agreement.

And more recently, Trump triggered a global backlash when he singled out Haiti and African nations as “shithole countries” eliciting protests from the 55-member African Union (AU).

Trump has also come under fire for his insulting statements that “all Haitians have AIDS” and Nigerians who visit the US “would never go back to their huts.”

But running notoriously true to form, he has reversed himself again and again — and denied making any of these statements, despite credible evidence.

In its editorial last week, the New York Times rightly declared that Trump “is not just racist, ignorant, incompetent and undignified. He’s also a liar.”

That’s quite a mouthful to characterize the supreme leader of the free world: a crown which he may lose, paradoxically, to President Xi Jinping of totalitarian China.

James A. Paul, Executive Director of Global Policy Forum (1993-2012), an NGO monitoring the work of the United Nations, told IPS the Trump administration poses a grave threat to the future of the UN and to the development of international cooperation more generally.

“But we have to ask: how much does the present differ from the past and how close are we to a collapse of the UN under assault from Washington?.”

Every day, there appears new confirmation of the problem, whether it is President Trump’s crude statements about world leaders, his harsh commentary and stereotypical remarks about other countries and peoples, his upsetting of carefully-constructed international agreements, and his utter disregard for the tactfulness of diplomacy, said Paul.

“In terms of the UN as an institution, we see such blows as the US withdrawal from the Climate Change Agreement, looming US defunding of the UN’s Palestinian refugee aid, and US-led slashing of the regular UN budget.”

Crude blackmailing to enforce favorable votes in UN bodies, said Paul, has also been practiced by Washington more than ever.

“At the same time, there is an increasingly-harsh US government rhetoric about the UN as a useless bureaucracy, undeserving of respect and support.”

Paul said “right-wing nationalism has arisen in many lands in recent years, of course, and we should remember that the US has often in the past acted towards the UN and the international community with condescension and domination”.

Recent developments, he argued, are therefore not so much unique as they are extreme, posing deeper-than-ever threats to the viability of the UN in an extremely unstable and dangerous time.

Meanwhile, the US has already announced it will cut about $65 million in funding for the UN Relief and Works Agency (UNRWA) which providence sustenance to millions of Palestinian refugees in the West Bank, Jordan and Lebanon.

Responding to a question at a press conference January 16, UN Secretary-General Antonio Guterres said he was “very concerned” about the US funding cuts.

“I strongly hope that, in the end, it will be possible for the United States to maintain the funding of UNRWA, in which the US has a very important share.”

And he made it clear that UNRWA, contrary to a misconception, is “not a Palestinian institution. UNRWA is a UN institution created by the General Assembly.”

Last December, US Ambassador to the UN Nikki Haley, who has hinted at linking America’s financial leverage as the biggest single donor, to Washington’s political demands, claimed the US had successfully negotiated the $285 million reduction of the UN budget for 2018-2019.

And it was Haley who threatened to “take down names” and cut US aid to countries that voted for a resolution last December condemning US recognition of Jerusalem as the new Israeli capital.

Her job as Permanent Representative of the UN includes letting the US government know the views of the rest of the world, but it is clear from her counterproductive threats that she does not really care, he said.

Sarah Palin (a former Republican Vice Presidential candidate), announcing her foreign policy credentials, once remarked she could monitor Russia from her backyard in her home state of Alaska.

“And it is clear that Haley can only see Israel from the US mission on First Avenue,” said Williams, author of “UNtold: The Real Story of the UN in Peace and War,” recently released by Just World Books.

That seems to reflect some deep prejudices as well as blatant domestic political ambition. While Bush appeased his right wring by letting John Bolton bluster, Washington and the White House made sure that he did not break up the playground, he added

“Trump shows no signs of restraining the damage that Haley is doing to the UN and international law – nor indeed to American diplomacy which Haley even more than some of her predecessors is making an oxymoron.”

But unlike earlier times, a newly involved, and newly affluent China is waiting to pick up the balls that Haley and Trump throw out, said Williams who has been covering the United Nations since 1989.

Mouin Rabbani, Contributing Editor, Middle East Research and Information Project (MERIP), told IPS history is demonstrating once again that there is an inherent threat to international peace and security “when powerful states are led by volatile airheads.”

The United Nations is as exposed to these risks as any other state or institution, and arguably more so given its dependency on not only American funding but also US engagement, he added.

“At the same time, it would be a little unfair to assign blame solely to Trump and his diplomats, in this case led by the extraordinarily vulgar Nikki Haley.”

This is because UN-bashing has become something of a national sport if not civic requirement in the US for decades, fed by a ceaseless stream of morbid, utterly fantastical conspiracy theories of the type that Americans excel at concocting and revel in ingesting, he noted.

“We are witnessing, in real time, what happens when powerful states cease to properly invest in the education of their children.”

The problem for the UN is that making the world body a more effective organization is the one item not on the agenda of its US critics, he declared.

With Trump, they smell a unique opportunity to administer permanent and irreparable damage to the UN (and for that matter pretty much everything else they identify with modern civilization).

“It will be for the international community to decide whether to yet again roll over and play dead or prevent the lunatics from taking over the asylum,” Rabbani declared.

Paul told IPS that to get perspective and avoid idealizing earlier years at the UN, “we should remember the negative effects of the Cold War on the UN, including the proxy wars, the fierce battles over decolonization, and the negative pressure constantly brought to bear on UN budgets.”

The Congo crisis in the early 1960s had a deadly effect on the UN in more ways than one. Recent information points to the assassination of UN Secretary General Dag Hammarskjöld in 1961, showing how far Washington and its allies were prepared to go to weaken the UN so as to protect mining and other interests in Congo and throughout Africa, he noted.

“Today, the budget cuts may be the UN’s most serious danger. In the previous biennium, the Obama Administration already forced budget reductions but this time the cuts have been deeper and more fundamental.”

After years of “doing more with less,” the UN system is desperately short of funds for basic programs. Still, the Trump people in Washington have declared that cuts must go deeper and further shrinkage is necessary.

“Beyond the Regular Budget, Washington is imposing deep austerity on UN agencies, funds and programs. Will the Trump administration simply strangle the UN with steadily more draconian under-funding?,” he asked.

This has apparently been the Trump plan for US government agencies as well, from Environmental Protection to the State Department. “Kill the Beast!” chant the alt-right ideologues to the applause of their neo-liberal corporate backers. said Paul, author of the newly-released book “Of Foxes and Chickens: Oligarchy & Global Power in the UN Security Council.”

To assess the danger, “we need to go beyond calculations about whether Trump will be voted out of office in 2020.” Such possibilities, he noted, are a reminder that Trump’s own peculiarly odious politics could be short-lived.

“But they do not answer the larger question: what is happening in the world that has given rise to so many thuggish right-wing populists and so many corrupt, rightward-leaning centrists as well?”

Could it be the rising hegemony of the multinational corporations and their owners, who think they can rule over the global system with a minimum of interference, from old-fashioned states and ineffective intergovernmental bodies?, asked Paul, a former editor of the Oxford Companion to Politics of the World.

“We, the peoples,” the globe’s citizens, have been lured into this trap, to the surprise of so many intellectuals, globalists, and internationalists. This, not Trump, is the existential threat that the UN faces.

“Can a new leadership arise, with new ability to bring the public to its senses? Can the climate crisis stimulate a new transnational political movement? Can a global constituency for a revived national politics and a new and transformed UN come soon into being?,” he asked.

“The UN’s future almost certainly depends on it”, he said.