Matthew Wells is a Senior Crisis Advisor at Amnesty International, and has just returned from two weeks of research in Cox’s Bazar, Bangladesh. 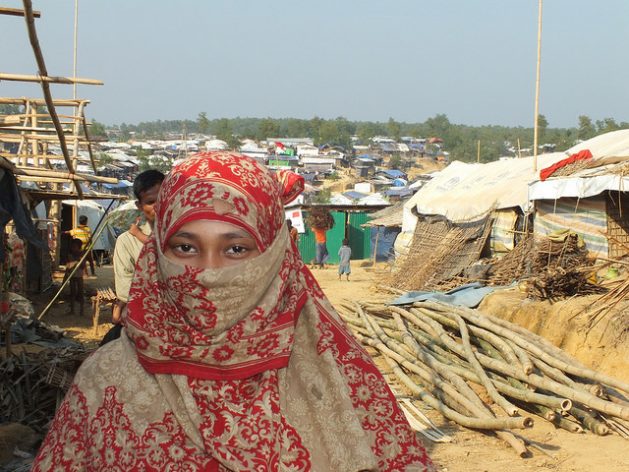 COX'S BAZAR, Bangladesh, Feb 9 2018 (IPS) - Abdu Salam stayed in his village as Myanmar soldiers and local vigilantes burned down dozens of homes there last August. He stayed as news spread of atrocities that soldiers had committed in other Rohingya villages across northern Rakhine State. He stayed because Hpon Nyo Leik village was his home, the only home he’d known, and he wanted to protect his family’s property and right to live there.

But when, at the end of 2017, the Myanmar military’s starvation tactics left Abdu Salam’s family struggling to find food, they were forced to join the exodus to Bangladesh.

On 13 February, the UN Security Council will be briefed again on the situation in Myanmar. The briefing comes as the Myanmar government says it’s ready to start repatriating people from Bangladesh. But the military’s efforts to drive the Rohingya population out of the country haven’t even ground to a halt. The Security Council’s inaction, amid a weak international response to the ongoing crimes against humanity, has been a key part of the problem.

Abdu Salam and I sat in his recently erected bamboo shelter at the edge of Kutupalong Extension, the ever-growing refugee camp in southern Bangladesh that houses most of the 688,000 Rohingya who have fled Myanmar since last August. He was with his wife and six children, including his baby son, visibly emaciated, who slept in a makeshift crib that hung from the shelter’s ceiling.

His family arrived in Bangladesh in early January, among the hundreds who still cross the border each week. As part of our latest research in Bangladesh, my Amnesty International colleagues and I interviewed 19 men and women from this newest wave of refugees. I heard the same story again and again: the Myanmar military squeezed them out of northern Rakhine State by driving them to the brink of starvation.

Abdu Salam told me he used to go to the hill near his village and collect wood to sell at market. But even before the current crisis began, that source of livelihood was cut off, due to the severe movement restrictions imposed on the Rohingya population, as part of the conditions of apartheid under which they have lived.

Then, following the 25 August attacks on around 30 security force outposts by the Arakan Rohingya Salvation Army (ARSA), the Myanmar military unleashed a campaign of violence against the Rohingya across northern Rakhine State. Our October 2017 report documented in detail the military’s crimes against humanity, including the widespread killing of Rohingya men, women and children; rape and other forms of sexual violence against women and girls; forced deportation; and the targeted burning of villages. Médecins Sans Frontières (MSF) estimates that at least 6,700 people were killed in the first month of the crisis. The UN, other rights organizations, and media outlets have all painted the same, devastating picture.

Hpon Nyo Leik village was spared the worst of the military’s violence. But security forces arrested Abdu Salam’s 14-year-old son, accusing him of involvement with ARSA. To secure the boy’s release, the family scraped together almost their entire savings. It’s one of many examples of arrest-for-extortion we have long documented.

In the months after 25 August, movement restrictions grew even tighter for the remaining Rohingya, and already strict curfews were extended. Soldiers and vigilantes looted and torched Rohingya markets or, as in Hpon Nyo Leik, restricted market access to people holding a National Verification Card (NVC), a temporary identification document that most of the Rohingya community rejects, since it fails to recognise them as citizens.

Even as pressure mounted and hundreds of thousands left, many other Rohingya families stayed. Agriculture is central to livelihoods across Rakhine State, and the harvest season for rice, the area’s staple crop, occurs in November and December. Stockpiles from the previous harvest began to run low. The Myanmar military must have known what was to follow when, in many Rohingya villages, it then blocked people from going to their paddy fields.

As the harvest started, Abdu Salam worked for several days. “Then the soldiers came and said, ‘This harvest is not your harvest’,” he told me. “There were many [of us] harvesting there. All of us were forced to leave.” Soon after, he saw non-Rohingya villagers using machinery to harvest the same crops.

With no food for their six children, except occasional handouts of a little rice from wealthier neighbours, Abdu Salam’s family fled in late December, joined by others facing the same situation. Even before the August attacks and subsequent lockdown, the World Food Programme warned that malnutrition rates in northern Rakhine State were at emergency levels.

As Rohingya families fled toward the coast in recent weeks, Myanmar forces dealt a final blow by systematically robbing them at checkpoints. More than a dozen recent arrivals, including Abdu Salam, described to me the worst such checkpoint, near Sein Hnyin Pyar village tract in Buthidaung Township. There, soldiers separate men from women; search sacks and bodies, often sexually assaulting women in the process; and steal whatever of value they find, including money, jewellery, clothes, and phones.

Though the tactics may have changed, it should come as no surprise that the military’s ruthless campaign races forward. In the midst of its almost incomprehensively-efficient ethnic cleansing of the Rohingya population, some states around the world have expressed alarm or even condemned the atrocities. But the international community has taken almost no concrete action.

In addition, the Security Council must demand that Myanmar authorities provide full and sustained aid access throughout the country, as well as access to independent investigators, including the UN Fact-Finding Mission. It should also demand that Myanmar respect a free press and immediately release two Reuters journalists, Wa Lone and Kyaw Soe Oo, being detained and prosecuted simply for carrying out their reporting work on the military’s atrocities.

The Security Council has to quickly decide which side of history it wants to be on. With each day it fails to act, more people like Abdu Salam are forced to flee.