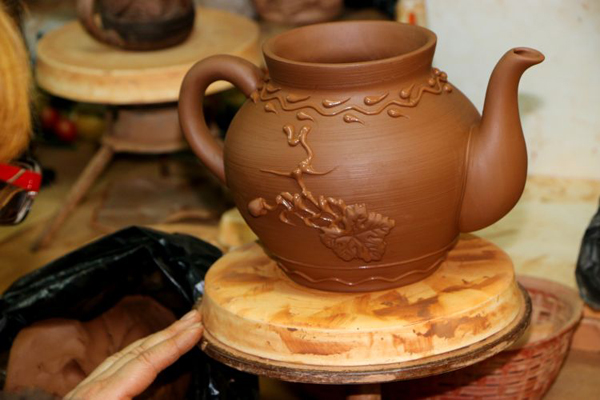 Apr 16 2018 - A man living in the Government-controlled part of the conflict-affected eastern Ukraine and two women, who moved from the non-government controlled area to Ukraine’s capital of Kyiv, have chosen folk crafts for their business. With curly clay ornaments and the sophisticated traditional embroidery stitches, they earn their living, and, to some extent, try to put the country back together.

The city of Sloviansk is located some 70 kilometres from the so-called contact line in eastern Ukraine. An industrial zone, once known for the mud-bath resort in its outskirts, has a complicated recent history. For three months in the spring of 2014, at the very start of the outbreak of the conflict, the city was in the hands of armed groups. In July 2014, the Government of Ukraine restored control over Sloviansk, however, the city is only a hundred kilometres from Donetsk, the centre of the self-proclaimed Donetsk People’s Republic. 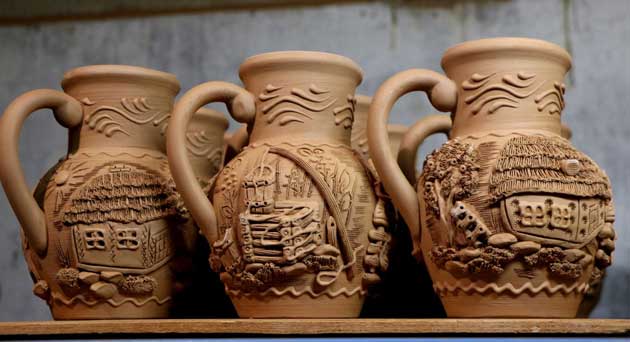 Pottery has been a traditional product and ‘brand’ of the city since the times of the Soviet Union.

“There were several big industrial factories, that also produced housewares as a small side business. When the main factories were shut down, people who worked at these small manufacturers opened their own private small factories. Currently there are about 300 such small enterprises, and each one tries to create something unique,” says Evhen, an IOM grantee as he gives a tour of his pottery factory. 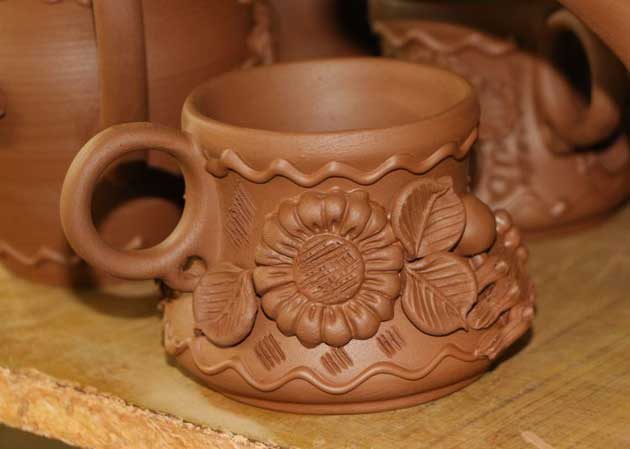 All Evhen’s products have elaborate decorations.

Eagerly showcasing his production line of cups, mugs, kettles, bowls and vases, Evhen explains the details of the complicated process. For instance, his factory does not use paints, but a mix of different colour clays.

Evhen was supported though IOM Ukraine’s economic empowerment programme as a vulnerable member of a community hosting internally displaced persons. He has a disability and runs his business to provide for his wife and two children.

With funding from the British Embassy in Ukraine, IOM supported Evhen with computer equipment, enabling his factory to craft pottery with raised designs and coats of arms. Now, Evhen has more clients ordering mugs and other souvenirs with their corporate logos.

“Before the conflict, our main market was Ukraine and Russia. Since 2014, both internal and external sales have dropped,” says Evhen. “The other owners of pottery factories and I would really like to export our products to the European Union. However, we need guidance and facilitation. Also, the intermediaries make the process complicated and disadvantageous for us. At the same time, we can produce whatever the client wants and our pottery is of a good quality.” 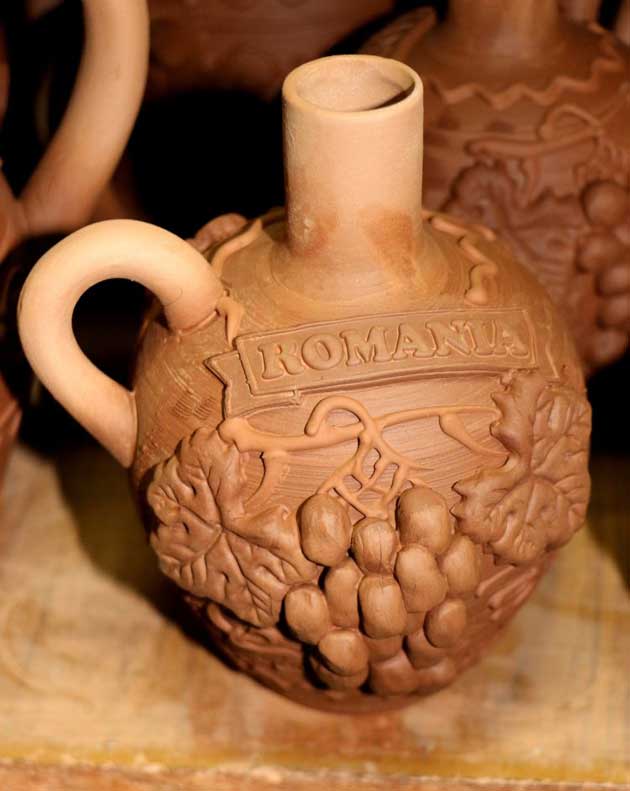 One of the items produced for export

Currently Evhen’s factory produces souvenir pottery for export to Romania and Moldova. Another order they have received is from a company selling souvenirs in the Ukrainian Carpathian Mountains. So, some of the souvenirs to be sold in the heart of Western Ukraine are now produced in the Donetsk region city of Sloviansk. 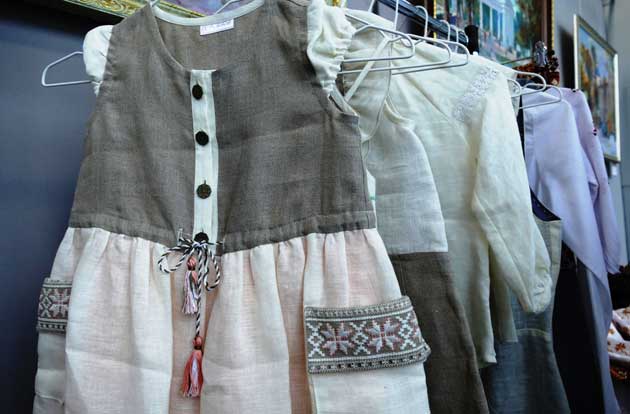 Tetiana, a retired piano teacher, and Oksana, a former veterinarian clinic employee, were Evhen’s neighbours until 2014. At the outbreak of the conflict, they moved from their native Donetsk to Kyiv. Now, they also have a business built around a traditional Ukrainian craft – embroidery. The discreet beauty of their products immediately attracts attention of the visitors at IOM-organized business fairs. “No, this is not machine embroidery, this is hand-made,” Tetiana explains, with a kind smile to a customer at a fair held by IOM in the northern Ukrainian city of Zhytomyr. 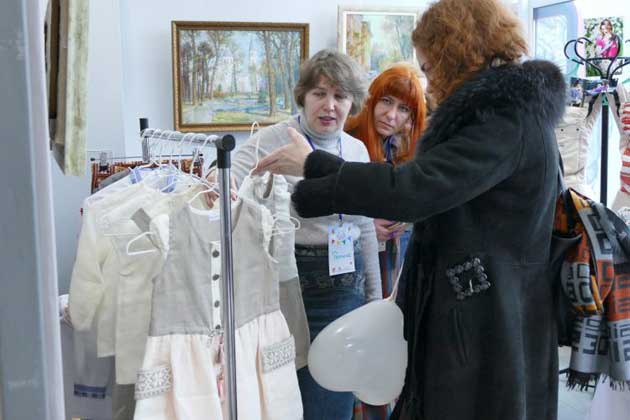 Embroidery has been Tetiana’s hobby for many years. While still in Donetsk, she was one of the leaders of a project involving 17 craftswomen from all over Ukraine, who were embroidering designs, collected at the end of 19th century by Olena Bdzhilka, a Ukrainian ethnographer, writer, translator and activist, as well as the mother of famous Ukrainian poet Lesya Ukrainka. The aim of the project was to preserve and promote traditional Ukrainian embroidery which has over 200 stitching techniques. 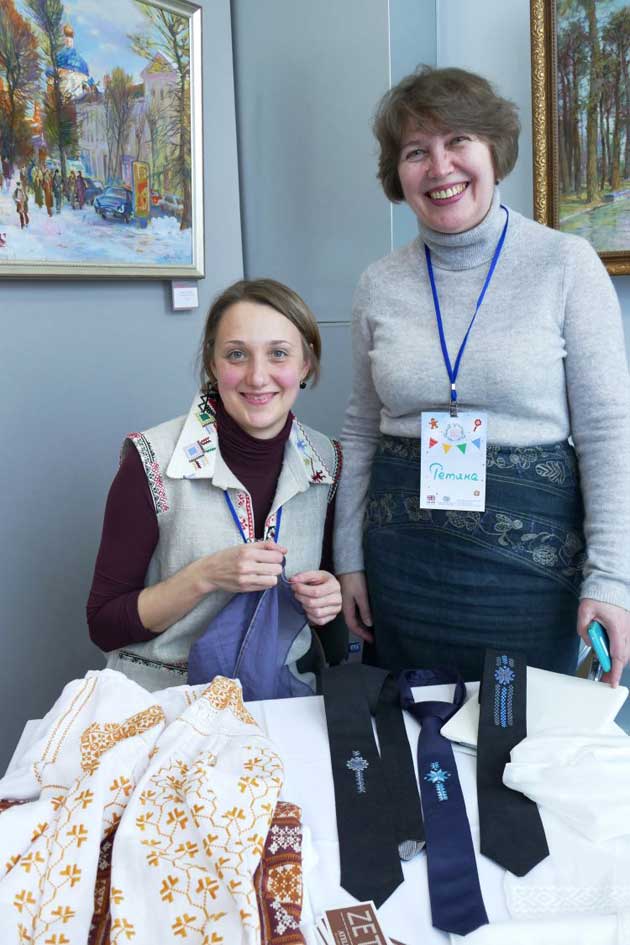 After relocation to Kyiv, Tetiana decided to turn her hobby into a business. She found a local business partner, as well as some new friends and supporters, at a thematic internet forum. Now, they have a registered trade mark, and an exciting professional life.

“We make everything, but our favourite type of work is modern clothing with traditional Ukrainian embroidery. We aim to preserve this rich folk craft. Traditional embroidery should be applicable in modern life, using it for modern clothing is the way to make it live,” says Tetiana.

One of the first ready-to-wear collections with traditional embroidery was created by Tetiana soon after her relocation to Kyiv. Due to limited funds, old jeans collected from friends were used for the production.

Tetiana and her colleagues also conduct master classes on hand embroidery at different museums in Kyiv. They have also written books on traditional embroidery. Impressively, the royalties from one of their publications allowed them to buy the first sewing machine for their atelier.

With an IOM grant, provided with funding from the British Embassy in Ukraine, they received another machine, and a tablet which allows them to show their collections to potential customers and anyone interested in traditional embroidery and tailoring at fairs and similar events. 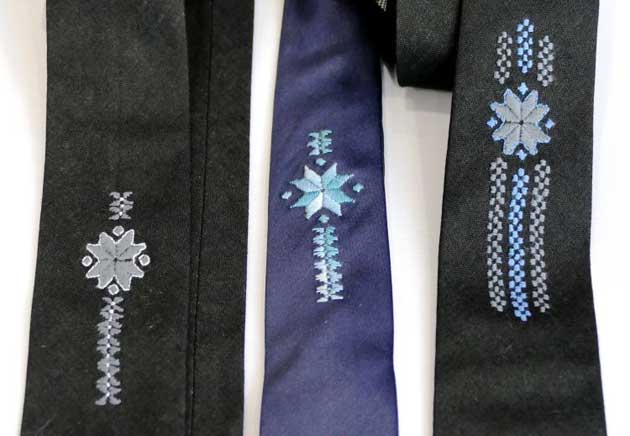 Oksana studies embroidery and sewing from Tetiana, and is in charge of the promotion and marketing of the business. The team would like to grow, but for now they are limited due to budget constraints that prevent them from renting larger premises and hiring more staff.

“It was a mix,” says Tetiana with a knowing smile, when asked about the traditional embroidery of the Donbas and its place in the history of Ukrainian crafts of the 19th-20th centuries. “A mix featuring both traditional folk stitches brought to the Donbas by migrants from western parts of Ukraine, and the cross-stitched ornaments from the Russian albums, which copied Italian, German, or Dutch designs.” 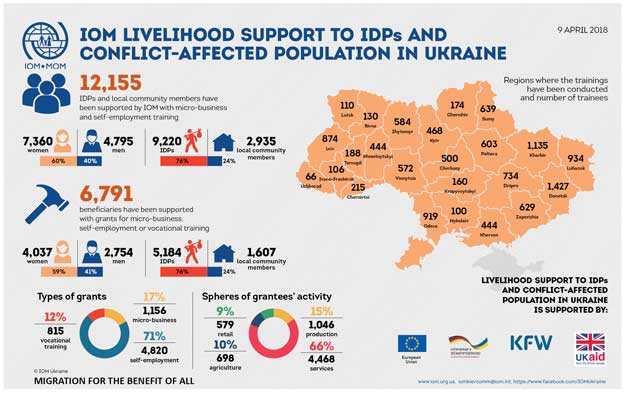 In 2018, the conflict in eastern Ukraine marks its fourth anniversary. Many of the 4.4 million Ukrainians affected, including 1.5 million internally displaced, have depleted their resources, or cannot return home to rebuild their lives. Given Ukraine’s protracted humanitarian crisis, the international community’s involvement is vital both in assisting the most vulnerable people in need and supporting millions of conflict-affected Ukrainians, while also strengthening resilience and recovery.

“The people of Ukraine must be supported to get back on their feet and build a future filled with hope,” says Thomas Lothar Weiss, IOM Ukraine’s Chief of Mission.

Since 2014, IOM, with funding from its international donors, supported almost 7,000 conflict-affected people with grants for self-employment, micro-enterprise and vocational training.

“There are many internally displaced people and host community members, who have shown resilience, knowledge, experience and passion to develop their businesses in a new place despite all the challenges they face. We just provide them with additional resources – assets and some training – but it is their motivation and determination that are key to their own business success,” says Thomas Weiss.