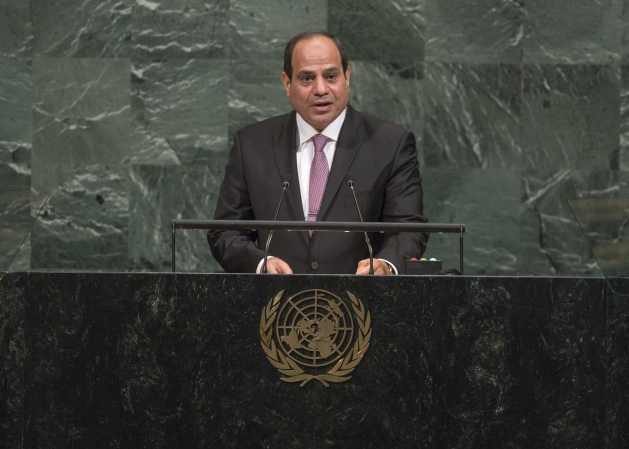 CAIRO, Jun 6 2018 (IPS) - Egyptian President Abdel Fattah Al-Sisi, who was re-elected in March, continues the repression of regime opponents. Critics view the situation as increasingly dangerous. “There is no logic anymore,” says one.

“The injustice increases… the regime becomes more violent. I’ll take a much-needed break from politics… There is nothing more to say,” tweeted regime critic Hazem Abdelaziz on 18 May, after a number of prominent activists had been arrested over the span of a few days.

Less than a week after this tweet, police raided the Abdelaziz’s house in Cairo, arresting him on accusations of ‘spreading false news’ and  ‘joining a banned organisation’.

In 2014 Abdelaziz still worked for the presidential campaign of President Al-Sisi, but later described this as his “biggest mistake” and became a strong critic of the regime, in particular concerning the limitation of freedoms and repression of opposition groups.

He was the sixth prominent activist arrested in May – after satirical actor Shady Abu Zeid, former opposition leader Shady Al-Ghazaly Harb, leftist lawyer Haitham Mohamedeen, women rights defender Amal Fathy, and blogger Wael Abbas – all on grounds of spreading false news and joining a banned or terrorist organisation, which typically is a reference to the outlawed Muslim Brotherhood.

Arrests of activists, opposition members or otherwise critical voices are not something new in Egypt, but such a large number of arrested prominent figures in a short time span is exceptional and worrying

An Egyptian PhD student at the University of Washington, Walid al-Shobaky, befell the same fate. He did research on the judicial system in Egypt, and disappeared on 23 May. Four days later he resurfaced in a Cairo prison, and the prosecution ordered his detention on the same accusations of false news and terrorism links.

Arrests of activists, opposition members or otherwise critical voices are not something new in Egypt, but such a large number of arrested prominent figures in a short time span is exceptional and worrying. “The situation becomes more difficult, more dangerous,” said Azza Solimon, women’s rights defender and lawyer for the arrested actor Shady Abu Zeid. “There’s no logic anymore.”

Abu Zeid became known from a prank with the police in 2016. On the five-year anniversary of the 25 January Revolution – the popular uprising that forced former president Hosni Mubarak to resign – he handed condoms blown up as balloons to policemen and posted a video of this online. Since, he has received threats from the police, was forced to resign from the television programme he worked for, and started to work for himself, posting humorous videos on a Youtube channel.

Abu Zeid was ‘shocked’ after his arrest, said Solimon, who tries to visit him frequently in prison. “He didn’t understand why he was arrested now. He doesn’t talk politics in his videos, and the accusations are vague.”

He is already over a month in pre-trial detention, and it is not clear when his case will start. “All we can do now is support him,” Soliman said. “I try to help him to deal with this situation, as his lawyer and mother-figure. He may be in jail for a long time.”

Soliman, who herself has a travel ban and whose bank accounts are frozen due to her involvement in activism, believes the recent arrests are a way to ‘discipline’ people. “Any person who joined in the revolution, they want to discipline.”

In other fields of society the regime leaves no room for dissent. The Ultras Ahlawy, the hard-core fan group of Cairo football club Al-Ahly, dissolved themselves in mid-May, citing the safety of their members. The Ultras White Knights, a fan group of Egypt’s second largest team Zamalek, followed suit two weeks later. The Ultras played an important role during the 2011 revolution, not shying away from a fight with the police during demonstrations.

The mobilising capacity of the Ultras is seen as a threat to the regime and police, who have tried to break up these groups for the past years. Since 2012, supporters are banned from attending stadium matches, clashes between Ultras and police have frequently led to fatalities, and dozens of members are in prison.

“The Ultras are desperate and don’t see a bright future,” said journalist and football fan Mahmoud Mostafa. “They hope for a reconciliation with the regime to get their fellow members out of prison.”

For example, in April this year 21 Ultras were arrested over inciting protests. Seven more were arrested in early May after a confrontation with the police.

A particular dramatic event took place in early 2015. At least 20 Zamalek supporters were killed in a stampede when police fired tear gas at a crowd in front of a stadium’s gate. Afterwards, not policemen but Ultras present at the scene were convicted. They would have incited riots with the police and hence been held responsible for the death of their fellow fans.

No space for independent voices

“The regime does not tolerate organised groups outside of its control,” Mostafa said. “The Ultras have a large audience among youth, and have [in the stadiums] an open platform to express an independent voice. That worries the state.”

Mostafa’s words reflect the underlying trend of the recent developments: the state does not want to allow a public space for citizens to express an independent voice, whether it is through social media, videos, stadiums or universities.

While the risks for Egyptians are much higher, foreign journalists are also subject to the crackdown. Two weeks ago French journalist Nina Hubinet was stopped at Cairo airport, interrogated about her previous work on Egypt, and sent back to France. She hadn’t been reporting from Egypt for five years and was only travelling to visit friends.

Last week the European Union expressed its concern about the recent arrests, describing them as a ‘worrying development’. The Egyptian Ministry of Foreign Affairs responded the same day. “No citizen in Egypt is arrested or tried as a result of engaging in an activity in the field of human rights or for directing criticism at the Egyptian government, but for committing crimes punishable by law,” spokesperson Ahmed Abu Zeid said in a statement.

While the Ultras have succumbed, Soliman remains resilient. “Yes I’m worried, and the arrests are becoming more, but I’m a fighter,” she said. She keeps trying to enforce her and other’s rights by law, even though sometimes it’s also too much for her. “But then I calm down, relax and hold on to the dream: Justice, equality and rule of law.”

That dream however, seems farther away than ever under the second term of President Al-Sisi.