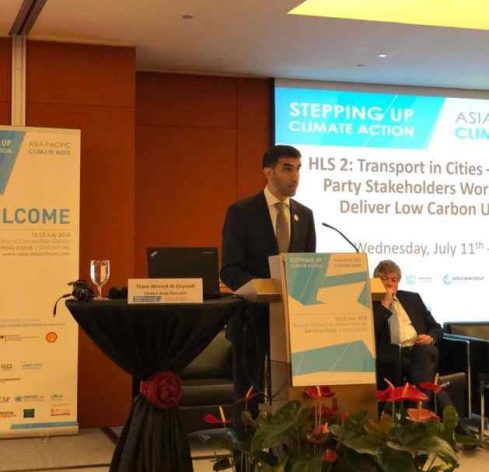 SINGAPORE, Jul 11 2018 - A UAE delegation, led by Dr. Thani bin Ahmed Al-Zeyoudi, Minister of Climate Change and Environment, has wrapped up a four-day official visit to Singapore that included participation in the Urban Sustainability Week.

During the forum’s proceedings, Dr. Al-Zeyoudi held one-on-one meetings with several high-level government officials and private business representatives from around the world. The meetings involved the exchange of expertise and discussions on the latest developments in areas of common interest, including the sustainability of natural resources, biodiversity, and clean energy. Moreover, the delegates toured several agricultural and environmental facilities and gained first-hand experience of the innovative technologies and practices in place.

“Even though the UAE is only 47 years old, throughout its history, its leaders have always had sustainability at heart. Among the products of our efforts are the National Climate Change Plan of the UAE 2017-2050 and the UAE Energy Strategy 2050, which includes a 50 percent clean energy target by 2050,” he said.

Speaking on water scarcity in the UAE, Dr. Al-Zeyoudi explained, “As water scarcity is a major challenge for the UAE, we are exploring innovations to achieve a sustainable supply of water, including the use of renewable energy in desalination. Work led by Masdar has shown promising results with 75 percent higher efficiency than conventional methods. We have also adopted an environmentally safe rain enhancement programme that has succeeded in increasing rainfall in the country.”

He pointed out that the UAE has one of the highest per-capita waste generation rates in the world, and the government works relentlessly to address this issue, adding that the country has set the ambitious target of reducing waste generation by 75 percent.

Moreover, Dr. Al Zeyoudi noted that the UAE is prioritising the planting of mangroves, which are an integral part of the country’s blue carbon ecosystem that has a positive impact on the marine environment and contributes to CO2 reduction.

Speaking on the UAE’s drive to raise awareness of sustainable practices, he said, “The UAE spares no effort to educate industries and the public about the concept of sustainable consumption and production to ensure the preservation of its resources for future generations.”

Dr. Al Zeyoudi also delivered a speech at a session on “Transport in Cities,” held as part of the Asia-Pacific Climate Week 2018, organised by the United Nations Framework Convention on Climate Change. He said, “Our country has proven that ambitious climate action can go hand in hand with continued economic growth and prosperity, and a better quality of life for all. Our success factors revolve around a clear strategic vision at the highest level, reinforced by effective urban planning and regulatory reforms, innovation and research and development, mobilisation of finance through public-private partnerships, and engagement of all relevant stakeholders.

“Green transportation is one of the key components of the UAE Green Agenda 2015-2030 that serves as the basis for the National Climate Change Plan of the UAE 2017-2050, and is a prime example of increasing resource efficiency, enhancing convenience, creating jobs and driving growth at the same time. Transportation also featured prominently in the UAE’s first Nationally Determined Contribution, submitted in 2015, that identifies several concrete steps to reduce the country’s carbon footprint. These include a fuel subsidy reform, a nationwide rail network, conversion to fleets fuelled by compressed natural gas, and multi-billion-dollar investments in light rail and metro systems.”