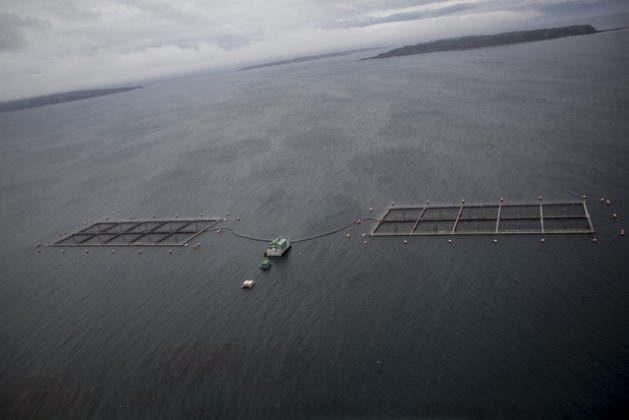 A view of salmon cages in the Pacific Ocean in Chile. In recent decades, salmon farming has become an important industry in Chile, but the impact on the environment and people's health has been questioned. Credit: Courtesy of Daniel Casado

BUENOS AIRES, Sep 10 2018 (IPS) - Questioned for its environmental and health impacts in Chile, where it is one of the country’s main economic activities, salmon farming is preparing to expand in Argentina from Norway, the world’s largest farmed salmon producer.
The news has triggered a strong reaction from civil society organisations.

“Argentina today has the advantage that it can refer to Chile’s experience, which has been extremely negative,” attorney Alex Muñoz, director for Latin America of National Geographic’s Pristine Seas programme, told IPS from Santiago, Chile.

“In Chile we have suffered the serious impacts of the activity carried out by both local and Norwegian companies. Salmon is native to the northern hemisphere and there is very clear scientific evidence that farming this species is not sustainable in the southern hemisphere,” added the environmental law specialist.

Muñoz is one of the authors of a highly critical report on the Argentine project presented by 23 Argentine and international organisations – such as the World Wildlife Fund (WWF), Oceana and the Wildlife Conservation Society (WCS) – grouped in the Forum for the Conservation of the Patagonian Sea and Areas of Influence.

"The effects of an industry that stretches 2,000 km along the Chilean coast have never been studied in-depth. Chemicals of all kinds are used to prevent disease and organic matter, food and fecal matter from salmon are dumped into the ecosystem.” -- Max Bello

The Forum is a network formed in 2004 to promote the care of the Atlantic Ocean in southern Brazil, Uruguay and Argentina and of the Pacific Ocean in Chile.

It was the visit to Argentina in March by King Harald and Queen Sonja of Norway, who met with President Mauricio Macri, which gave impetus to the initiative.

It would imply the introduction for the first time of an exotic species in the Argentinean sea, since this South American country has only up to now introduced fish in lakes and rivers.

On that occasion, Innovation Norway, a state-owned company and a national development bank that promotes Norwegian investment around the world, signed a cooperation agreement with the Argentine Agribusiness Ministry to study the implementation of “sustainable aquaculture” programmes in this South American nation.

Aquaculture is the farming of aquatic animals or plants in all types of water environments in controlled conditions. In the case of salmon in Argentina, feasibility studies are being carried out in the extreme south of Patagonia, off the Argentine coasts of Tierra del Fuego, the southern territory shared with Chile.

IPS’s questions about the project were not answered by the agriculture authorities of Tierra del Fuego province or by the Agribusiness Ministry, which on Sept. 3 was demoted to a secretariat as part of austerity measures aimed at cutting public spending in the midst of the country’s economic collapse. 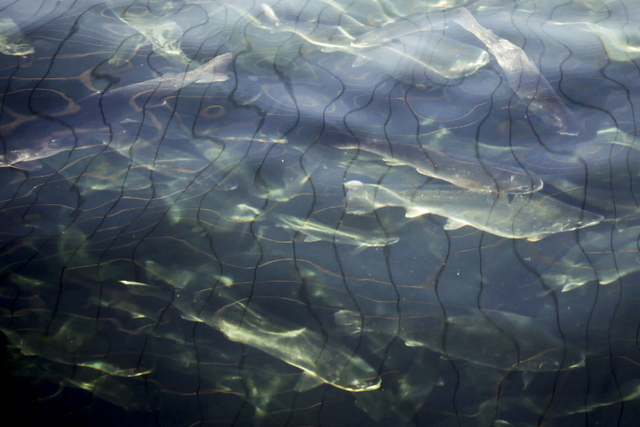 Salmon seen in the Chilean sea. Broken cages sometimes cause hundreds of thousands of fish to end up in open sea, generating negative impacts on native species. Credit: Courtesy of Daniel Casado

In March, the then minister Luis Etchevere stated that “our relations with Norway will allow us to benefit from that country’s more than 50 years of experience” in aquaculture, and added that “Tierra del Fuego can be a pioneer in development within Argentina.”

Norway, which has both wild and farmed salmon, is the world’s largest producer of this species that is consumed around the world for its taste and nutritional value.

In Chile, salmon farming in sea cages began more than 30 years ago on the island of Chiloé, about 1,100 south of Santiago, in the Los Lagos Region, and from there it grew and spread throughout Patagonia, to the Aysen and Magallanes Regions.

Today salmon is one of Chile’s main export products. Official figures indicate that the sector is expanding, since in 2017 exports amounted to 4.1 billion dollars, 20 percent up from the previous year.

According to Chile’s Salmon Industry Association, this year will be even better and sales to 75 international markets will generate more than five billion dollars.

According to the business chamber, the activity generates more than 70,000 direct and indirect jobs.

But “no amount of economic growth justifies the destruction of Patagonian ecosystems,” Max Bello, a Chilean natural resources specialist who has been working for 15 years in marine conservation organisations, told IPS from Santiago. 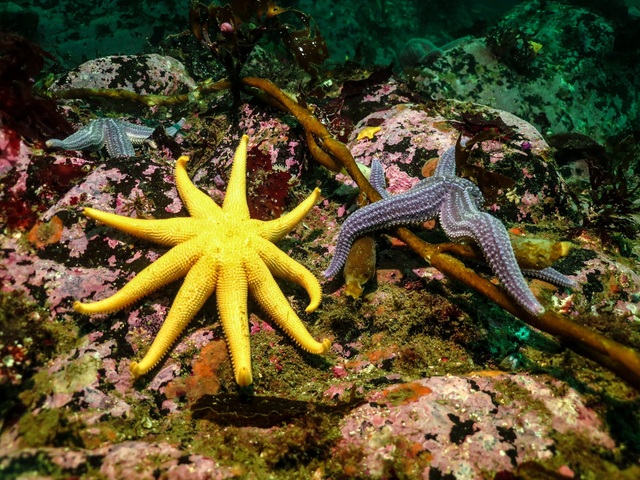 Starfish seen in the seabed of the Beagle Channel, in the Southern Atlantic Ocean, where the Argentine government is promoting the development of salmon farming. The so-called Patagonian Sea is considered one of the most productive oceanic areas in the southern hemisphere. Credit: Courtesy of Beagle Secrets of the Sea

Bello added: “The effects of an industry that stretches 2,000 km along the Chilean coast have never been studied in-depth. Chemicals of all kinds are used to prevent disease and organic matter, food and fecal matter from salmon are dumped into the ecosystem.”

“Salmon farming has spread in a brutal manner in recent years, affecting not only natural resources but also culture, as it has displaced other activities,” Bello said.

In Argentina, a country whoses population of 44 million mostly eats beef, fish are mostly for export.

The report presented by the Forum for the Conservation of the Patagonian Sea and Areas of Influence states that, besides the heavy use of antibiotics, the main problem posed by salmon farming is the frequent escape from the sea cages of fish that end up being an exotic species.

In fact, in July, during a storm, four of the five cages of a salmon farm owned by the Norwegian company Marine Harvest in Calbuco, near the city of Puerto Montt, broke and 650,000 salmon ended up in the sea.

“According to the law, the company has to recover at least 10 percent of the fish, because otherwise environmental damage is assumed,” biologist Flavia Liberona, executive director of the Chilean environmental foundation Terram, told IPS.

Regarding the use of chemical products, Liberona explained from Santiago that “because they are not in their environment, salmon in Chile are highly prone to diseases, which is why they use more antibiotics than in Norway.”

“In 2008 there was a major crisis in the industry due to the spread of a virus, which caused the loss of thousands of jobs,” she said.

Biologist Alexandra Sapoznikow, coordinator of the Forum for the Conservation of the Patagonian Sea and Areas of Influence, said “this activity has frequent crises and we are concerned that it is seen as a possibility for economic development. Tierra del Fuego receives tourists who are looking for nature, which is this province’s opportunity.”

Speaking to IPS from the Patagonian city of Puerto Madryn, Sapoznikow, who teaches Natural Resources Management at Argentina’s National University of Patagonia, added that the introduction of salmon farming would also come into conflict with the project that civil society organisations have been working on with the Argentine government to create marine protected areas in the South Atlantic.

In November 2017, the government sent to Congress a bill for the creation of two marine protected areas near Tierra del Fuego, which would extend the total conservation area from the current 28,000 square km to 155,000.

The initiative, however, has not yet begun to be discussed, while the Ministry of Environment – which drafted it jointly with the National Parks Administration – was demoted on Sept. 3 to a secretariat.