Women as Liberia’s Guardians of Peace 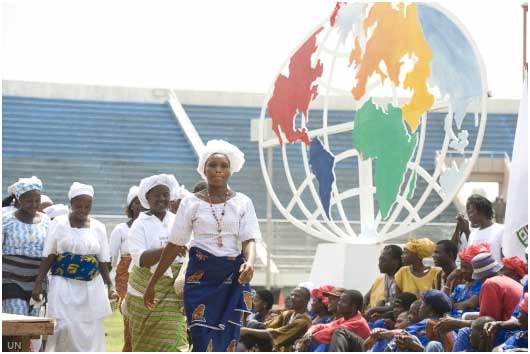 UNITED NATIONS, Oct 19 2018 (IPS) - Not long ago, images of child soldiers and the nation of Liberia were wedded in the minds of the international community. The country was struggling to end a horrific civil war, but military efforts were going nowhere.

Then the mothers, grandmothers and sisters of Liberia stepped forward and formed the Women of Liberia Mass Action for Peace campaign.

They pressured Liberian men to pursue peace or lose physical intimacy with their wives. Wearing all-white clothing, the women of Liberia’s capital, Monrovia, gathered at the fish market in the thousands, sitting, praying and singing. Their images were seen around the world.

“The women of Liberia say peace is our goal, peace is what matters, peace is what we need,” was their clear message, stamped on a billboard in the downtown fish market.

“The world once remembered Liberia for child soldiers,” said Leymah Gbowee, a leader of the peace group for which she won a Nobel Peace Prize in 2011. “They now know our country for the women in white.”

Their efforts, which continued until the nation’s first elections, were successful.

“We felt like the men in our society were really not taking a stand,” recalls Gbowee, who now heads the Women, Peace and Security Program at Columbia University in New York.

“They were either fighters or they were very silent and accepting all of the violence that was being thrown at us as a nation.… So we decided, ‘We’ll do this to propel the silent men into action.’”

The women demanded a meeting with then-president Charles Taylor and got him to agree to attend peace talks with the other leaders of the warring factions brokered by the Economic Community of West African States (ECOWAS), a subregional grouping.

The women perfected the art of “corridor lobbying,” waiting for negotiators as they entered and exited meeting rooms during breaks. Their action paved the way for negotiations taking place in Ghana, where a delegation of about 200 Liberian women staged a sit-in at the presidential palace and applied pressure for a resolution.

Dressed in white, the women blocked every entry and exit point, including windows, stopping negotiators from leaving the talks without a resolution. Their action, as well as the pressures mounted by ECOWAS leaders, led to the signing of the 2003 Comprehensive Peace Agreement.

“They would confront then-president [Charles] Taylor, insisting that he must give peace a chance; they travelled all the way to Ghana to confront the leaders of the warring factions as they were negotiating peace, urging them to sign a ceasefire agreement. Although the men of Liberia also played a role, the women were consistent and in the forefront.”

Liberian women’s political activism continued in the aftermath of the Accra peace accord through the period leading to 2005 elections, which brought Ellen Johnson Sirleaf to the presidency.

Observers note that through civic education and a voter registration drive carried out by women, Liberians had their voices heard and their votes counted.

Close to 80% of the Liberian women who flooded the polls during the country’s first postwar presidential election voted to usher a woman into power for the first time on a continent that for centuries had been the world’s most patriarchal. Ms. Sirleaf’s election was hailed as historic. “We have shattered the glass ceiling theory,” the then president-elect was quoted as saying.

President Sirleaf became the first democratically elected president in Africa. All in all, Liberian women have been a force against violence in the country, and their actions contributed to the ending of hostilities after a 14-year civil war. Subsequently there was a shift in focus to peacebuilding.

The women’s continued advocacy, with clear messages to the public, has led to their being considered community watchdogs, while they have also developed the concept of “peace huts,” where women receive leadership and entrepreneurship training.