Vladimir Bozovic is Advisor of Government of the Republic of Serbia 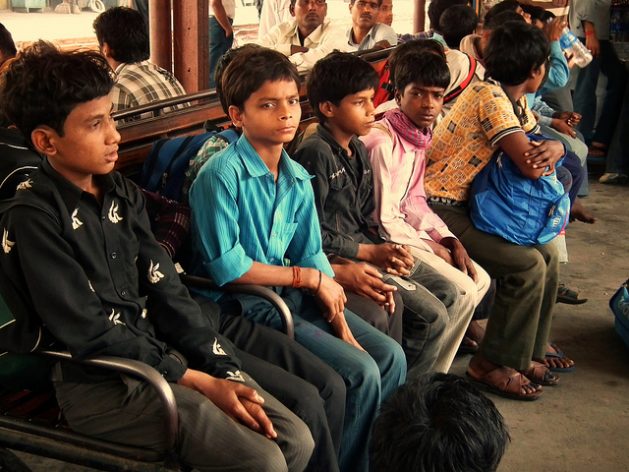 Child labourers rescued in Delhi waiting to be sent back to their villages. Credit: Bachpan Bachao Andolan.

BELGRADE, Serbia, Dec 18 2018 (IPS) - Entire human history is one great struggle for freedom. To many, slavery is a synonym for something in the past, for transatlantic slave trade, but, unfortunately, slavery still exists in many different forms.

Records show that over twenty seven million men, women and children still live today in conditions that characterized social form of the slave ownership. They are trapped in forced labor and debt bondage, in domicile work and forced marriages, or they are being exploited by the human traffickers. We can easily speak of slavery as of great tragedy, and the fact that in this day and age still exists, is a downfall of human kind.

Modern slavery is a challenge for every democratic country. Suffering is the same as in the past, but methods are more sophisticated and perfidious, and most of those who suffer are the ones that should be protected the most – poor and socially excluded groups, who often live on the margins of our society, and young women and children. This is not an imaginary problem, it does not happen only to someone else and somewhere else; rather, it is a real threat and anyone can fall victim to.

The very first challenge in fight against slavery must be a cognizance: we must confess a bitter truth that slavery has been weakened, but still exists. Human trafficking is one of the growing forms of transnational crime, characterized by high profit and low risk, and it is followed by a grave statistics. It is crime of economic nature, and most efficiently organized, and we are currently fighting it on inconsistent and fragmented way. That is the dark side of globalization.

The issue of modern slavery is globally recognized by the UN in its millennium goals. Goal 8 is dedicated to increasing labor productivity, reducing the unemployment rate, especially for young people, improving access to financial services and benefits, fight against modern slavery and child labor. So many activities around this particular global goal prove that we don’t live anymore in a selfish world where we don’t consider other nations and their problems. No, the world of todays opens up to the misery of others, and everybody everywhere has to be good, for us to feel good. Employed, productive populations, sustainable economic growth, decent jobs with equal opportunities for fair salaries, safe working environments, social protection, these are all values that will ensure the progress of the entire world, and the whole world will benefit from the creativity, business and innovation of the free people.

Plenty has been done in delivering the Goal 8. UN reports that the average annual growth rate of real GDP per capita worldwide increased, the number of children from 5 to 17 years of age who are working has declined, access to financial services through automated teller machines increased… Plenty has been done, but also plenty has to be done. Child labor remains a serious concern with more than half of child laborers participate in dangerous work and 59% of them work in the agricultural sector; labor productivity has slowed down, the global unemployment rate hasn’t changed from 2016, with women more likely to be unemployed than men across all age groups. Youth were almost three times as likely as adults to be unemployed… It is clear that efforts provide results, but there is still a lot of work to be done.

There was a time we thought that the slavery is forever beaten, only to come back to us in new forms and shapes. That is why the solution must be fresh and brave. The only final answer to this problem is for every country, every government, every agency to work together, to unite and create an Anti-Human Trafficking Coalition that will engage entire society in fight against this crime, and combine all our efforts in protecting our citizens. It should be understood that eradicating the human trafficking is not solely a mission for the police or law enforcement agencies, this is a fight at all levels of society. We should campaign through media with the message that will define the problem, and develop the clear strategy that will unite countries and governments, churches and religious organizations, NGOs, youth, academic communities, media and all other important representatives of the society in one efficient and effective action with clear mechanisms of measuring the results. Everything should be designed in the way that those results are realistic and visible to the present victims, and to provide prevention and protection for potential victims. Time has clearly shown us, that this is one thing we can’t beat alone, nationally, rather, it’s a nick of time to do it globally.