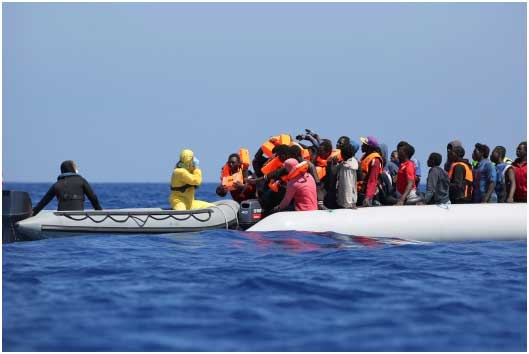 Rescue operations of African migrants carried out in the Channel of Sicily, Italy. Credit: IOM / Malavolta

Apart from the question of FDI, these influential leaders were looking at how to stem the flow of African migrants traveling to Europe in search of jobs and better lives.

“I believe in a win-win game. Let’s help Africa to succeed. Let’s provide new hope for African youth in Africa,” President Macron said in Nigeria, explaining that it was in Europe’s interest to tackle migration from Africa at its roots.

Africans on the road
Every day hundreds of Africans, including women and children, strike out in search of real or imagined riches in Europe or America. About a million migrants from sub-Saharan Africa moved to Europe between 2010 and 2017, according to the Pew Research Center, a Washington, D.C.–based nonpartisan fact tank.

While Ghana, Kenya, Nigeria, Senegal, Somalia and South Africa are the top way stations for sub-Saharan migrants moving to Europe and the US, Pew lists South Sudan, Central African Republic, São Tomé and Príncipe, Eritrea and Namibia as having some of the fastest-growing international migrant populations living outside their country of birth.

Africans are on the move because of “conflict, persecution, environmental degradation and change, and a profound lack of human security and opportunity,” states the International Organisation for Migration (IOM), in its World Migration Report 2018.

Migration corridors mostly used by Africans are Algeria to France, Burkina Faso to Côte d’Ivoire, Egypt to the United Arab Emirates, Morocco to Spain, and Somalia to Kenya.

When unregulated and unmanaged, migration can create “false and negative perceptions of migrants that feed into a narrative of xenophobia, intolerance and racism,” UN Secretary-General António Guterres noted at an event in New York last September.

“The narrative of migrants as a threat, as a source of fear, which has colored international media coverage on migration, is false,” said Mukhisa Kituyi, Secretary-General of the UN Conference on Trade and Development (UNCTAD), a UN body that deals with trade, investment and development issues, in an interview with Africa Renewal.

Orderly migration
The Global Compact for Migration, the first-ever inter-governmentally negotiated agreement on international migration, which was adopted in Marrakesh last week, could counter negative perceptions of migrants, experts say.

The IOM states the compact will help achieve “safe, orderly and regular migration,” referring to it as an opportunity to “improve the governance on migration, to address the challenges associated with today’s migration, and to strengthen the contribution of migrants and migration to sustainable development.”

The compact consists of 23 objectives, among them mitigating the adverse drivers and structural factors that hinder people from building and maintaining sustainable livelihoods in their countries of origin; reducing the risks and vulnerabilities migrants face at different stages of migration by respecting, protecting and fulfilling their human rights and providing them with care and assistance; and creating conditions that enable all migrants to enrich societies through their human, economic and social capacities, and thus facilitating their contributions to sustainable development at the local, national, regional and global levels.

The compact also refers to enabling faster, safer and cheaper transfer of remittances and fostering the financial inclusion of migrants; ensuring that all migrants have proof of legal identity and adequate documentation; and providing migrants with access to basic services.

The Global Compact for Migration is not legally binding, but its provisions can be a powerful reference point for those formulating immigration policies as well as for human rights advocates in the face of mistreatment of migrants.

Negative attitudes or even violence against migrants typically stem from fears that they take jobs away from native-born citizens or that they engage in criminal activities, according to a study by the South Africa–based Human Sciences Research Council (HSRC), a statutory research agency.

In the HSRC study, which focused on South Africans’ attitudes toward immigrants, 30% of the public blamed foreigners for “stealing jobs from hardworking South Africans,” while another 30% pointed to immigrants’ criminal activities.

But IOM South Africa countered that “immigration does not harm the long-term employment prospects or wages of native-born workers,” adding that “migrants are twice as likely to be entrepreneurs [as] South African nationals.” The South African government regularly condemns xenophobic attacks.

Economic perspective of migration
Mr. Kituyi said that most migration studies focus on “the plight of migrants, the crisis of international solidarity or humanitarian challenges.” He wished that more attention were paid to migration from the perspective of economic development.

Ms. Lúcia Kula, an Angolan migrant who is a researcher in the UK, concurred, adding that conversations about migration should shift to the migrants’ contributions to their new society.

“One of the main things they [immigrants] do in the economies they get into is create value. They enter niches where they are more competitive…and it can boost the local economy,” Mr. Kituyi elaborated.

Many migrants are talented professionals and offer expert services in their new countries. Iso Paelay, for example, left Liberia in the heat of the war in the 90s and resettled in Ghana, where he became a star presenter for TV3, a leading media house in the country. Apparently, Liberia’s loss was Ghana’s gain.

Mr. Kituyi points to a phenomenon of migrants going to other countries to engage in the ethnic food business. “They start creating routes to get food from their home country,” he said. Ethiopian restaurants in Nairobi, Kenya, including Abyssinia, Habesha and Yejoka Garden, serve Ethiopian dishes such as injera.

Abuja International Restaurant in Union, New Jersey, sells Nigerian food such as eba, amala and fufu and the popular beer Gulder. In New York, Africans and others throng “Little Senegal,” a single street in Harlem, to shop for anything African—foodstuffs, music CDs, hair products, religious items and finely tailored clothes.

While working hard, earning money and making contributions to their new countries, African migrants also “remit small monies back home to support their families,” explained Mr. Kituyi. “Eighty-five percent [of immigrants’ earnings] goes to the host country and 15% to the country of origin through remittances.”

“A good chunk of the money I make here [in the US] I spend here; I pay my bills and get things for myself. I remit some to upkeep my parents,” concurs Ms. Christy Emeagi, a lawyer who left Nigeria “because I wanted a better life for my unborn children.”

The inclusion in the Global Compact for Migration of ways to make remittances faster and safer will be sweet music to African migrants.

In 2017, remittance flows from migrants to sub-Saharan Africa were $38 billion, reports the World Bank. That is more than the $25 billion official development aid (ODA) to the region that year.

Currently, says Mr. Kituyi, “it is painful to see an overly high cost of transaction mostly going to international payment services like Western Union, PayPal and so on.”

Achieving the objectives of the Global Compact for Migration may take some time, experts believe. Nevertheless, the compact’s immediate impact is that safe, orderly and regular migration is currently at the forefront of global conversation. And that is a step in the right direction.

*Africa Renewal is published by the United Nations