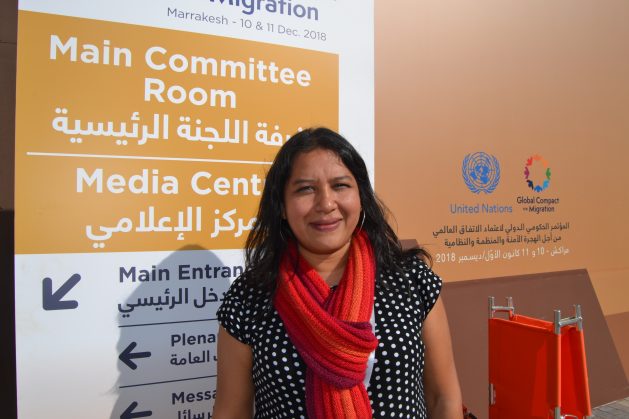 MARRAKECH, Morocco, Dec 12 2018 (IPS) - Claudia Interiano from Fundación para la Justicia y el Estado Democratico de Derecho, a Latin American organisation that works to access justice for persons killed or missing during transit through Mexico to the United States, spoke to IPS about the foreseeable future of migration in a world after the end of the Global Compact for Safe, Orderly and Regular Migration (GCM) conference.

Inter Press Service (IPS): What does your organisation do?

Claudia Interiano (CI): My organisation works to access justice—we seek to restore human rights for migrants, for people who have disappeared during journeys, particularly women, and we are also part of the Latin American Block, a network of non-governmental organisations in the region.

IPS: Following the adoption of the Global Compact on Migration, what is the way forward?

CI: That is a good question and a big one. For us, we have been working on all of these things, women issues, people who disappear, human rights of migrants and their families, for many years. What the Global Compact for Migration means for us is that it is a tool, because the whole world has been negotiating and having conversations that have now advanced. Before, migration has not been taken as importantly as it needs to be.

From here, we go back to our countries and will have to sit down with the states of origin, the states of transit and the states of destination involved in migration. As every state has its own difficulties, we as the civil society need to ask for the introduction of these policies the governments have agreed in Marrakesh and laid out by the GCM.

For example, objective eight of the Compact concerns the exchange of information about people who disappear, and trying to save lives through coordinated international efforts. We are going to ask governments to support the rights of migrants, and to ask what their polices are going to be to represent people’s voices in each country.

IPS: Will the Global Compact for Migration help your work as a civil society organisation?

CI: Yes, I think so. It’s going to be a tool, not a solution for all the problems we have in our countries. The Global Compact for Migration will be a way to push governments to ask them to implement what they agreed to, because it is their responsibility.

IPS: The Global Compact for Migration is not legally binding, so how will it work?

CI: That is an interesting thing, and that could be an advantage because it starts political discussions and agreements. It starts the conversation: it is like the first step to the development of migration that the world needs. In the beginning, it may not work as it should: some governments may not want to commit. But at least they will have started the conversation.