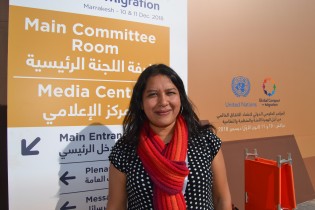 By Steven Nsamaza
Claudia Interiano from Fundación para la Justicia y el Estado Democratico de Derecho, a Latin American organisation that works to access justice for persons killed or missing during transit through Mexico to the United States, spoke to IPS about the foreseeable future of migration in a world after the end of the Global Compact for Safe, Orderly and Regular Migration (GCM) conference.

By Steven Nsamaza
Safe, orderly and regular migration received support today, Dec. 10, with the adoption by 164 countries of the first-ever inter-governmentally negotiated agreement to cover all dimensions of international migration.
ADVERTISEMENT ADVERTISEMENT