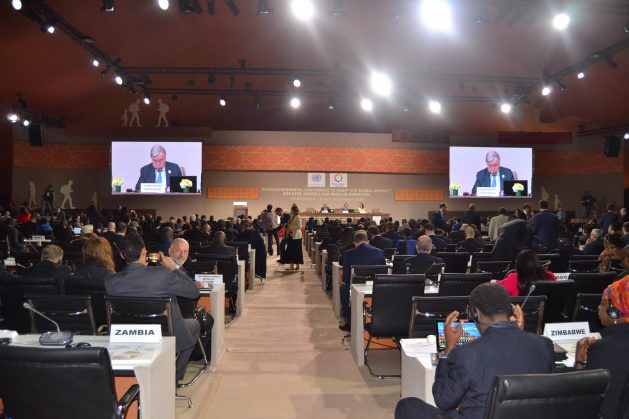 After a few last-minute hitches, including more international tension and argument than was welcome, the intergovernmental conference taking place in the Moroccan city of Marrakech agreed to a Global Compact for Safe, Orderly and Regular Migration (GCM), a proactive document that will guide States on all matters related to migration.

Well timed to coincide with the 70th anniversary of the Universal Declaration of Human Rights, the historic adoption of the GCM was presided over by United Nations Secretary-General António Guterres who urged countries to treat the Compact as an obligation to human rights that will benefit all.

“We are not establishing a new right to migrate. No. There is not a right for anyone to go anywhere at any time according to his or her whim,” Guterres said during the official ceremony to adopt the Compact. “What we are establishing is the obligation to respect the human rights of migrants—which of course is absolutely obvious when we at the same time celebrate the 70th anniversary of the Universal Declaration of Human Rights. It would be unconceivable to exclude migrants from the scope of the Universal Declaration.”

The conference was preceded by increasing concerns about certain U.N. member States not supporting the Compact. Some declined outright to participate and adopt the Compact, while others said their final decision must await further internal deliberation. The United States was the most notable and voluble naysayer, condemning the compact and labelling it a violation of national sovereignty.

“We believe the Compact and the process that led to its adoption, including the New York Declaration, represent an effort by the United Nations to advance global governance at the expense of the sovereign right of States to manage their immigration systems in accordance with their national laws, policies, and interests,” the U.S. government said in a national statement released on the eve of the conference.

Other countries who bridled against the compact or refused to sign it include Hungary, Australia, Israel, Poland, Slovakia, the Czech Republic, Austria, Switzerland, Bulgaria, Latvia, Italy, Switzerland and Chile.

“It will make an enormous positive impact in the lives of millions of people—migrants themselves, the people they leave behind and the communities that will then host them,” said Louise Arbour, the U.N. Special Representative for International Migration.

“This of course will depend on capturing the spirit of today’s event to move to the implementation of the multiplicity of initiatives that this Global Compact will permit member states to put in place. I am delighted to echo the words of the Secretary-General: it is a wonderful occasion, really a historic moment and a really great achievement for multilateralism.”

The adopted Compact lays out 23 objectives covering all aspects of migration, with each having a general goal and catalogue of possible actions that can be implemented by member states. German Chancellor Angela Merkel has drawn enormous criticism for her decision to welcome hundreds of thousands of refugees from places like Syria and Afghanistan to her country. It is a decision that may well have cost her another term in power as she recently announced she will not seek re-election. However,  Merkel remarked that the adopted Compact is “about nothing less than the foundation of our international cooperation.”

Such potential significance has attracted to the conference, in addition to high-powered diplomats and officials, approximately 400 non-governmental organizations from civil society, the private sector and academia, and over 700 registered press.

The ceremony adopting the Compact also included speaker Cheryl Perera, a prominent representative of migrant communities, and founder of OneChild, a non-governmental organization which seeks to eliminate the commercial sexual exploitation of children abroad. She called for an end to the drivers of irregular migration on the large scale, and for better protection of migrants on the smaller scale.

“We must do better together,” Perera said. “It is important that we involve the private sector, specifically the national airlines, hotels and others to protect children from trafficking.”