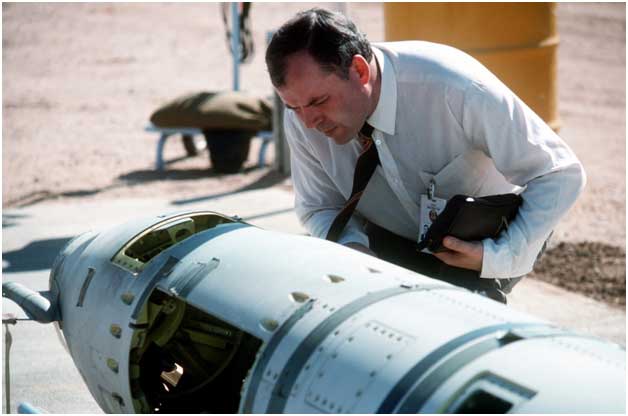 A Soviet inspector examines a BGM-109G Tomahawk ground-launched cruise missile prior to its destruction pursuant to INF Treaty, October 18, 1988, at Davis-Monthan US Air Force Base in Arizona. Credit: US Department of Defense

NEW YORK, Jan 2 2019 (IPS) - A hard-earned lesson of the Cold War is that arms control reduces the risk of nuclear war by limiting dangerous deployments and, even more important, by creating channels of communication and understanding. But President Donald Trump and his National Security Advisor John Bolton appear to have forgotten, or never learned, that lesson.

In late October, Trump announced an intent to withdraw from the Intermediate-Range Nuclear Forces (INF) Treaty. Secretary of State Mike Pompeo subsequently stated that the US will suspend implementation of the treaty in early February. While US signals have been mixed, initiation of withdrawal at that point or soon thereafter appears likely.

Agreed to in 1987 by the United States and the Soviet Union, the INF Treaty prohibits the two countries from deploying both nuclear and conventional missiles with ranges between 310 and 3420 miles.

The main reason cited for withdrawal is that Russia has tested and deployed ground-launched cruise missiles the treaty prohibits. Russia denies that the missiles violate the treaty and has made its own accusations, foremost that US ballistic missile defense launchers installed in Eastern Europe could be used to house treaty-prohibited cruise missiles.

On December 21, the United States opposed a Russia-sponsored UN General Assembly resolution calling for preservation of the treaty and for the two countries to consult on compliance with its obligations. The Russian representative said that US withdrawal “is the start of a full-fledged arms race.”

The US representative conveyed that the only way to save the treaty is for Russia to stop violating it. On behalf of the European Union, which opposed the resolution as a diversion, an Austrian diplomat said that erosion of the treaty will have critical consequences for Europe and beyond, dialogue between the US and Russia remains essential, and Russia should demonstrate compliance.

A representative of China, which supported the resolution, said the treaty is important for global stability, and cast doubt on prospects for making it multilateral. The General Assembly rejected the resolution by a vote of 46 against to 43 in favor, with 78 abstentions.

The INF Treaty allows either party to withdraw on six-month’s notice “if it decides that extraordinary events related to the subject matter of this Treaty have jeopardized its supreme interests.” The treaty also includes a bilateral mechanism for resolving disputes over compliance. The Trump administration has firmly asserted that Russia has violated the treaty, and NATO states have backed that assertion.

But the administration has not made the case that the missiles in question pose a threat that significantly affects the military balance between Russia and the very large and capable forces of the United States and its NATO allies, much less constitute an “extraordinary” development jeopardizing US “supreme interests.”

On December 14, a Russian official stated that Russia is open to mutual inspections regarding claimed violations.

Nor has it been demonstrated that peace and stability in that region or the world will be enhanced by repudiating the treaty rather than seeking more comprehensive arms control measures aimed at braking an emerging multipolar arms race. Further, in either Europe or Asia, US ground-based intermediate-range missiles would have to be deployed in other countries.

This likely would spark opposition from their populations—a factor that three decades ago contributed to the negotiation of the INF Treaty itself.

In sum, the INF Treaty should not be abandoned lightly. It remains a key element of the arms control framework limiting nuclear weapons and arms racing. Often forward deployed and intermingled with other forces, the missiles the treaty prohibits are among the weapons most likely to lead to miscalculation or misadventure in a crisis.

And the danger of crisis miscalculation, of a disastrous misunderstanding of an adversary’s mindset, is real. At the time the INF Treaty was being negotiated, some US strategists viewed their nuclear-armed missiles in Europe as useful for convincing “demonstration” shots to show a commitment to defend Europe with nuclear weapons with less risk of escalation to a catastrophic nuclear war.

A 1987 Washington Post article summarized NATO thinking: “A final advantage of the INF weapons is that NATO planners believe that they could use a single Pershing II or cruise missile, rather than another nuclear weapon, with somewhat less risk of triggering an all-out nuclear war.”

But we now know that Soviet military leaders, strongly influenced by the World War II national trauma of a homeland devastated and millions dead, saw things quite differently. In an article published in Survival only last year, Alexei Arbatov, a Russian arms negotiator and parliamentarian, notes that in 1983 Marshal Nikolai Ogarkov, head of the Soviet General Staff, made clear that the Soviet Union would not allow itself to be taken by surprise, as it had been in 1941. Ogarkov stated, “We will start the offensive if we are obliged to do it, and as soon as we discover the first evidence of the beginning of nuclear attack by NATO.” And in so doing, he said, “We will deliver dozens and, if need be, a hundred nuclear strikes to break through NATO’s deep defense echelon.”

Arbatov recounted this little-known history to support a subtle but critical point about arms control. Even when prospects for arms control progress seem dim, constant efforts to negotiate create channels of communication that are invaluable in a crisis. They also build institutions devoted to understanding not only the capabilities of an adversary but also their intentions, their fundamental interests and their deepest fears.

But a long hiatus in serious arms control efforts and a climate of deepening hostility have eroded the diplomatic and military-to-military contacts between Russia and the United States. And in the triumphalism of the long post-Cold War period, U.S. arms control institutions such as the Arms Control and Disarmament Agency were downgraded or allowed to atrophy.

With tensions growing among nuclear-armed countries in potential flashpoints from Ukraine to the South China Sea, it is long past time to rebuild the capacity of the US government to negotiate intelligently with its nuclear-armed adversaries.

The best course would be to use the dispute over the INF Treaty as a moment to renew, rather than discard, the negotiating frameworks and institutions that played a significant role in avoiding catastrophe during the Cold War.

However, Trump and Bolton have expressed general hostility to any international obligation that might limit US use of force or military capabilities. Both see negotiations as a zero-sum game to be won or lost. Neither seems capable of imagining international agreements that benefit all parties and make the world a safer place.

So Congress must act, to preserve enough of a fragile status quo to leave space for future diplomacy. As former senator Russell Feingold has explained, there is a legitimate question as to whether it is constitutional for a president to withdraw from a Senate-ratified treaty over Congressional opposition.

However, such core foreign policy controversies seldom are finally resolved by the courts. Congress in any case has the practical power to prevent the administration from taking action contrary to the INF Treaty. Most important, it can refuse to fund weapons testing, production, or deployment that would violate the treaty.

Senator Jeff Merkley and six colleagues already have introduced the Prevention of Arms Race Act of 2018 (S.3667). It characterizes withdrawal from the INF Treaty without consultation with Congress as “a serious breach of Congress’s proper constitutional role as a co-equal branch of government,” and erects barriers to spending on missiles that would violate the treaty.

Despite intense antagonism during the Cold War, the US and Russia were able to negotiate agreements like the INF Treaty to address the riskiest elements of their nuclear confrontation. The time to start building a climate for negotiations is now. Waiting for a crisis may be too late.