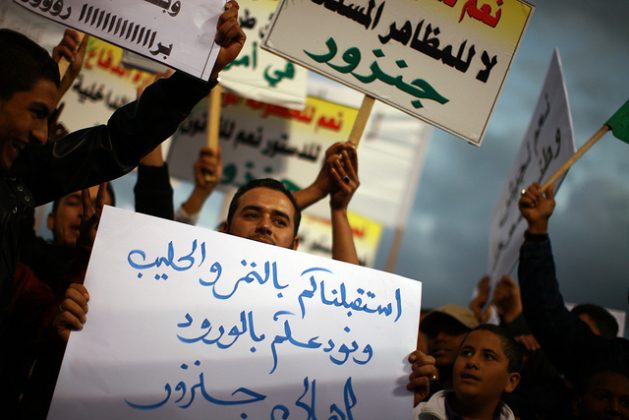 In a new report, Amnesty International reviewed the state of human rights in the Middle East and North Africa (MENA) and found a bleak landscape of repression. UN Photo/Iason Foounten

UNITED NATIONS, Feb 28 2019 (IPS) - Human rights violations are at an all-time high in the Middle East and North Africa, and global indifference is only making it worse.

In a new report, Amnesty International reviewed the state of human rights in the Middle East and North Africa (MENA) and found a bleak landscape of repression.

“Across MENA throughout 2018, thousands of dissidents and peaceful critics have been victims of shameless government violations on a shocking scale, amid deafening silence from the international community,” said Amnesty International’s Regional Director for MENA Heba Morayef.

By the end of 2018, all Saudi Arabian HRDs were in detention or serving prison terms, or had been forced to flee the country, Amnesty International found.

In February, Issa al-Nukheifi and Essam Koshak were sentenced to six and four years in prison respectively for their twitter posts criticising authorities and calling for human rights reforms.

The government also launched a wave of arrests targeting many prominent women’s human rights defenders including Loujain al-Hathloul and Aziza al-Yousef who campaigned against the ban on women driving and the male guardianship system.

Others even faced death for their work including Jamal Khashoggi whose brutal death prompted a global outcry.

In one case, the Saudi Arabia coalition attacked a bus in Sa’da governorate, killing 29 children and injuring 30 others.

Despite the many violations in international law and human rights, the United States, United Kingdom, and France continue to export weapons, enabling the Middle Eastern nation to commit even more violations.

While some countries such as Denmark and Finland suspended their arms sales, the action was only prompted by the killing of Khashoggi which still has not resulted in justice.

“Time and again, allies of governments in the region have put lucrative business deals, security co-operation or billions of dollars’ wroth of arms sales before human rights, fueling abuses and creating a climate where MENA governments feel ‘untouchable’ and above the law,” said Amnesty International’s Research and Advocacy Director for MENA Philip Luther.

“It’s time the world followed in the footsteps of states such as Denmark, Finland, the Netherlands and Norway which have announced suspensions…sending a clear message that flouting human rights has clear consequences,” he added.

Similarly, France and the U.S. continue to supply Egypt with weapons which have been used in the country’s widespread repression and crackdown on human rights.

According to Amnesty International, Egyptian authorities have arbitrarily arrested at least 113 people for peacefully expressing critical opinions, making it the most dangerous time and place in the country’s recent history.

Among those arrested were many senior political figures including the military’s former chief of staff Sami Anan who was arrested after he announced his candidacy in the presidential elections.

After speaking out against sexual harassment on social media, HRD Amal Fathy was sentenced to two years in prison and faces further charges including “membership of a terrorist group.”

Some have also been subject to enforced disappearances.

Human rights lawyers Ezzat Ghoniem and Azzoz Mahgoub were detained in March for their role in supporting families of forcibly disappeared individuals.

Though they were released six months later, they were forcibly disappeared and did not resurface until February when Ghoniem was brought to court wearing the same clothes he had on in trial in September. He told the court that he was kept in a hidden place and prevented from contacting his lawyers and family.

Amnesty International highlighted the need for international accountability and an end to human rights violations.

“For too long, the lack of international pressure to ensure that warring parties committing war crimes and other violations of international law are held to account has allowed perpetrators of atrocities across MENA to escape unpunished,” Luther said.

“Accountability is essential—not only to secure justice for victims of these crimes, but to help prevent an endless cycle of violations and yet more victims,” he added.

There have been some limited positive developments including the a lift on the ban on women drivers in Saudi Arabia but more needs to be done, said Morayef.

“These improvements are a tribute to courageous human rights defenders across MENA and serve as a reminder to those who regularly risk their freedom to stand up against tyranny and speak truth to power that they are planting true seeds of change for the years to come,” she continued.