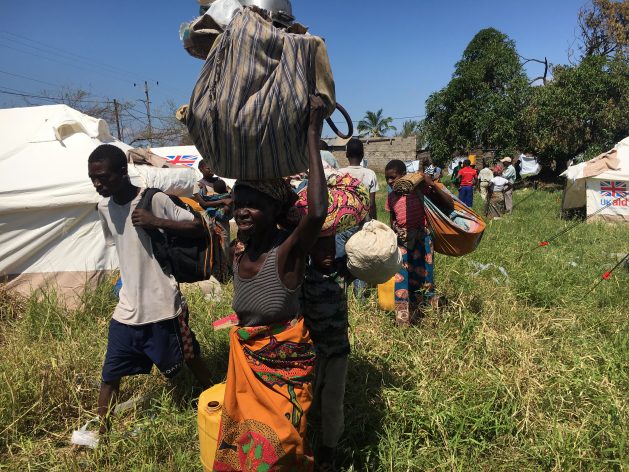 Tropical Cyclone Idai made landfall on Mar. 14 and 15, destroying some 90 percent of Beria, the capital of Sofala province, according to reports. A majority of those affected are living in makeshift camps as they try to rebuild. Credit: Andre Catuera/IPS

MAPUTO, Mar 29 2019 (IPS) - The city of Dondo, about 30 kilometres from Beira, central Mozambique, didn’t escape the strong winds of Cyclone Idai. It is estimated that more than 17,000 families were displaced and more than a dozen schools were destroyed in the city.

While the world has rallied around Mozambique and countries in Southern Africa affected by Cyclone Idai in order to provide aid, the smaller city of Dondo, which requires food and medical assistance, says it is not receiving enough.

Currently the Mozambique National Institute of Disaster Management (INGC), supported by international agencies, is providing aid to the area.
But in an interview with IPS, the mayor of Dondo, Manuel Chaparica, says that “the efforts have done until now is very little to the city of Dondo,” adding that “right now the support is directed to people who are in accommodation centres [schools or other buildings where people who lost their homes are being housed], but there are a lot of people in their homes with nothing to eat.”

Over 6,000 people are currently being housed in schools around Dondo. And Chaparica points out that “there is an effort to relocate all people housed at schools to resettlement centres in the Samora Machel and Macharote neighbourhoods, to allow for the resumption of classes in these schools.” 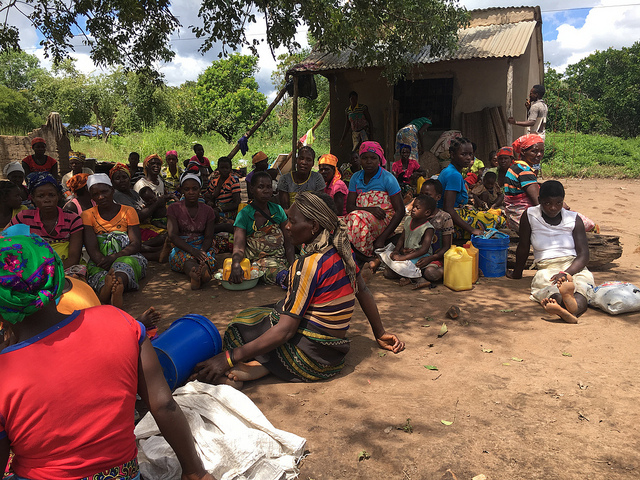 Across Mozambique more than 168,000 families (about 600,000 people) have been affected, the majority of whom are now living in makeshift camps in Sofala province. Of this number, more than 100,000 families are estimated to be from Beira where they have lost their homes and all their possessions. In addition, at least one million children and women require urgent assistance. Credit: Andre Catuera/IPS

Tropical Cyclone Idai made landfall on Mar. 14 and 15, destroying some 90 percent of Beria, the capital of Sofala province, according to reports. Idai produced torrential rains and strong winds of around 180 to 200 kilometres per hour, wreaking havoc in central Mozambique as well as in Malawi and Zimbabwe.

It’s caused catastrophic flooding in Mozambique with local authorities estimating that an area of about 3,000 square kilometres was destroyed.

Officially, the last numbers of the country’s death toll amounted to 493, with 1,523 people injured. The death toll for the region is estimated to be over 750.

Across Mozambique more than 168,000 families (about 600,000 people) have been affected, the majority of whom are now living in makeshift camps in Sofala province. Of this number, more than 100,000 families are estimated to be from Beira where they have lost their homes and all their possessions. In addition, at least one million children and women require urgent assistance.

“There are not exact numbers. They can change while new locals that were affected by flood are discovered,” said Celso Correia, the minister of Land and Environment of Mozambique, who coordinated the assistance team in Beira.

Around 15,000 people are still missing or unaccounted for largely from Dombe in Manica province and from Buzi and Nhamatanda in Sofala province. But the number could rise. Buzi village, which lies some 200 km from Beira, was badly affected by Cyclone Idai and 100s of people were seen hanging onto trees and the top of houses for 3 to 5 days, awaiting assistance and rescue. But it is suspected that many have since been swept away by the flooding caused by the rivers Buzi and Pungue.

According to the INGC, 3,140 classrooms were damaged, affecting more than 90,000 students. Also 45 health facilities were destroyed in the provinces of Sofala, Manica and Zambezia, center of the country. 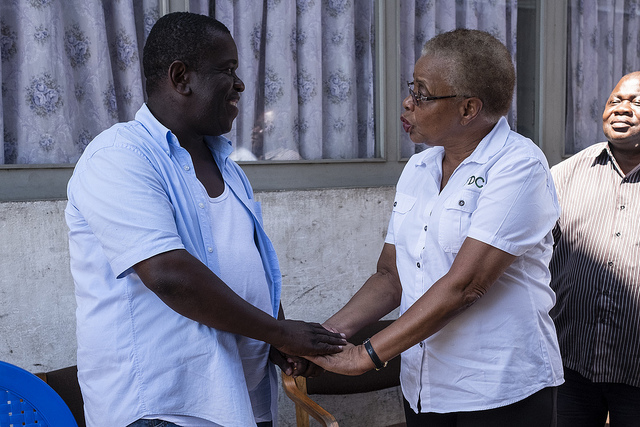 Graca Machel (right), Chair of the FDC (Foundation for Community Development), speaks to Davis Simango (left), Mayor of Beira, at a government facility that was damaged during Cyclone Idai. Credit: UNICEF

Solidarity and aid for those affected

Meanwhile, national and international organisations have gathered in Beira to help rescue and relief operations. More than 100 search and rescue specialists were deployed to assist people in Buzi and Nhamatanda, aided by 35 boats, 18 helicopters, 4 planes, 8 trucks and 30 satellite phones.
In the field, rescuers continue to find survivors. However, the Council of Ministers announced in Maputo, on Tuesday, Mar. 26, that soon the rescue operations will be closed as the rivers Búzi and Púngue are receding.

In Mozambique many solidarity movements were collecting donations for those affected in Beira.

“It’s the first time I’ve seen an intense movement of solidarity among Mozambicans,” says Joaquim Chissano, the former President of Mozambique, on Monday Mar. 25, after visiting the affected areas in the Sofala province.

The world has also joined Mozambique to help those affected by Cyclone Idai.
Internationally, various charities and NGOs have been providing support for food, money and the means to rebuild the city of Beira.

In addition, on Monday, the United Nations launched an international campaign to raise more than 282 million dollars to support the victims of Cyclone Idai and floods in Mozambique.

Beira is already trying to rebuild. But much of the infrastructure has been damaged, with the high winds downing electricity cables and telecommunications lines. The city was in the dark without electricity, water and communication after the cyclone made landfall. The national road Nº6 was also badly damaged. Beira was literally cut off from the rest of the world.

Former Mozambican first lady Graça Machel said at a press briefing this week that Beira would be the first city to go on record as being devastated by climate change.

“It is painful to say that my country and [Beira] will go down in history as having been the first city to be completely devastated by climate change,” said Machel.

But Davis Simango, the mayor of Beira, told the media on Tuesday Mar. 26 that still much remains to be done.

“Beira is destroyed,” reported Simango when interviewed by the Mozambican press.
“We need to do something, because there are many affected, living without food, who are homeless, penniless and without prospects to rebuild,” said Simango.

José Bacar, who lives in Beira, told IPS that “many people don’t have food”.
“There are people in the accommodations centres without food,” Bacar reported.
He said that the support given by the Government through the INGC wasn’t enough.

Diarrhea and Cholera in Beira and Buzi
While the water levels are receding in many areas, poor sanitation conditions are prevalent and fears are growing of the spread of cholera. Many families in Buzi are drinking directly from the river Buzi. In Beira and Buzi there have been reported cases of diarrhoea and cholera. In Beira, the municipal authorities confirmed the registration of deaths caused by cholera, according Simango.

“There are people who are dying by the cholera. We have the record of 5 deaths,” said Simango. This Thursday, Mar. 28, Beira’s health authorities confirmed 139 cases of cholera.

Simango appealed to people to be careful with the water and to treat it before consuming it. “If we have survived the cyclone Idai, it doesn’t make sense that we will die by cholera,” concluded Simango.
But Margarida Jone, a resident in Buzi village, told IPS in telephone interview this Wednesday, that they were trying to use chlorine to purify water, but even so, it remained unfit for human consumption.

Meanwhile authorities are advising communities about good hygiene practices, to prevent that the spread of the disease. The World Health Organization (WHO) announced that will promote a massive vaccination campaign against cholera in Beira and other vulnerable areas affected by the floods.
Mozambican health authorities are also worried about the possibility of increased cases of malaria in the areas affected by Cyclone Idai.