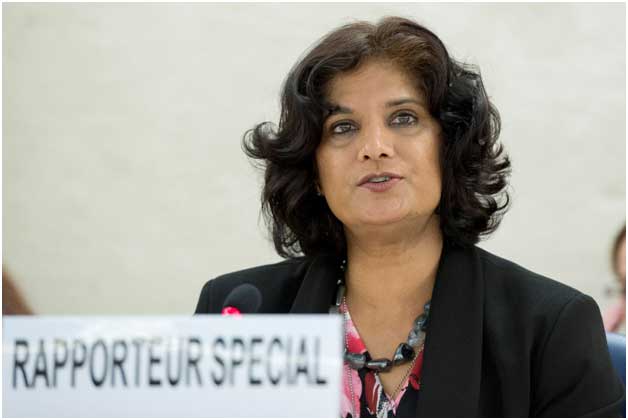 The UN mandate on “contemporary forms of slavery” includes, but is not limited to, issues such as: traditional slavery, forced labour, debt bondage, serfdom, children working in slavery or slavery-like conditions, domestic servitude, sexual slavery, and servile forms of marriage, according to Urmila Bhoola of South Africa, the UN Special Rapporteur on Contemporary Forms of Slavery.

In an interview with IPS, Bhoola pointed out that slavery was the first human rights issue to arouse wide international concern.
But it still continues today—“and slavery-like practices also remain a grave and persistent problem”.

Still, many UN member states who are suspected of such human rights violations refuse to permit international experts—designated as UN Special Rapporteurs — to either investigate allegations or even formally visit these countries, according to published reports.

Asked about these constraints, Bhoola said she he has so far visited Niger, Belgium, Nigeria, El Salvador, Mauritania, Paraguay and, lastly Italy, in October 2018.

Her mandate includes the implementation of Article 4 of the Universal Declaration of Human Rights (UDHR), which states that ‘No one shall be held in slavery or servitude: slavery and the slave trade shall be prohibited in all their forms”.

She said “country visits’ are only conducted upon invitation from governments”.

“I have issued requests for country-visits to many countries but due to the mandate’s name and focus, member states are often reluctant to invite the mandate on contemporary forms of slavery, to conduct a visit,” said Bhoola, who was appointed Special Rapporteur by the UN Human Rights Council back in May 2014.

In this sense, she pointed out, member states may not openly refuse a visit but may not reply to country-visit requests.

“This is, in my view, a pity, as my aim is to engage constructively with governments, and to support them in their efforts to end contemporary forms of slavery”.

In fact, some of the countries that are afraid of being named and shamed, perhaps because they are listed as countries where slavery is prevalent in global reports, “have many good laws and practices that others can learn from.”

Excerpts from the interview

IPS: The ILO says over 40 million people – 71 percent of them women and girls – are subject to various forms of modern slavery, including human trafficking, child soldiers, forced and early child marriages, domestic servitude and migrant labour. Can these malpractices be criminalized by national legislation or by an international treaty? How feasible are these measures?

However, slavery is considered to be a customary norm of international law that requires elimination by States irrespective of whether they have ratified the 1926 Slavery and 1956 Supplementary Conventions. All States are therefore required to prohibit slavery and its different forms, such as slavery like practices or servitudes, in domestic legislation.

In order to eradicate slavery effectively at the national level, States must also invest in sustainable development and in the protection and promotion of all human rights.

Many States have committed to achieving target 8.7 of the Sustainable Development Goals (SDGs) because ending slavery and creating decent work for all requires a multifaceted approach.

This requires them to develop comprehensive national responses to contemporary forms of slavery, which should combine the effective rule of law, robust institutional and policy frameworks, ending discrimination and inequality, including gender inequality, protection of labour rights, oversight of the business sector and ensuring full and equitable access to justice where rights have been violated.

Ending contemporary forms of slavery is therefore an integral part of the broader struggle to combat poverty, underdevelopment and gender inequality and achieve human rights-based development and justice for all.

IPS: As a UN Special Rapporteur on contemporary forms of slavery, how far does your mandate extend? Can you name and shame countries? Or is that an action that can be taken only by the Human Rights Council?

Also, I issue a public report on every country visit containing the findings of the mission as well as recommendations to the State visited and to other stakeholders. I report to both the Human Rights Council and the General Assembly and when these reports are presented governments engage with one another, including the government that has been the subject of a visit, and it is this constructive dialogue that is far more useful in my view in addressing gaps in compliance.

IPS: How many businesses comply with the UN Guiding Principles on Business and Human Rights? Since most forms of slavery occur in the private sector, how effective are these voluntary– not mandatory– guidelines in preventing modern forms of slavery in the work place?

BHOOLA: The Guiding Principles on Business and Human Rights were developed to clarify the different roles and responsibilities that States and companies have to address business impact on human rights

The Guiding Principles do not constitute an international instrument that can be ratified by States, nor do they create new legal obligations. Instead, they clarify and elaborate on the implications of relevant provisions of existing international human rights standards, some of which are legally binding on States, and provide guidance on how to put them into operation.

National legislation will often exist or may be required to ensure that these obligations are effectively implemented and enforced. This, in turn, means that elements of the Guiding Principles may be reflected in domestic law regulating business activities.

Even though the Guiding Principles are not legally binding, protecting human rights against business-related abuse is expected of all States, and in most cases is a legal obligation through their ratification of legally binding international human rights treaties containing provisions to this effect.

The State duty to protect in the Guiding Principles is derived from these obligations. In many States it is reflected—fully or partly—in domestic law or regulations on companies. Companies are bound by such domestic law. The corporate responsibility to respect human rights exists above and beyond the need to comply with national laws and regulations protecting human rights. It applies equally where relevant domestic law is weak, absent or not enforced1.

The Guiding Principles also validate the duty of States to protect against and redress business-related human rights harms. In the context of contemporary forms of slavery, this duty to protect could translate into a smart mix of measures to ensure that businesses engage in their responsibility to respect human rights, including through undertaking human rights due diligence throughout their supply chains and remediating the adverse impact of their operations on human rights.

At the very minimum, States should ensure that businesses realize the implications of purchasing products or services that have in any way been linked to forced labour or other contemporary forms of slavery.

To date, States have adopted diverse approaches to addressing this issue, which include ensuring criminal, civil and tort liability for business related human rights violations, setting up mechanisms to regulate such compliance in trade and consumer protection and addressing it in government procurement.

Disclosure and transparency can also feature as legal obligations rather than being limited to voluntary corporate social responsibility initiatives2 .

Although it is not possible to measure compliance by all companies, there are some key initiatives that should be cited, such as the Corporate Human Rights Benchmark (CHRB), which aims to identify which companies perform best on human rights issues. More information on this initiative and its more recent results can be found here.

Another important initiative with a focus on slaver is KnowTheChain, which identifies and shares leading practices, enabling companies to improve their standards and procedures. This initiative also aims to help companies protect the wellbeing of workers by incentivizing companies and identifying gaps in each sector evaluated. KnowTheChain published its first set of benchmarks in 2016, and the second set, covering more than 120 companies, in 2018. For more information, visit their website.

IPS: With the spread of technology worldwide, more and more women and girls are lured into human trafficking through technology, including Facebook. Does the UN have the means to fight this? Or is there a remedy at all?

IPS: The UK has a “call to action to end forced labour, modern slavery and human trafficking”. How effective is this? And are there any other countries with such action or legislation?

BHOOLA: The Call to Action to End Forced Labour, Modern Slavery and Human Trafficking was launched on the 19th September 2017 during the 72nd Meeting of the UN General Assembly, and it has been endorsed by the 84 Member States and Observer States.3

The Call to Action outlines practical actions that countries can take to achieve Target 8.7 of the UN Sustainable Development Goals, including to ratify and ensure the effective implementation of relevant international conventions, protocols, and frameworks; to strengthen law enforcement and criminal justice responses in order to rapidly enhance capacity to identify, investigate, and disrupt criminal activity; to put victims first; and to eradicate forced labour, modern slavery, human trafficking, and the worst forms of child labour from [their] economies […] by developing regulatory or policy frameworks, as appropriate, and working with business to eliminate such practices from global supply chains4 .

Information regarding government’s action following the endorsement of the Call to Action can be found here. Despite the positive progress, more needs to be done.

We cannot treat these issues of forced labour, contemporary forms of slavery and human trafficking in isolation, as these are complex crimes, and we need to reach out across borders and across mandates. The Call to Action provides the framework for countries to join up to share best practice and work together, and highlights the need for private and wider public sector engagement to deliver real change.

The United Nations University, in partnership with Alliance 8.7, have developed a knowledge Platform with funding from the UK Government which will accelerate the scientific study of “what works” and host an online data base with information on country action to support research and best practice: www.delta87.org/call-to-action

Australia has followed by passing its Modern Slavery Act in December 2018. The law requires businesses above a certain turnover threshold to take steps to identify slavery in their operations and supply chains, and report on the actions they have taken to address those risks.