Michel Forst is the United Nations Special Rapporteur on the situation of human rights defenders, and a speaker at the International Civil Society Week, 8-12 April 2019, in Belgrade, Serbia

GENEVA, Apr 1 2019 (IPS) - They are ordinary people – mothers, fathers, sisters, sons, daughters, brothers, friends. But for me they are extraordinary people – the ones who have the courage to stand up for everyone else’s rights.

They are the human rights defenders.

Last year, according to reliable sources, 321 of them were killed, in 27 countries. Their murders were directly caused by the work they do to ensure the rest of us enjoy the rights we claim as purely because we are human. 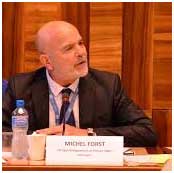 Countless others were tortured, raped and threatened, also for the work they do protecting their, and others’ human rights.

This is a task we are not performing well.

Since 2000, when we UN Special Rapporteurs on the situation of human rights defenders began our monitoring work, much progress has been made. There has been extensive discussion on how these courageous people should be protected, and there is a Protection Mechanism for Human Rights Defenders and Journalists in a limited number of countries.

Sadly, it is often not properly implemented, or funded.

It is impossible to canvass each defender’s particular treatment or mistreatment by the authorities they face, or even that of communities of defenders. There are, however, trends.

On 23 October last year, Julián Carrillo, an indigenous rights defender from Mexico’s state of Chihuahua told a friend by phone that he believed he was being watched and that he was going into hiding. On the evening of 25 October, his body was found. He had been shot several times.

Mr Carillo’s murder is indicative of the largest trend. More than two-thirds – a full 77% – of the total number of defenders killed were defending land, environmental or indigenous peoples’ rights, often in the context of extractive industries and state-aligned mega-projects.

Ms Gallardo’s murder represents another trend – the number of attacks on women and girls who are defenders is increasing. In the recent report that I have presented to the UN Human Rights Council I have highlighted that, in addition to the threats experienced by their male colleagues, women human rights defenders face gendered and sexualised attacks from both state and non-state actors, as well as from within their own human rights movements.

This includes smear campaigns questioning their commitment to their families; sexual assault and rape; militarised violence; and the harassment and targeting of their children.

Changing all this is our task for the future. Protection Mechanisms for Human Rights Defenders and Journalists need to be properly implemented and funded, at national level.

We need to empower defenders and increase the abilities of those who are responsible for their protection to keep them safe. We also need to improve the accountability mechanisms these officials operate under.

To properly defend the defenders, we also need to recognise their diversity, and that each one of them faces challenges particular to their individual circumstances. There is no one-size-fits-all answer to ensuring each defender is able to do their work unfettered.

We need to acknowledge that defenders, just like all of us, live in this modern, interconnected world.

Protecting them means covering all aspects of their safety: physical, psychological and digital. It means doing so with flexibility. It also means that our protection needs to extend to their families, and the groups and organisations they belong to. We need to speak to them about what they need to feel safe.

In recent years the world has taken a worrying turn away from respect for human rights. Increasingly, groups are becoming inward-looking, and nations nationalistic. We need human rights defenders now more than ever.

They also need us.