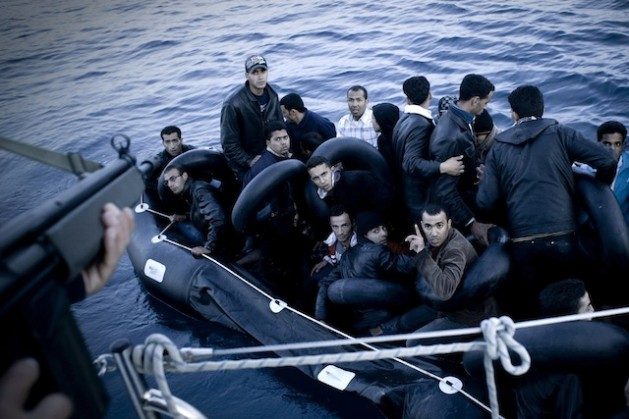 Migrants picked up by the Greek coastal guard in the Mediterranean. The European Union plans to expand its armed border guards from 1,500 to 10,000 by 2027 to patrol its land and sea borders. Credit: Nikos Pilos/IPS.

BRUSSELS, May 16 2019 (IPS) - The European Union plans to deploy 10 000 armed border guards by 2027 to patrol its land and sea borders. The force will have the power to use armed force on the EU’s external borders.

The EU guards would intercept new arrivals, stop unauthorised travel and accelerate the return of people whose asylum claim have failed. The guards could also operate outside of the bloc — with the consent of the third country governments concerned.

"The agency will better and more actively support member states in the area of return in order to improve the European Union’s response to persisting migratory challenges,"

According to the spending plan for 2021 to 2027 proposed by the European commission, the bloc will increase spending on migration and security by 20,3 billion euros.

The plan to strengthen the European Border and Coast Guard agency was announced by European Commission president Jean-Claude Juncker in a speech in Strasbourg in September last year.

“External borders must be protected more effectively,” he said.

“The agency will better and more actively support member states in the area of return in order to improve the European Union’s response to persisting migratory challenges,” European Commissioner for Migration and Home Affairs Dimitris Avramopoulos says.

Migration has been a divisive issue within EU since the big influx of refugees in 2015. Fears and concerns over migration have led to right wing parties gaining traction and being elected to government in a number of member states.

However European borders are under much less pressure than they were a couple of years ago. The number of arrivals to the EU fell from a height of over 1 million in 2015 to just 144 000 in 2018, according to the International organization for migration, IOM.

Rights groups have warned against creating a “Fortress Europe” with external processing camps and border guards able to use force.

“The EU strategy is to push asylum seekers and refugees away from EU borders. It raises the question what will be the legal pathways for people in need of protection. This is not going hand in hand with improvements of the asylum system. People are sent back to situations of abuse,” he told IPS.

Human Rights Watch have documented unnecessary violence by national border guards in Greece, Bulgaria and Croatia. Hungary is also locking up people at its border and depriving them of food.

“It is unclear how abuses by the new EU borders are going to be investigated. We see the risk of accountability gaps, ” Dam says.