Are Migrant Workers Humans or Commodities? 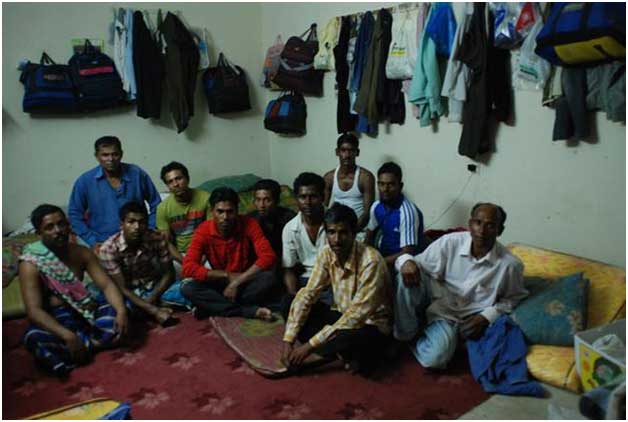 UNITED NATIONS, May 1 2019 (IPS) - The United Nations has estimated a hefty $466 billion as remittances from migrant workers worldwide in 2017—and perhaps even higher last year.

These remittances, primarily from the US, Western Europe and Gulf nations, go largely to low and middle-income countries, “helping to lift millions of families out of poverty,” says UN Secretary-General Antonio Guterres.

But most of these migrant workers are known to pay a heavy price, toiling mostly under conditions of slave labour: earning low wages, with no pensions or social security, and minimum health care.

As the United Nations commemorated Labour Day on May 1, the plight of migrant workers is one of the issues being pursued by the Geneva-based International Labour Organization (ILO), a UN agency which celebrates its centenary this year promoting social justice worldwide.

In a December 2018 report, the ILO said: “If the right policies are in place, labour migration can help countries respond to shifts in labour supply and demand, stimulate innovation and sustainable development, and transfer and update skills”.

However, a lack of international standards regarding concepts, definitions and methodologies for measuring labour migration data still needs to be addressed, it warned.

But much more daunting is the current state of the migrant labour market which has been riddled with blatant violations of all the norms of an ideal workplace.

Ambassador Prasad Kariyawasam, a member of the UN Committee on Migrant Workers, told IPS rising populist nationalism world over is giving rise to rhetoric with unfounded allegations and irrational assessments of the worth of migrant workers to economies of many migrant receiving countries in the world.

Since migrant workers remain voiceless without voting or political rights in many such receiving countries, they are unable to mobilize political opinion to counter assertions against them, he said.

“And migrant workers are now being treated in some countries as commodities for import and export at will, not as humans with rights and responsibilities,” said Ambassador Kariyawasam, a former Permanent Representative of Sri Lanka to the United Nations.

Unless these trends are reversed soon, he warned, not only human worth as a whole will diminish, but it can also lead to unexpected social upheavals affecting economic and social well-being of some communities in both sending and receiving countries of migrant workers.

At a UN press conference April 10, ILO Director-General Guy Ryder said the ILO Centenary is a time to affirm with conviction that the mandate and standards set by the Organization remain of extraordinary importance and relevance to people everywhere.

He called for a future where labour is not a commodity, where decent work and the contribution of each person are valued, where all benefit from fair, safe and respectful workplaces free from violence and harassment, and in which wealth and prosperity benefit all. 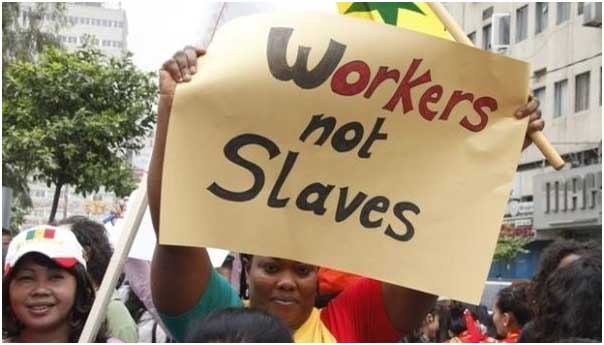 There are many cases in which women and girls in African countries are promised legitimate work and are then trafficked into prostitution. This happens within countries, across borders, and from Africa to places in Europe and the Middle East, she pointed out.

And recently, the police in Nigeria estimated 20,000 women and girls had been sold into sexual slavery in Mali:

The number of migrants is estimated at over 240 million worldwide. And an increasingly large number of countries, including Saudi Arabia, Qatar, Kuwait, Bahrain and the United Arab Emirates (UAE), are home to most migrant workers from Asia.

In a background briefing during a high-level plenary meeting of the General Assembly in April, the ILO said conditions of work need to be improved for the roughly 300 million working poor – outside of migrant labour — who live on $1.90 a day.

Millions of men, women and children are victims of modern slavery. Too many still work excessively long hours and millions still die of work-related accidents every year.

“Wage growth has not kept pace with productivity growth and the share of national income going to workers has declined. Inequalities remain persistent around the world. Women continue to earn around 20 per cent less than men.”

“Even as growth has lessened inequality between countries, many of our societies are becoming more unequal. Millions of workers remain disenfranchised, deprived of fundamental rights and unable to make their voices heard”, according to the background briefing.

In its 2018 review of Human Rights in the Middle East & North Africa, the London-based Amnesty International (AI) said there were some positive developments at a legislative level in Morocco, Qatar and the UAE with respect to migrant labour and/or domestic workers.

But still migrant workers continued to face exploitation in these and other countries, including Bahrain, Jordan, Kuwait, Lebanon, Oman and Saudi Arabia, in large part due to kafala (sponsorship) systems, which limited their ability to escape abusive working conditions.

In Qatar, a new law partially removed the exit permit requirement, allowing the vast majority of migrant workers covered by the Labour Law to leave the country without seeking their employers’ permission.

However, the law retained some exceptions, including the ability of employers to request exit permits for up to 5% of their workforce. Exit permits were still required for employees who fell outside the remit of the Labour Law, including over 174,000 domestic workers in Qatar and all those working in government entities.

In the UAE, the authorities introduced several labour reforms likely to be of particular benefit to migrant workers, including a decision to allow some workers to work for multiple employers, tighter regulation of recruitment processes for domestic workers and a new low-cost insurance policy that protected private sector employees’ workplace benefits in the event of job loss, redundancy or an employer’s bankruptcy, according to AI.

Meanwhile, as the ILO pointed out in a report in May 2017, current sponsorship regimes in the Middle East have been criticized for creating an asymmetrical power relationship between employers and migrant workers – which can make workers vulnerable to forced labour.

Essential to the vulnerability of migrant workers in the Middle East is that their sponsor controls a number of aspects related to their internal labour market mobility – including their entry, renewal of stay, termination of employment, transfer of employment, and, in some cases, exit from the country, the report noted.

Such arrangements place a high responsibility – and often a burden – on employers. To address these concerns, alternative modalities can be pursued which place the role of regulation and protection more clearly with the government.

This report demonstrates that reform to the current sponsorship arrangements that govern temporary labour migration in the Middle East will have wide-ranging benefits – from improving working conditions and better meeting the needs of employers, to boosting the economy and labour market productivity.

Meanwhile, in its ”Century Ratification Campaign”, ILO has invited its 187 member States to ratify at least one international labour Convention in the course of 2019, with a commitment to apply a set of standards governing one aspect of decent work to all men and women, along with one political commitment supporting sustainable development for all.