Poverty, policy and economic ruin? The true folly of neoliberalism 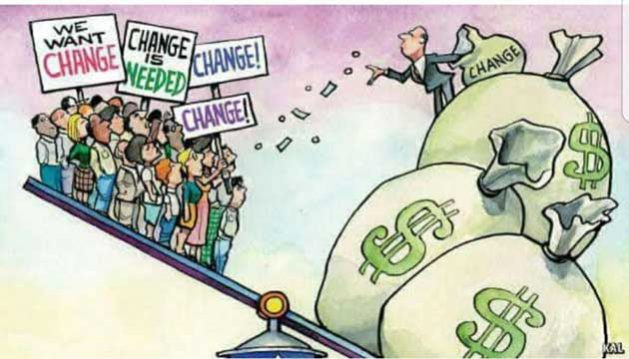 May 22 2019 - No matter which approach is used, every method of measurement shows inequality has risen in Bangladesh (at least) over the last 10 years. If we take the latest Household Income and Expenditure Survey of the Bangladesh Bureau of Statistics, we see that the country’s Gini coefficient—a measure of inequality—went up (indicating disparity has grown) from 0.458 in 2010 to 0.482 in 2016. From a different angle, a report released by Oxfam towards the close of last year ranked Bangladesh 148th in the world—out of 157 countries—for reducing inequality.

Around the same time, reports were coming out that the International Monetary Fund and the Asian Development Bank were forecasting Bangladesh’s economy to grow by 7.5 percent in the current fiscal year—illustrating a somewhat confusing contradiction of inequality rising significantly at the same time as GDP.

While some have since then dismissed this as inevitable, in reality that is far from the truth.

“The economic growth in recent years has been far from inclusive,” according to Selim Raihan, executive director of the South Asian Network on Economic Modeling. And is the result of failed economic policies—time-tested to have proven disastrous.

According to a 2018 Transparency International Bangladesh study, over 63 percent households seek healthcare from the private sector, which shows either a lack of availability of public healthcare facilities, or that they are abysmal—forcing people to seek treatment elsewhere.

And, according to a 2015 study by the health ministry, out-of-pocket (OOP) healthcare expenditure in Bangladesh was 67 percent—the highest in South and Southeast Asia—whereas the global average was 32 percent. Which shows the lack of government control over healthcare costs because the private sector has no meaningful competition from the public sector.

The combination of these two has been devastating. A study by the International Centre for Diarrhoeal Disease Research, Bangladesh, found that four to five million people were being pushed into poverty by OOP healthcare expenditures every year. Yet, the government has shown minimal interest in increasing its involvement in providing better healthcare service, even though healthcare is a quasi-public good in the sense that it benefits everyone in the community—and thus where government support should be focused on.

Public expenditure on education and health, which were already low, has declined in recent years. And “such low expenditure does not help…reduce poverty and inequality,” according to Raihan, whose view has been echoed by Zahid Hussein, lead economist of the World Bank’s Dhaka office who added that the poor are not “in a position to access privileges that the government gives to particular businesses and interest groups” such as “bailouts”, which have vacuumed away Tk 10,272 crore of government funds as of September last year, that could have gone into providing improved healthcare—not only to offset the aforementioned problems, but because that generally benefits less wealthy sections of society.

But that is just the tip of the iceberg.

In his book And Forgive Them Their Debts, professor of economics and economic history, Dr Michael Hudson, mentions how one of the first things the Babylonians, who first invented the concept of the Jubilee Year (derived from debt jubilee), realised was that “finance was not a part of the economy, but grew by its own mathematical laws.” Their scribes noted how while compound interest grew “at the equivalent of 20 percent a year, doubling in five years and quadrupling in 10,” their herd population and agriculture grew (GDP of ancient times) as an “S-Curve and tapered off”.

So, every ruler, going thousands of years back into history, knew that debts tended to grow faster than the economy’s ability to pay. Giving rise to the idea of debt jubilee—but with one catch: it was personal debts that were forgiven, not business debts or debts of the criminally rich who made their fortunes by borrowing from the public exchequer with the intention of never paying back.

During the last century (era of neoliberalism), everything somehow got reversed. And debt was turned from being “a balance sheet item to a growth item,” according to financial expert Max Keiser—popularising the perception that “the faster companies could incur debt”, the faster it could be “securitised” to “other banks to create this daisy-chain”, not only making debt “okay” but the “basis of the economy”.

This brought about a historic change because “never in history did people think that the way to get rich was to go into debt,” says Dr Hudson. And yet this was being done by countries “on a national level” to commit “economic suicide”.

What neoliberals failed to see was that money, despite being needed to buy a car or education, was not a factor of production. And that banks, in the process of giving people access to credit—which is an unproductive activity in itself as it produces nothing extra but simply allows someone to acquire what has already been produced—were simply extracting wealth out of the economy for themselves, and not even reinvesting it back into the economy.

Basically, finance became the tool for the ultra-rich to gain their “unearned” share from the “productive” activities of others. And instead of providing tangible services that balance the scale such as healthcare, the service that the government has been providing is the facilitation of this wealth extraction—which, to some extent, is the service of “you scratch my back and I’ll scratch yours” essentially.

Similar to every other country suffering from the curse of neoliberalism, parallel to the hollowing out of banks and government-backed extortion of the public exchequer, Bangladesh too saw huge amounts of money fleeing the country during this period.

In late January, the Global Financial Integrity released a report ranking Bangladesh second in South Asia for illicit money outflows. And said that some USD 5.9 billion was siphoned out of Bangladesh in 2015 through trade misinvoicing, after a report released in 2017 estimated that Bangladesh lost between USD 6-9 billion to illicit outflows in 2014. What has been the government’s (policy or any other) response? To do nothing—except siphon off more and more taxpayers’ funds and ship them into dying banks that seem to be taking the economy with them, to the grave.

In the process of extracting wealth from the real wealth producers, what these “real dependent” classes are doing is killing the Golden Goose that they rely on, which is why we see such capital outflows as the corrupt set aside their retirement funds before escaping to other countries.

But, have these people looked around properly? Nearly the entire world (especially developed countries) is under the thumb of neoliberalism. And so, those who believe they can profit by leeching off the productive powers of others in this country because of their “position” can only be the feed of others doing the same elsewhere.

Eresh Omar Jamal is a member of the editorial team at The Daily Star.