STOCKHOLM / ROME, Jul 30 2019 (IPS) - Sometime in the summer of 1974, I was leaning against the gunwale of the ferry between Calais and Dover, watching the moonlight streaming dark waters. When I turned to the left I found that a Chinese lady also looked out over the calm sea. What she told me changed my world view. 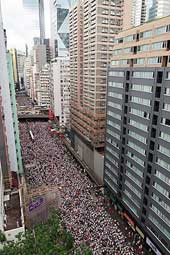 In 1950, Sweden became the first “Western” nation to acknowledge the People´s Republic of China (PRC) and during the following decades this small country came to enjoy a ”favoured status” among PRC leaders. As a young man, after reading Swedish translations of Tales from the Swamps and The journey to the West, I had become fascinated by Chinese culture. At the time, the Swedish press and many of my teachers spoke enthusiastically about the Cultural Revolution, but I did not as so many of my fellow students join the Swedish-Chinese Friendship Association with the hope of visiting China.

By the gunwale, the Chinese lady now told me: ”Most of you Europeans have a rosy view of China.” I wondered: ”How come? I don´t know much about your country.” She smiled and answered: ”The People´s Republic is not my country. I´m from Hong Kong where we are cosmopolitans, citizens of the world, not like Mainland Chinese who are isolated and indoctrinated. Their Cultural Revolution, which you seem to admire so much, is a complete disaster.” She continued:

We live in a different world, though far too close to Mainland China. My father is in charge of the police´s dog handlers. One of their tasks is to find corpses that have been washed ashore. Hundreds of trussed and mutilated bodies are by the Pearl River brought down to Hong Kong. It was worse in 1968 and 1969, but they still appear. I´ve heard that mainland Chinese are paid 15 Yuan [USD 2.50] or more for each corpse they fish up from the river. People are killed en masse. Education is neglected, cultural heritage smashed to pieces, they burn thousand-years old manuscripts and mock the elderly.

That short meeting made me suspicious of acclaims and condemnations of entire nations. After returning to Sweden I read Simon Ley´s Chinese Shadows and understood that unreserved tributes to the ”Chinese system” offered by most members of the Swedish press and authors like Snow, Myrdal, and Suyin had to be read with caution. Later on, I met Chinese dissidents at Lund University and came to realize that the Chinese lady had told me the truth. It is estimated that between 750,000 and 1.5 million people were killed during the Cultural Revolution (1966-1974).1 Millions more had been persecuted and forcibly displaced, while cultural and religious sites and artifacts were deliberately destroyed.

Much has changed since then, though when I now read about Hong Kong and hundreds of thousands of protesters crowding its streets I am reminded of the meeting at the Calais-Dover ferry. Protests were triggered by a proposed bill allowing for extradition of lawbreakers from Hong Kong to Mainland China, though they are now increasingly addressing concerns about Hong Kong´s independent staus. Hong Kong´s importance within the enormous PRC is shrinking. When Great Britain in 1997 handed over Hong Kong to China it´s GDP constituted around 20 percent of PRC´s economy, while it now is less than 3 percent.2 The economic growth of PRC has been extraordinary and it is now the world´s second-largest economy with a GDP at USD13.6 trillion, after the United States at USD20.4 trillion.3 Such power and wealth inspire PRC´s increasing efforts to make its mark as a sovereign superpower – economically, politically and culturally. When Xi Jinping in 2012 became Secretary-General of China’s Communist Party he launched a vision called The Chinese Dream. During the Party´s 19th Congress in 2017, Xi Jinping declared:

The mindset of the Chinese people has changed, from passivity to taking the initiative.
[…] We should pursue the Belt and Road Initiative as a priority [making] new ground by opening China further through links running eastward and westward, across land and over sea.4

The Belt and Road Initiative has, alongside ecological awareness and anti-corruption, become Xi Jinping’s signature project. Newly constructed, or improved, roads, ports, and railways will benefit China financially and connect it more closely with the rest of the world. A new Silk Road across Asia will be complemented with sea connections via the Malacca Strait, the coasts of Pakistan, Sri Lanka, and East Africa and across the Red Sea, as well as the Arctic Sea.

Hong Kong remains a key hub for investment in and out of China, though it is gradually losing its unique position, both financially and ideologically. Hong Kong has its own legal system and its civil rights include freedom of assembly and free speech. However, not all the 70 members of the territory’s Legislative Council are directly chosen by Hong Kong’s voters, most seats are occupied by pro-Beijing lawmakers.5

When Hong Kong was returned to China it was done under a principle called “one country, two systems”, meaning that it would enjoy a high degree of autonomy, except in foreign and defense affairs. Most people in Hong Kong are ethnic Chinese, though a majority of them do not identify themselves as such, at least not in the manner of the Government of PRC, which proclaims that all people of Chinese lineage are Chinese citizens, even after renouncing their Chinese citizenship. In his 2017 speech Xi Jinping declared:

Blood is thicker than water. […]Any separatist activity is certain to meet with the resolute opposition of the Chinese people. […] We will never allow anyone, any organization, or any political party, at any time or in any form, to separate any part of Chinese territory from China! China will never pursue development at the expense of others’ interests, but nor will China ever give up its legitimate rights and interests. No one should expect us to swallow anything that undermines our interests. […] We must rigorously protect against and take resolute measures to combat all acts of infiltration, subversion, and sabotage, as well as violent and terrorist activities, ethnic separatist activities, and religious extremist activities.6

In spite of Bejing´s insistence that it honours “one country, two systems” most Hong Kong citizens now fear that they might lose much of their autonomy. A fear fuelled by, among other concerns, the disappearance of five Hong Kong booksellers/publishers, who eventually re-emerged in custody in China. This affair also affected the hitherto friendly relationship between Sweden and China. One of the booksellers was namely the Swedish citizen Gui Minhai, who in 1988 came to Sweden as a twenty-five-year-old exchange student. After the massacre in Tiananmen Square, he applied for political asylum and eventually became a Swedish citizen. In 2012, Gui Minhai was one of the founders of Mighty Current, which in Hong Kong published serious sociological studies, as well as sensational stories about the debauched private lives of influential Chinese Communist leaders. In 2014, Mighty Current bought a bookstore and began to sell regime-critical literature, attracting customers from mainland China.

17 October 2015, Chinese agents broke into Gui Minhai´s summer residence in Bangkok and brought him to PRC, where he was imprisoned. Gui Minhais´s family alerted Swedish authorities but it took more than four months before Swedish representatives were allowed to visit Gui Minhai in prison. He then declared that he out of his own free will had severed his ties with Sweden and did not need any Swedish support, a statement he repeated four days later on the Hong Kong-based Phoenix Television. Seven months later, Swedish representatives were again allowed to visit Gui Minhai and he once more declined their help. However, after being transferred to house-arrest in his original hometown, Ningbo, Minhai apparently maintained contacts with Swedish authorities and when he by two Swedish diplomats in January 2018 was brought to a medical exam in Beijing (he suffers from amyotrophic lateral sclerosis) Minhai was forcibly abducted from the train by plain-clothes police officers.

It has been assumed that Chinese reluctance to release Gui Minhai, even after public confessions and the fact that he suffers from a deadly disease, might be the sensitive content of a book he was writing and planned to publish, The Collapse of Xi Jinping in 2017, which is said to contain damaging information about Xi Jinping´s private life.

Swedish activists accuse their government of a disgraceful submission under PRC´s economic power. In February this year, Sweden´s ambassador to China, Anna Lindstedt, invited Minhai´s daughter Angela Gui – who was born in Sweden, is a Swedish citizen and studies in the U.K. – to Stockholm. Lindstedt told Angela that she was going to meet with Chinese businessmen who had ”a new approach” to her father´s case. At a hotel in Stockholm Angela was offered a Chinese visa and an excellent job opportunty in PRC, apparently a means to silence her advocacy for her father´s release. Angela refused to co-operate7 and when the meeting was exposed in the press it was revealed that Lindstedt had acted without approval from the Swedish Ministry of Foreign Affairs and she was eventually replaced as ambassador.

The employment of approximately 60,000 Swedes is currently, directly or indirectly, dependent on Chinese companies. During the first half of 2018, Chinese companies invested USD 3.5 billion in Sweden – the highest foreign investment in a European nation. For obvious reasons, the Swedish Government is cautious when it comes to upsetting the feelings of the rulers in Bejing and it is a pity that such concerns make it reluctant to criticize PRC´s abuse of human rights.8 However, let us hope that PRC´s recent openness to the world, it´s massive investments in the development of poor nations and great interest in ecological issues eventually will be accompanied by an acceptance of free speech and support of human rights, not only globally, but also within PRC and Hong Kong.