Triumph of the Right is Changing the World Order

Katharina Hofmann de Moura holds a diploma in political science from the Free University (FU) Berlin. She currently leads the Brazil office of Friedrich Ebert Stiftung (FES). Before that she was the head of the FES Mozambique (2011-2016) and worked with the FES in Berlin and Shanghai. 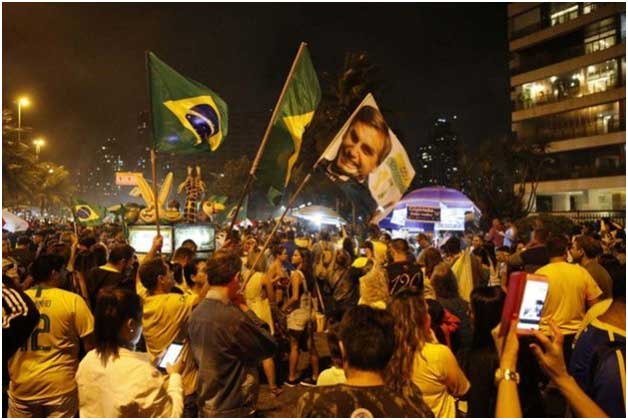 Supporters of president-elect Jair Bolsonaro celebrated his triumph in the early hours of Oct. 29, in front of the former captain's residence on the west side of Rio de Janeiro. The far-right candidate garnered 55.13 percent of the vote and began his four-year presidency on Jan. 1, 2019. Credit: Fernando Frazão/Agencia Brasil

SAO PAULO, Brazil, Aug 29 2019 (IPS) - The crisis of regional and multilateral institutions goes hand in hand with the international rise of right-wing populism. In the US, the UK, Russia, Italy, Poland, Hungary, Turkey, the Philippines and Brazil, we are experiencing the rise of right-wing populist politicians who throw headline-grabbing barbs at global compromises and the negotiating processes of supranational institutions such as the UN.

The more countries succumb to right-wing populism, the lower the chances of curbing climate change and social inequality and triggering the transition to a sustainable economic model.

While criticism of economic globalisation came predominantly from the left in the past, it’s currently becoming the core narrative of the Right. All over the world, right-wing populists are making protectionism the key theme of their regime.

They are using frustration with the social upheavals of neoliberal globalisation as a narrative. Job losses due to relocations, the decline of whole industrial sites, concerns about uncontrolled immigration and the search for identity in a multipolar world are skilfully exploited. The result is a historic, authoritarian-style populist ‘backlash’.

Despite their anti-globalisation rhetoric, however, the right-wing populists are not convincing protagonists against free trade. Rather, they are usually aligned with or even part of economic and financial elites. Their target group is the lower middle class who often does not actually benefit from their policies.

People in this electoral group feel that they are net losers from globalisation. In the populists’ promises, they see compensation for the perceived and sometimes real loss of national sovereignty.

Right-wing populists are making inroads into the centres of political power because they focus on the issues that are causing uncertainty and growing inequality: fear of downward social mobility, unemployment and lack of prospects.

The globalisation of right-wing populism

Alignment of these global right-wingers is progressing apace. For instance, current Brazilian president Jair Bolsonaro based his election campaign on Donald Trump’s strategy. ‘The Movement’, headed by Steve Bannon, Trump’s former election campaign advisor, has successfully forged links in Europe and Latin America as well as the US.

The formula is always the same: building up the national economy as a bastion against foreign influence while attacking the left for supposedly neglecting the interests of the majority of the population in favour of a ‘politics of identity’ geared towards minorities and a snobbish urban electorate.

The Western model of liberal democracy, so heavily influenced by Germany in the post-war era, is visibly ailing.

The right-wing populists rely on dividing society and pit various population groups and their interests against each other. Brazil provides a powerful example of this. ‘Only vegans are interested in nature,’ was Bolsonaro’s response to accusations of large-scale environmental destruction.

Accordingly, ‘America First’ has become ‘Brasil Primeiro’. The focus on neoliberal economic policy is underpinned with contemptuous remarks against minorities, extending as far as incitement to violence. Society is extremely polarised and the centre is fading away.

In a WhatsApp campaign focused on inadequate public safety and spiralling corruption, Bolsonaro managed to win the elections in the largest and, until the controversial removal of Dilma Roussef in 2016, most progressively governed country in Latin America.

The Brazilian election campaign is a good example of how right-wing movements use ‘social’ media to get closer to the people. They convey a sense of direct influence and apparent power and portray themselves on Twitter as ‘down-to-earth’.

Bolsonaro denies the authenticity of satellite images that show how deforestation of the Amazon has doubled since he took office, and summarily dismissed the director of the renowned INPE institute (Instituto Nacional de Pesquisas Espaciais) when it published the corresponding data.

Historical denial is also part of the package, such his ‘own account’ of the military dictatorship, shamelessly praising torture. Right-wing populist movements manipulate citizens and employ an anti-intellectualism, a hatred of the so-called ‘elite’ – which obviously means the educational rather than the economic elite.

The right-wing populist is a self-styled ‘straightforward man’ of the people. The anti-politician is coming to the fore. Ideological confrontation is the aim, not least in order to deflect from the results of his own economic policy – Brazil remains mired in an economic crisis, with growth of just 0.8 per cent.

The rise of right-wing populism is exacerbating the crisis of the international order. The unprecedented rise of China is weakening Europe’s position as a global democratic power, while also challenging the decades-long formula of ‘democracy combined with economic growth’.

Economic development just seems to be achievable more quickly without democracy, as democratic processes require votes and compromises and everything is based on dialogue. That’s why many countries in the South admire the rise of China and not division-wracked Europe.

The Western model of liberal democracy, so heavily influenced by Germany in the post-war era, is visibly ailing. Many analysts are already talking of the end of the liberal international order. Pressure on the European states will grow, as the upcoming emerging nations show no ambitions to assume regional or multilateral responsibility.

For instance, the Brazilian president says, ‘The Amazon is ours, not yours,’ and brooks no criticism from Europe. No international responsibility and no external interference is the guiding principle of authoritarian rulers.

Although it is currently weakened, Brazil has a well-organised left-wing civil society as well as trade unions and the Workers’ Party.

Gone is the optimistic era of global governance that only recently was largely shaped by the BRICS alliance (Brazil, Russia, India, China and South Africa). BRICS embodied the ‘rise of the South’, aimed at building a better world on an equal footing with the North.

The euphoria of multilateralism has since faded away. Whereas there were still hopes in the early 2000s that the emerging nations would become ‘anchor countries’, taking responsibility for regional integration and democratisation, most of their heads of state are now populists.

They too are looking for new alliances, but under different premises. So, the world is indeed converging, but only because of a growth in populism in Europe rather than an upturn in democracy in the South. Whole new alliances are being forged.

For instance, on the UN Human Rights Council, Bolsonaro is backing the Arab nations, which criticise the term ‘gender’ and jointly aim to stand up for ‘traditional family values’.

So what’s left for the left?

Left-wing governments cannot resolve this dilemma in the short term. The left’s partly self-inflicted loss of power because of its naive embracing of globalised free trade has been underestimated.

Now, business owners like Blackrock and the large multinationals have hit on a hitherto unknown form of capital accumulation that produces a form of wealth redolent of feudal times. Big corporations control social media, enabling them to build up their own influence even more and further undermine that of politicians (a phenomenon now known as ‘corporate capture’).

According to research by the Folha de São Paulo newspaper, owners of large stores and restaurant chains paid 12 million reais (€3 million) per WhatsApp campaign to service providers, ensuring mass distribution of lots of fake news against the Workers’ Party (Partido dos Trabalhadores) in the Brazilian election campaign. Bolsonaro’s supporters then forwarded this fake news to their individual contact lists in a snowball process.

Democratic politicians were no match for the right in terms of their method – but that’s alright, as it is illegal. Before the 2018 elections, election campaign financing by companies was banned for the first time in Brazil’s history. The above-mentioned business owners had to pay fines, yet the elections were declared valid.

However, the Brazilian left is using social media to mobilise protests, for example against cuts to the education budget and health and social programmes, against liberalisation of weapons laws, in favour of women’s and LGTBI rights, and against an unfair pension reform.

Although it is currently weakened, Brazil has a well-organised left-wing civil society as well as trade unions and the Workers’ Party. And they will not readily give into right-wing populism.