We need to empower young people to sustain our planet, and let peace and prosperity thrive says UN's Resident Co-ordinator in Kenya, Siddharth Chatterjee speaks to IPS on reflections on the ICPD25 Summit. 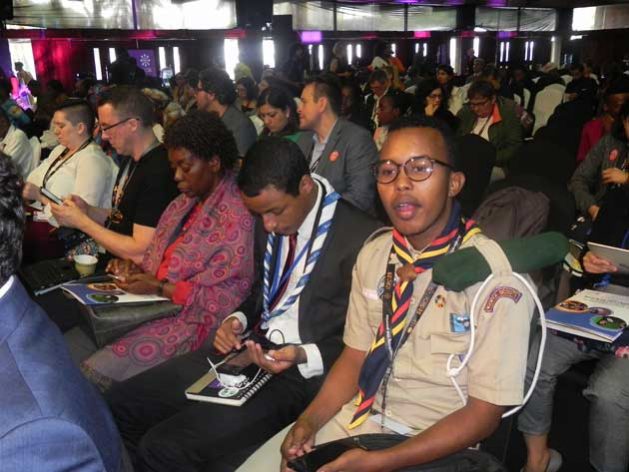 NAIROBI, Kenya, Nov 15 2019 (IPS) - Q: At ICPD25 we heard that women and girls are still waiting for the unmet promises to be met? DO you think this time around there is a commitment to ensure that these promises are met?

The Nairobi Summit is about the Future of Humanity and Human Prosperity.

We all have an opportunity to repeat the message that women’s empowerment will move at snail-pace unless we bolster reproductive health and rights across the world. This is no longer a fleeting concern, but a 21st century socio-economic reality.

We can choose to take a range of actions, such as empowering women and girls by providing access to good health, education and job training. Or we can choose paths such as domestic abuse, female genital mutilation and child marriages, which, according to a 2016 Africa Human Development Report by UNDP, costs sub-Saharan Africa $95 billion per year on average due to gender inequality and lack of women’s empowerment.

Fortunately, the world has made real progress in the fight to take the right path. There is no lack of women trailblazers in all aspects of human endeavour. It has taken courage to make those choices, with current milestones being the result of decades of often frustrating work by unheralded people, politics and agencies.

Leaders like the indefatigable Dr. Natalia Kanem the Executive Director of UNFPA and her predecessors, are pushing the global change of paradigm to ensure we demolish the silo of “women’s issues” and begin to see the linkages between reproductive rights and human prosperity. 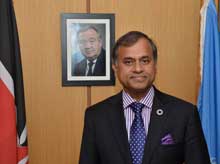 Numerous studies have shown the multi-generation impact of the formative years of women. A woman’s reproductive years directly overlap with her time in school and the workforce, she must be able to prevent unintended pregnancy in order to complete her education, maintain employment, and achieve economic security.

Denial of reproductive health information and services places a women at risk of an unintended pregnancy, which in turn is one of the most likely routes for upending the financial security of a woman and her family.

As the UN Resident Coordinator to Kenya, I am privileged to serve in a country, which has shown leadership to advance the cause of women’s right-from criminalizing female genital mutilation to stepping up the fight to end child marriage and pushing hard on improving reproductive, maternal and child health.

Q: At ICPD25 we heard that innovative partnerships are needed to ensure commitments to women and girls. 25 years on do you think this will happen? Can you site an example in Kenya or Africa on this?

Achieving the SDGs will be as much about the effectiveness of development cooperation as it will be about the scale and form that such co-operation takes. There is a lot of talk about partnership, but not enough practical, on-the-ground support to make partnerships effective in practice, especially not at scale.

Under the leadership of the Government of Kenya therefore, the UN System in Kenya in 2017 helped to spearhead the SDG Partnership Platform in collaboration with development partners, private sector, philanthropy, academia and civil society including faith-based stakeholders.

The Platform was formally launched by the Government of Kenya at the UN General Assembly in 2017 and has become a flagship initiative under Kenya’s new UN Development Assistance Framework 2018-2022 (UNDAF). As the entire UNDAF, the Platform is geared to contribute to the implementation of Kenya’s Big Four agenda in order to accelerate the attainment of the Country’s Vision2030.

In 2018, the Platform has received global recognition from UNDCO and the Dag Hammarskjold Foundation as a best practice to accelerate SDG financing. This clearly implies that we are on the right track, and as you can read in this report are developing a blueprint for how 21st Century SDG Partnerships can be forged and made impactful, but much more needs to be done.

Primary Healthcare (PHC) – in the SDG 3 cluster – has been the first SDG Partnership Platform window contributing to the attainment of the Universal Health Coverage as a key pillar of the Big Four agenda. We are living in a day and age where we have the expertise, technology and means to advance everyone’s health and wellbeing. It is our moral obligation to support Kenya in forging partnerships, find the right modalities to harness the potential out there and make it work for everyone, everywhere.

With leadership as from my co-chairs, Hon. Sicily Kariuki, Cabinet Secretary for Health in Kenya, and H.E Kuti, Chair of the Council of Governors Health Committee and Governor of Isiolo, and the strong political commitment, policy environment, and support of our partners we have in Kenya, I am convinced that Kenya can lead the way in attaining UHC in Africa, and accelerate the implementation of the ICPD25 agenda.

Q: Funding remains a crucial challenge- do you think there is a commitment to fund the initiatives?

Yes, there is a clear commitment to fund the ICPD Plan of Action.

I applaud partners whom have been doing so for long as the governments of Denmark, Netherlands, Sweden, Finland, Norway, and UK, and Foundations as the Bill and Melinda Gates Foundation.

But increasingly there is also the recognition that we cannot reach our ambitions through aid and grants.

At the global scale we need to let better regulation evolve for advancing greater equality and support to those furthest left behind.

Especially within middle-income-countries / emerging economies, our ICPD25 funding models need to be underpinned by shared-value approaches, and financed through domestic and blended financing.

I feel encouraged therefore by the Private Sector committing eight (8) billion fresh support to the acceleration of the ICPD Plan of Action.

Considering the trillions of dollars being transacted however by the private sector, this should be only the start and we should continue to advocate for bigger and better partnership between public and private sector targeting the communities furthest left behind to realize ICPD25.

Q: What do you think should be done to ensure young people’s participation?

In the meantime, the aging demographic in many Western and Asian Tiger economies means increasing demand for skilled labour from regions with younger populations. It also means larger markets for economies seeking to benefit from the growth of a rapidly expanding African middle class.

Many young people in Africa are taking charge of their futures. There is a rising tide of entrepreneurship sweeping across Africa spanning technology, IT, innovation, small and medium enterprises.

They are creating jobs for themselves and their communities.

We need to empower young people to sustain our planet, and let peace and prosperity thrive.

Q: Lastly, we heard strong commitments from President Uhuru Kenyatta on the issue of FGM- do you think it will really happen by 2022?

President Uhuru Kenyatta needs to be lauded for his strong commitment to ending FGM.

Despite being internationally recognized as a human rights violation, some 200 million girls and women alive today have undergone FGM, and if current rates persist, an estimated 68 million more will be cut between 2015 and 2030.

We cannot accept this any longer and should step up for this cause.

Without leaders as H.E Kenyatta championing the fight to address cultural harmful practices as FGM – rapid strides will never be made.