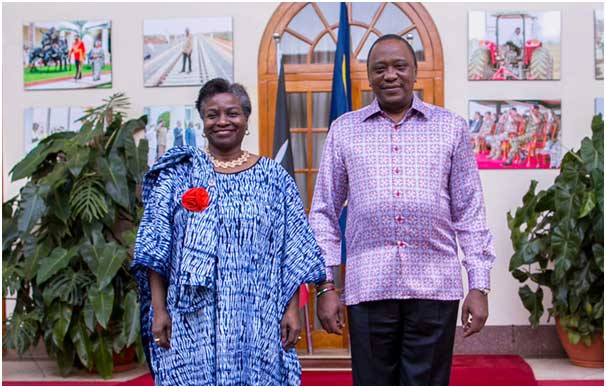 Kenyan President Uhuru Kenyatta hailed the strong partnership between his government and UNFPA during a meeting with UNFPA’s Executive Director, Dr. Natalia Kanem in March 2019, which will jointly convene the ICPD 25 from 12 to 14 November 2019 along with the Government of Denmark. Credit: PSCU

NAIROBI, Kenya, Nov 8 2019 (IPS) - As we count down the remaining days to the opening of the Nairobi Summit or the International Conference for Population and Development(ICPD), I am confounded by how much humanity has managed to simultaneously empower more women than at any other time in history, while at the same time failing to see that ‘women’s issues’ are actually ‘everyone’s issues’.

That countdown evokes memories of my own grandmother, who followed a common trend in India at the time, dropping out of school to get married and give birth to her first child at age 11. In many parts of the world, girls have over the years faced unthinkable obstacles while trying just to get an education, often jeopardizing their personal safety and risking being ostracized by their families and communities.

It wasn’t until a mere 25 years ago at the ICPD in Cairo that the world agreed that population and economic development issues must go hand in hand, and that women must be at the heart of our efforts for development.

Back then, governments, donors, civil society, and other partners made commitments to reduce infant and child mortality, reduce maternal mortality, ensure universal education, and increase access to sexual and reproductive health and rights, amongst many others. These commitments were a massive step forward for the rights of women and girls.

At the Conference in Nairobi, we all have an opportunity to repeat the message that women’s empowerment will move at snail-pace unless we bolster reproductive health and rights across the world. This is no longer a fleeting concern, but a 21st century socio-economic reality.

We can choose to take a range of actions, such as empowering women and girls by providing access to good health, education and job training. Or we can choose paths such as domestic abuse, female genital mutilation and child marriages, which, according to a 2016 Africa Human Development Report by UNDP, costs sub-Saharan Africa $95 billion per year on average due to gender inequality and lack of women’s empowerment.

Fortunately, the world has made real progress in the fight to take the right path. There is no lack of women trailblazers in all aspects of human endeavour. It has taken courage to make those choices, with current milestones being the result of decades of often frustrating work by unheralded people, politics and agencies.

Leaders like the indefatigable Dr. Natalia Kanem the Executive Director of UNFPA and her predecessors, supported especially by the Nordic countries, are pushing the global change of paradigm to ensure we demolish the silo of “women’s issues” and begin to see the linkages between reproductive rights and human prosperity.

Numerous studies have shown the multi-generation impact of the formative years of women. A woman’s reproductive years directly overlap with her time in school and the workforce, she must be able to prevent unintended pregnancy in order to complete her education, maintain employment, and achieve economic security.

Denial of reproductive health information and services places a women at risk of an unintended pregnancy, which in turn is one of the most likely routes for upending the financial security of a woman and her family.

A lot has been achieved since the years of my grandmother, when girls were expected to be demure and remain in the background. In many places the current teenage girl believes that every door is open to them; they can rise to any heights.

Yet in a lot of other countries, girls are up against a system that seems rigged against them for the long-term. These are countries where greater leadership and the right policies are sorely missing; where women and girls are robbed of the education they deserve and the jobs they need to lift themselves and their families out of poverty; where they are victims of sexual and physical abuse in their own homes or sold into child marriage.

As the UN Resident Coordinator to Kenya, I am privileged to serve in a country, which is hosting this very important conference. It has shown leadership to advance the cause of women’s right-from criminalizing female genital mutilation to stepping up the fight to end child marriage and pushing hard on improving reproductive, maternal and child health.

When the ICPD opens in Nairobi on 12 November 2019, I wonder how my grandmother’s life might have been different if she had been able to learn how to read and write and achieve her full human potential, but also appealing to all Governments to work towards giving half the world population the final and absolute control over their own bodies.

Siddharth Chatterjee is the United Nations resident coordinator to Kenya.