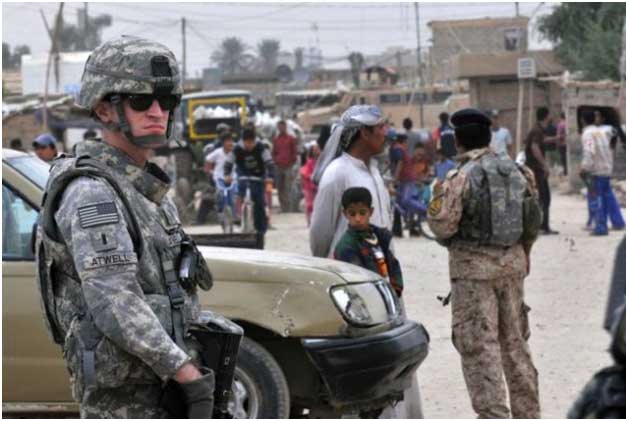 UNITED NATIONS, Jan 15 2020 (IPS) - Pat Buchanan, a senior advisor to three US Presidents and twice candidate for the Republican presidential nomination, once infamously described the United States Congress as “Israeli-occupied territory” -– apparently because of its unrelentingly blind support for the Jewish state.

And now, with Iraq threatening to “kick out” the US military and the Trump administration refusing to leave the country, is Iraq turning out to be “US occupied territory”?

Last week the Iraqi parliament demanded, in a vote mostly by Shia legislators, that US troops numbering over 5,200 leave Iraq.

But the Trump administration has refused to concede to the demand prompting Iraq to accuse the US of violating sovereign territory and perhaps the UN charter.

Stephen Zunes, Professor of Politics and International Studies at the University of San Francisco who has written extensively on Middle East politics, told IPS: “This is a clear violation of Iraqi sovereignty”.

Having foreign forces within a country’s international border against the wishes of the host government and without a treaty commitment allowing them to be there is in effect a foreign military occupation and would give the Iraqis the legal right to use military force against them, said Zunes who serves as coordinator of the program in Middle Eastern Studies.

Currently, the US has several military bases in Iraq, most of them described as Forwarding Operating Bases (FOB) going back to 2003.

Perhaps most vital is the Green Zone a 10-square-kilometer (3.9 sq mi) area in central Baghdad, that was the governmental center of the Coalition Provisional Authority during the occupation of Iraq after the American-led 2003 invasion and now remains the center of the US and international presence in the city.

When the Iranians retaliated against the drone-killing of Major General Qassim Suleimani, the commander of Iran’s Quds Force, they hit the US military base Ayn Al Asad in western Iraq with a barrage of missiles last week.

That base hosts the largest number of US troops in Iraq.

And Iraq accused both the US and Iran of violating its national sovereignty with dual military attacks on Iraqi territory.

Since the US invasion of Iraq by the Bush administration in 2003, there have been more than 200,000 civilians who have been killed or injured—an invasion described as Washington’s greatest foreign policy disaster since Vietnam.

Meanwhile, the Trump administration has threatened to impose sanctions on Iraq if it continues to demand US withdrawal from the country.

“If they do ask us to leave, and if we don’t do it on a friendly basis” President Trump was quoted as saying, “we will charge them sanctions, like they’ve never seen before ever. It will make Iranian sanctions look somewhat tame.”

The US also argues that its military presence in Iraq is to help Iraqis fight ISIS designated a “terrorist group” by the US State Department.

Norman Solomon, founder and executive director of the Washington-based Institute for Public Accuracy (IPA), a consortium of policy researchers and analysts, told IPS “history shows that respect for Iraqi sovereignty has never figured into the U.S. government’s calculations.”

“Rhetoric has sometimes sounded nice, but the actual policy has revolved around the precept of “might makes right“

What’s happening now is consistent with that policy, sometimes more gracefully implemented with liberal verbiage from the White House, he pointed out.

The latest dynamics involve an approach to geopolitics that reflects a belief in Washington that the United States has the right to work its will on the world as much as feasible, said Solomon, IPA’s coordinator of its ExposeFacts program.

Zunes said Trump’s refusal to consider a withdrawal is not surprising, however.

Republicans, along with some leading Democrats and prominent media pundits, insisted that President Obama should have kept U.S. troops in Iraq beyond the 2011 deadline by which President Bush and the Iraqi government had agreed to complete the withdrawal.

This would have also been illegal. Obama was roundly criticized for his insistence on living up to the agreement and international law.

“It will be interesting to see how Congress and the media react to Trump’s defiance”, said Zunes, who is also senior policy analyst for the Foreign Policy in Focus project of the Institute for Policy Studies .

Asked if there was a possible intervention by the UN, Solomon said what the United Nations can do about such matters is contingent on the extent to which the UN can extricate itself from U.S. veto power and intimidation of governments with political, military and economic blackmail.

“There is little that’s coherent about U.S. policies beyond flagrant self-interest for its extreme arrogance and military-industrial complex”, said Solomon, author of “War Made Easy: How Presidents and Pundits Keep Spinning Us to Death”

Asked about the issue of sovereignty and violation of the UN charter, UN spokesperson Stephane Dujarric told reporters January 13: “ The status… as far as I understand, the status of US forces in Iraq is under a Status of Forces Agreement, which is negotiated bilaterally between Iraq and the United States, and those discussions should take place between the United States and Iraq.”

The term “occupied territory,” which appears in the Fourth Geneva Convention, originated as a result of the Nazi occupation of Europe. Though it has become common parlance to describe the West Bank and Gaza as “occupied territories,” there is no legal basis for using this term in connection to the Arab-Israeli conflict.

Professor Julius Stone, a leading authority on the Law of Nations, categorically rejected the use of the term “occupied territory” to describe the territories controlled by Israel on the following counts:

(1) Article 49 relates to the invasion of sovereign states and is inapplicable because the West Bank did not and does not belong to any other state.

(2) The drafting history of Article 49 [Protection of Civilian Persons in Time of War] – that is, preventing “genocidal objectives” must be taken into account. Those conditions do not exist in Israel’s case.

(3) Settlement of Jews in the West Bank is voluntary and does not displace local inhabitants. Moreover, Stone asserted: that “no serious dilution (much less extinction) of native populations” [exists]; rather “a dramatic improvement in the economic situation of the [local Palestinian] inhabitants since 1967 [has occurred].”

Use of the term “occupied territory” in the case of the West Bank and Gaza is an abuse and misrepresentation of its true meaning.