How Many Immigrants in the Future? 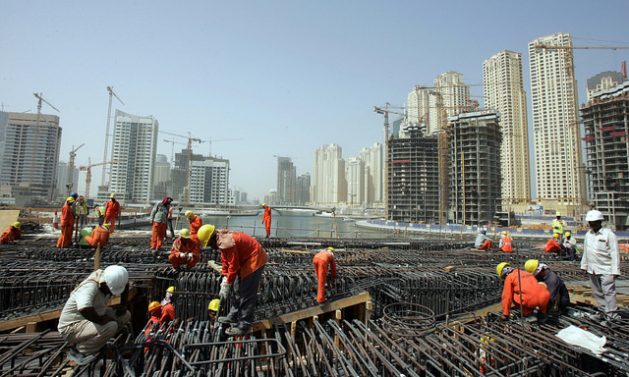 NEW YORK, Mar 9 2020 (IPS) - The answer to the critical question of how many immigrants will there be in the future is:  far below the number of people wanting to immigrate and far above the number of immigrants wanted. The discrepancy between the two opposing migration “wants” underlies the current divisive migration crisis sweeping the globe.

Surveys report that 15 percent of the world’s population, more than one billion people, would migrate to another country if they could. Moreover, the proportions wanting to move to another country are considerably higher in some developing regions, such as sub-Saharan Africa (33 percent), Latin America (27 percent) and Middle East and North Africa (24 percent).

Some countries in developed regions also have relatively high proportions wanting to immigrate, such as Russia (20 percent). 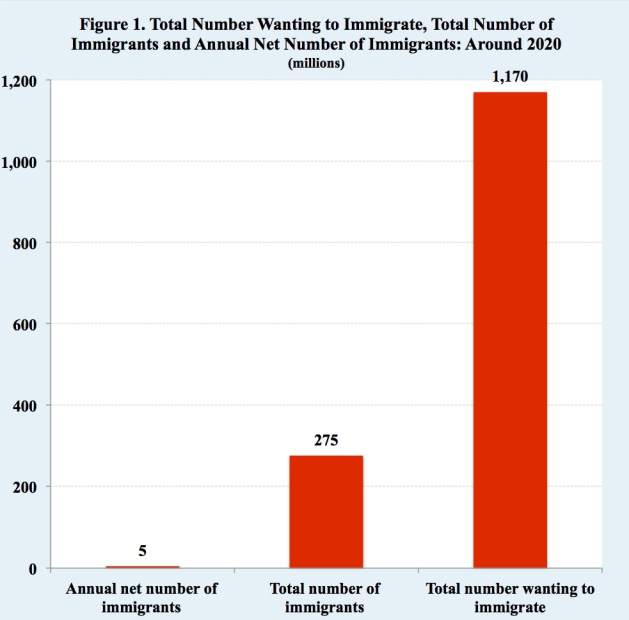 Source: Based on United Nations Population Division and Gallup.

In addition, right-wing and populist parties and nationalist groups in virtually every region of the world are putting increasing pressure on governments to oppose and resist accepting immigrants, especially those coming from very different cultures. Those parties and groups are also urging authorities to deport those migrants residing unlawfully in the country.

More than one billion people would migrate to another country if they could. The proportions wanting to move to another country are considerably higher in some developing regions, such as sub-Saharan Africa (33 percent), Latin America (27 percent) and Middle East and North Africa (24 percent)

Opinion polls in various migrant-receiving countries show that immigration is a top concern of voters with most having little appetite for more migration, especially illegal immigration. In the European Union, majorities in Greece (82%), Hungary (72%), Italy (71%) and Germany (58%) believe that fewer immigrants or no immigrants should be allowed to move into their countries. Majorities with similar views are also found in Israel (73%), Russia (67%), South Africa (65%) and Argentina (61%).

Most recently, Greece, Bulgaria and other members of the European Union are alarmed that Turkey, which hosts the largest number of refugees, close to 4.1 million, is not restraining hundreds of thousands asylum seekers in its territory from reaching Europe.

In addition to many EU member countries, many other countries have policies to restrict refugee and asylum access, including Australia, Bangladesh, Canada, India, Israel, Saudi Arabia, South Africa, United Kingdom and the United States.

The number of refugees worldwide in 2019 has more than doubled in the past decade, reaching approximately 26 million. In addition, UNHCR estimates that there are more than 3 million asylum seekers, 4 million stateless people and 41 million internally displaced persons.

While allowing countries to retain control over their borders, international laws, treaties and conventions also aim to protect and assist refugees and asylum seekers. However, the definitions of a refugee and legitimate asylum seeker are open to political interpretation, resulting in ongoing struggles in country capitals over who is covered and who is not.

In addition to those fleeing persecution, growing numbers of people are becoming refugees due to human rights violations and armed conflict. Humanitarian emergencies, widespread poverty and climate change are producing desperate people who have slim chances of migrating to another country other than arriving at its borders seeking asylum.

Also recently, a landmark ruling by the United Nations human rights committee found that it is unlawful for governments to return people to countries where their lives might be threatened by a climate crisis. Under such a judgment, tens of millions of people could be displaced and become refugees in the near future due to life-threatening climate and environmental changes.

However, the definition of climate refugee remains an open issue for governments and international organizations.

Anticipating the future flows of international migration is a challenging undertaking that is affected by economic, political, social and environmental factors in sending, transiting and receiving countries.

Nevertheless, population projections with explicit assumptions on the expected net number of migrants in the future are useful as they provide insight about the effects of future migration on a population’s size, age structure and composition.

The United Nations population projections, for example, provide two scenarios, the medium and zero migration variants, for the future net number of immigrants for all countries and regions. In brief, the future net numbers of immigrants in the medium variant are assumed to remain unchanged at approximately current levels throughout the remainder of the 21st century (Figure 2). 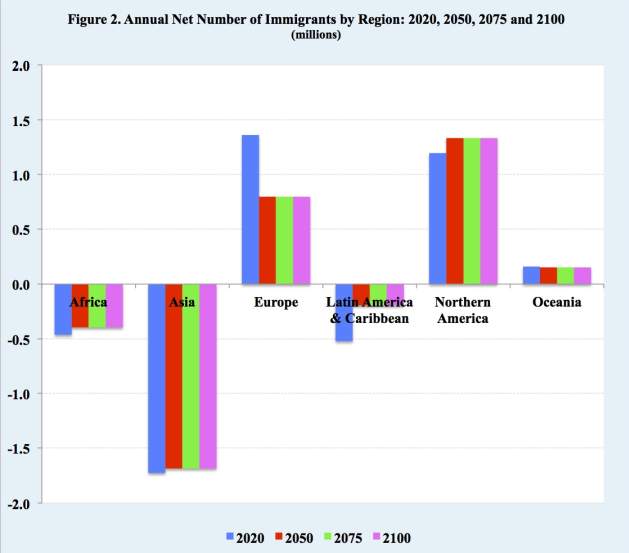 For analysts perhaps the safest answer politically is to assume immigration levels in the future will remain about the same as today, which seems to be the practice in most population projections. In the United States, for example, the main case scenario in the Census Bureau’s population projections to 2060 assumes net immigration levels will continue at slightly more than one million per year.

The politically safest answer, however, does not seem the most likely. Given a world approaching 8 billion inhabitants with unbalanced wealth and resources and unbalanced demographic trends compounded by climate change, it appears most likely that migration levels will be substantially higher in the coming decades.

It is therefore understandable that huge numbers of people in developing regions want to move to another country, typically a wealthy more developed country.

If the future is indeed more immigrants, refugees and asylum seekers, what will be the responses of migrant-receiving countries? Their current policies are basically to build walls and fences, tighten borders, institute travel bans, limit refugees, restrict asylum seekers and deport migrants unlawfully resident. Given today’s record-breaking numbers of immigrants, refugees, asylum seekers and others on the move, those policies do not seem to be achieving their intended goals.

They contend that if they do not stop the immigrant invasion and gain control over their borders, they will be overwhelmed and loose their culture and way of life as has happened in the past and is happening today in a number of countries.

Others have concluded that it is inevitable that there will be more immigrants, refugees and asylum seekers in the future. Rather than deny this likely trend, they recommend that countries make appropriate plans to deal with the expected migration increases.

While the number of immigrants in the future is a matter of heated debate, nearly all agree:  people on the move – be they immigrants, refugees or asylum seekers – will remain a controversial and divisive political issue for the foreseeable future.