Stella Paul is the recipient of the IWMF Courage in Journalism Award, a multiple winner of the Asian Environmental Journalism Awards, the Lead Ambassador for World Pulse and a senior IPS correspondent. 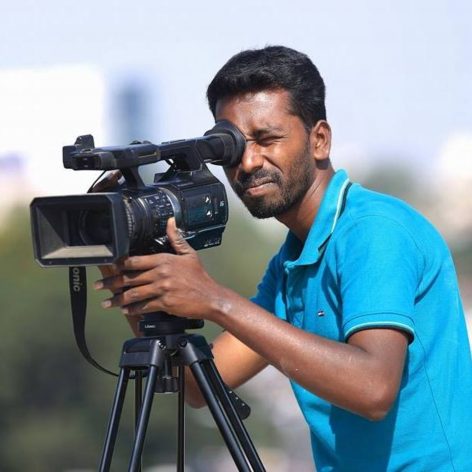 Jerald Aruldas, a journalist from the southern state of Tamil Nadu, and his colleague, were held by city police for 9 hours for reporting on stories around alleged government corruption around the food aid distribution system and how doctors in Coimbatore faced food shortages while working during the COVID-19 lockdown. Courtesy: Jerald Aruldas

HYDERABAD, India , May 1 2020 (IPS) - Andrew Sam Raja Pandian, a digital journalist and founder of a news portal in the southern state of Tamil Nadu, was arrested for running two news articles related to COVID-19.

One of the articles exposed corruption in the government food aid distribution system, while the other highlighted doctors in Coimbatore city facing food issues. The city police first detained the journalist and photographer who had reported on the stories, Jerald Aruldas and M Balaji, for 9 hours before arresting Pandian for publishing the pieces.

Yesterday morning, Apr. 30, Aruldas told me about how his detainment and the arrest of his editor have shaken him: “The police did not hurt me or Balaji. We were not interrogated, just made to sit there for long hours. But it was still a very intimidating experience. There is an air of fear in the local media. Every media person is now scared of covering news related to COVID-19.”

The worries are not unjustified: Pandian, released on bail on Apr. 28, has been charged under several sections of criminal laws as well as the The Disaster Management Act, 2005. He faces several years in jail if proven guilty.

The arrest of Pandian and detention of Aruldas and Balaji are not isolated cases. Across India, media personnel have been facing violence, including intimidation, detention and arrests.

Zubair Ahmad, a senior freelance journalist based in India’s Andamans and Nicobor Islands, was arrested on Apr. 27 for sending a tweet that questioned the alleged quarantining of locals for speaking to COVID-19 patients over the phone.

Can someone explain why families are placed under home quarantine for speaking over phone with Covid patients? @MediaRN_ANI @Andaman_Admin

Ahmad’s tweet was based on an article published by a local newspaper where a woman claimed she was put under quarantine following a phone call to a relative who tested positive for the coronavirus.

The same day, Ahmad was arrested by police for “posting inciting, false and instigating tweet to disrupt public harmony, violating government order and to create panic among the public”.

Currently out on conditional bail, Ahmad has also been charged for several offences under the The Disaster Management Act, 2005.

“I am safe, at home and under conditional bail,” he told me when I called him. But he sounded tired and particularly disturbed by the fact that the police have been carrying out a smear campaign against him.

For example, the police chief of Andamans and Nicobar Deependra Pathak called Ahmad a “self-proclaimed journalist” in his address to the media after his arrest.

“I have written for India Today, EPW  (Economic and Political Weekly – a well-known media publication), Down to Earth, IE (Indian Express), TOI (Times of India) etc. Now, they are trying to discredit me by calling me a self proclaimed and self styled journalist,” he told me.

The anguish is easy to understand and also relatable. It takes years for a journalist to build a career and reputation and earn the trust of readers/viewers.

Questioning the credibility is an attempt to end the reader’s trust or destroy the very foundation of a journalist’s reputation. 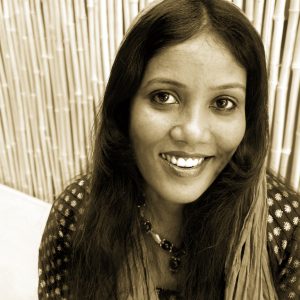 This is not something happening only in India. Like the pandemic itself, assaults against working journalists and media outlets, especially those often criticising government policies and actions, have been on the rise worldwide.

One of the biggest such actions took place in Myanmar on Apr. 1 when the government ordered blockade of 230 local websites using local IP addresses.

Many of them were news portals like the Rakhine-based Narinjara News – a known critic of Myanmar army’s action against the minority Rohingyas. Other news sites that were blocked included the Development Media Group (DMG), Mandalay-based Mandalay In-Depth News, Voice of Myanmar and Tachileik-based Mekong News. All of which are officially registered with the Ministry of Information, which gives them permission to publish locally.

A number of organisations have appealed to the government to lift the ban, and my friend Ni Ni Aye, a political and internet access activist, says that there may have been a partial lifting of NGO-owned websites. But there is no clear picture yet.

As a journalist who has covered the Rohingya issues both within and outside of Myanmar, I can both understand and relate to the difficulties the media personnel associated with these websites. When your portal is blocked, your connections are blocked and you are cut off from the rest of the world, including your audience, which is your main support system.

The result of this could not only mean financial difficulties but also a very dangerous level of isolation, which makes you completely vulnerable.

In the winter of 2018, I visited Myanmar and connected to a public internet network. Immediately, all of my devices stopped working. They started working again the moment I left Myanmar airspace – no repairs or virus cleaning needed.

But during those six days when I could not send or receive a single message to anyone anywhere, I spent each moment in anxiety, fearing a knock on my door at any minute. The worst of all fears is to vanish without anyone in my family or any of my friends knowing about it.

Personal fears aside, the intimidation and suppression of media is also a big loss for the people who can no longer access the news they want. And when there is a pandemic with no available cure, lack of information is a threat to public safety. On Mar. 31, in a last editorial before it was blocked, the DMG wrote this: “the deprivation of the internet as a means of receiving information is especially problematic at a time when timely communication of coronavirus preventive measures could literally be life-saving”.

Rakhine state, for example, is now a black spot as hyperlocal news is no longer accessible. 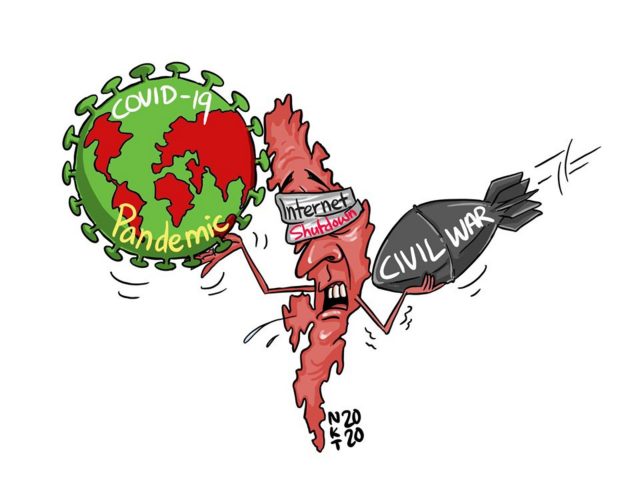 Nyi Khine Thwee, an artist in Myanmar, has long been drawing cartoons to show the human rights violations and the plight of people in Rakhine state. But since the COVID-19 pandemic, he has been using his art to express the current situation of media and freedom of speech in the country. Courtesy: Nyi Khine Thwee

Nyi Khine Thwee – an artist I know – has been describing the human rights violations and the plight of people in Rakhine through illustrations for a while. Thwee has now taken up drawing cartoons to express the current situation of media and freedom of speech in the country.

Thwee’s work seems to be a perfect response to an ongoing United Nations Educational, Scientific and Cultural Organisation (UNESCO) campaign called Cartoons for Freedom of Expression, launched to commemorate the Press Freedom Day on May 3.  The campaign has been publishing series of cartoons that show the state of press freedom during the ongoing COVID-19 crisis.

Meanwhile, there is a bombardment of misinformation related to COVID-19 on social media. In India, the fake news first began to appear in February and I remember receiving Whatsapp texts that said chopping onions would kill the disease. Then, as the virus spread further, the volume of misinformation also increased.

Some news outlets did play a part in this by sharing news of cow urine being a possible cure for COVID-19. Yet there was no official body or strategy to counter the fake news until Mar. 31 when the Supreme Court of India, instructed the government to share daily updates on the coronavirus.

However, despite the government efforts, fake news and false information, especially laced with communal hatred have continued, especially on social media platforms.

I just noticed one such post on Twitter which calls upon Hindus to celebrate because a Muslim parliamentarian from Hyderabad died because of COVID-19. I can only imagine the kind of responses and public anger such a hateful and fake news post will result in when it goes viral.

I read a brief just released by UNESCO about the role of free and independent media in countering COVID-19.

Titled ‘Journalism, press freedom and COVID-19’, the brief quotes Director-General Audrey Azoulay as saying: “At this crucial moment and for our future, we need a free press, and journalists need to be able to count on all of us.”

I think the UNESCO brief hits the nail hard: if we are to win this battle against the pandemic, we need the right information and this cannot be accessed only by wielding the baton, but also by freeing and strengthening the pen of journalists.