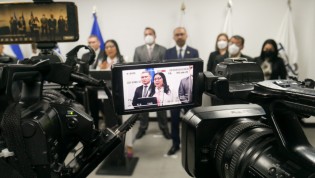 By Naureen Hossain
Governments are determined to control information and are prepared to imprison journalists to achieve this mission, the Committee to Protect Journalists (CPJ) said following the release of their annual global census tracking journalists who were imprisoned and killed in 2021.

By Namrata Sharma
This year’s World Press Freedom Day on 3 May falls during COVID-19 lockdowns in many of our countries. Restriction on movement means journalists all over the world are facing obstacles in getting interviews and data, and verifying stories before publishing.

By Stella Paul
Andrew Sam Raja Pandian, a digital journalist and founder of a news portal in the southern state of Tamil Nadu, was arrested for running two news articles related to COVID-19.

By Josef Benedict
May 3rd marks World Press Freedom Day around the world. During this COVID-19 pandemic, a robust media environment is critical: access to life-saving information is key in the fight against the virus. As governments impose a range of restrictions in attempts to curb the pandemic, journalists help hold authorities to account by providing analysis, engaging in debate about government actions, and creating a space for dialogue about the future we all hope to see.
Next Page »
ADVERTISEMENT ADVERTISEMENT