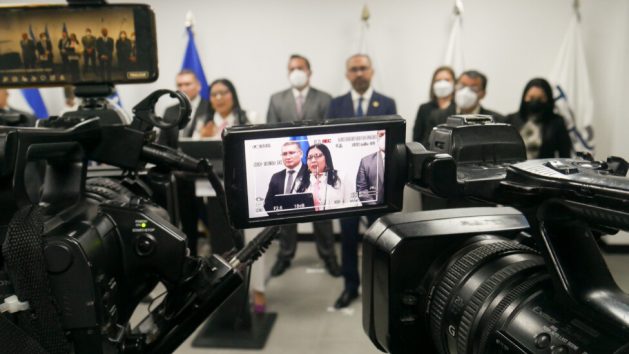 Reporters and photojournalists cover an Aug. 11 press conference at the Supreme Electoral Tribunal in San Salvador. Independent media outlets in El Salvador, Guatemala and Nicaragua suffer constant persecution and harassment by state entities and government officials in an attempt to silence them and discredit investigations into corruption and mismanagement of public funds. CREDIT: Edgardo Ayala/IPS

SAN SALVADOR, Aug 15 2022 (IPS) - Practicing journalism in Guatemala, Nicaragua and El Salvador is becoming increasingly difficult in the face of the persecution of independent media outlets by neo-populist rulers of different stripes, intolerant of criticism.

The most recent high-profile case was the Jul. 29 arrest of José Rubén Zamora, founder and director of elPeriódico, one of the Guatemalan media outlets that has been most critical of the government of right-wing President Alejandro Giammattei, who has been in office since January 2020.

The union of Guatemalan journalists and the reporter’s family say the arrest is a clear example of political persecution as a result of the investigations into corruption and mismanagement in the Giammattei administration published by the newspaper, which was founded in 1996.

"The last bastions of the independent press (in Nicaragua) are under siege and the vast majority of independent journalists, threatened by abusive legal actions, have had to flee the country" -- Reporters Without Borders

“I definitely believe it is a case of political persecution and harassment, and of violence against free expression and the expression of thought,” Ramón Zamora, son of the editor of elPeriódico who has been imprisoned since his arrest, told IPS from Guatemala City.

A case out of the blue

The 66-year-old journalist is one of the most recognized in Guatemala and in the Central American region, and has been awarded several times for elPeriódico’s investigative reporting.

Zamora is being charged with money laundering, influence peddling and racketeering, although the evidence shown at the initial hearing by prosecutors “are poor quality voice messages that show nothing,” according to Ramón.

The preliminary hearing ended on Aug. 9 with the judge’s decision to continue with the case and keep Zamora in pre-trial detention. Prosecutors now have three months to present more robust evidence before taking him to trial, while the defense will seek to gather evidence in order to secure his release.

“We are going to clearly demonstrate as many times as necessary that this case was staged, that the evidence, or rather the evidence they have, cannot be stretched as far as they are stretching it,” said Ramón, 32, an anthropologist by profession.

He added that from the beginning President Giammattei showed signs of intolerance towards criticism of his administration.

“We knew he was an angry person, authoritarian in the way he acted, but we never thought he would go this far,” he said.

Since the arrest, Ramón said that his father is in good spirits, upbeat, although he has had problems sleeping, while the newspaper continues to be published in the midst of serious difficulties due to the temporary seizure of its bank accounts and liquidity problems to pay the staff and other costs.

On Friday Aug. 12, elPeriódico gave key coverage to a decree approved by the Guatemalan legislature that gives life to a Cybercrime Law, which could become another governmental tool to silence critics.

The newspaper quoted the organization Acción Ciudadana, according to which article 9 of this law “contravenes free access to sources of information – a right stipulated in the constitution; furthermore, it violates the Law of Broadcasting of Thought, restricting freedom of information.”

Zamora Jr. regretted that in Central America journalistic work is restricted and persecuted by governments and other de facto powers, as is happening in Guatemala with Giammattei, in El Salvador with the government of Nayib Bukele, and in Nicaragua, with that of Daniel Ortega.

“Ortega, in Nicaragua, is a mirror that we all have in front of us in the region, it is worrisome,” he said. 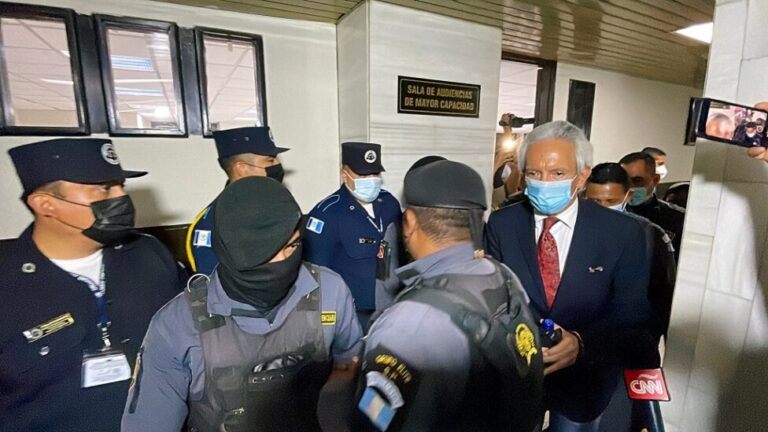 Journalist José Rubén Zamora, editor of elPériódico, one of the newspapers most critical of the government of Guatemalan President Alejandro Giammattei, leaves the courtroom on Aug. 9 after a judge ordered pretrial detention, on accusations of money laundering. But his family, the journalists’ union and civil society organizations maintain that the case is part of political persecution promoted by the government. CREDIT: Courtesy of elPériódico

In these three countries there is an openly hostile policy against the independent media, whose journalists suffer harassment, persecution, blackmail, intimidation and restrictions of all kinds in the line of duty.

Central America, a region of 38 million people, faces serious economic and social challenges after leaving behind decades of political strife and civil wars in the 1970s and 1980s, specifically in Nicaragua, Guatemala and El Salvador.

Further progress towards democracy is undermined by attacks on or harassment of media outlets that criticize corrupt governments, according to reports by national and international organizations.

In this regard, the World Press Freedom Index 2022 report by Reporters Without Borders (RSF) points out the decline suffered by Nicaragua, which dropped 39 positions in the ranking to 160th place out of 180, and El Salvador, which lost 30 positions, dropping to 112th place.

“For the second year in a row El Salvador had one of the steepest falls in Latin America,” the report states.

And it adds that since he took office in 2019, Bukele, described as a “millennial” leader with a vague ideology and an “authoritarian tendency…is exerting particularly strong pressure on journalists and is using the extremely dangerous tactic of portraying the media as the enemy of the people.”

According to the Association of Journalists of El Salvador (Apes), from January to July 2022, 51 incidents have been reported against the press, related to digital attacks and obstruction of journalistic work by state institutions, officials and even supporters of the ruling party.

Bukele himself, in press conferences, often accuses the media and even specific journalists, who he names, of being part of an opposition plan to discredit the work of the government.

A number of reporters have left the country to avoid problems.

Of those who have left the country, at least three have done so almost obligatorily because government agencies or officials have pressured them to reveal their sources of information, Apes Freedom of Expression Rapporteur Serafín Valencia told IPS.

“Bukele decided to undertake a wave of attacks against the press, although not against the entire press, but against those media outlets and journalists who have a critical editorial line and try to do their work in an independent fashion,” said Valencia.

With regard to Ortega in Nicaragua, the RSF report states: “Nicaragua (160th) recorded the biggest drop in rankings (- 39 places) and entered the Index’s red zone.”

It adds: ” A farcical election in November 2021 that carried Daniel Ortega into a fourth consecutive term as president was accompanied by a ferocious crackdown on dissenting voices.

“The last bastions of the independent press came under fire, and the vast majority of independent journalists, threatened with abusive prosecution, were forced to leave the country,” says the report. 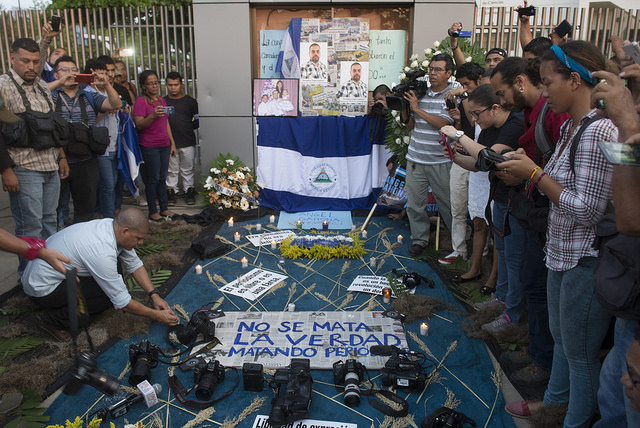 “You can’t kill the truth by killing journalists” reads a banner set out by press workers following the death of a colleague in Nicaragua, where the government of Daniel Ortega has shut down critical media outlets and forced many independent reporters into exile. CREDIT: Jader Flores/IPS

Guerrilla leader accused of being a dictator

One of the reporters who had to leave Nicaragua was Sergio Marín, who for more than 12 years hosted a radio program called La Mesa Redonda.

“There were very strong indications that my arrest was imminent,” Marín told IPS from San José, the capital of Costa Rica, the country he fled to on Jun. 21, 2021.

Marín said that the situation in Nicaragua was, and continues to be, untenable for independent media outlets and reporters since Ortega returned to power in January 2007, after a first stint as president between 1985 and 1990.

Ortega was a leader of the leftist guerrilla Sandinista National Liberation Front (FSLN) that in July 1979 overthrew the Somoza dynasty’s dictatorship, which directly or through puppet rulers had been in power since the 1930s.

But the FSLN’s progressive ideas of justice and freedom were soon buried by Ortega’s new power dynamics: he forged obscure pacts with the country’s political and economic elites to set himself up as Nicaragua’s strongman, with actions typical of a dictator.

“With Ortega’s return to power in 2007, he began a process of isolation of journalists who ask questions that question power,” said Marín, 60.

Then, according to Marín, the government threw up a “financial wall”: denying state advertising to media outlets that were critical, or even advertising from private businesses allied with the Ortega administration.

That is when the first media closures began to be seen, he said.

The situation worsened with the popular uprising against the government in April 2018, massive protests that were stopped with bullets by the police, military and pro-Ortega paramilitary forces.

Around 300 people died in the repression unleashed by Ortega, said Marín.

These events were a turning point for journalism because, in the face of the crackdown, the media in general, except for pro-government outlets, came together in a united front.

“So the regime identified us as a key enemy, which must be silenced,” Marin added.

Since then, the Ortega government has maneuvered to close down independent media outlets and critical news spaces, such as those directed by veteran journalist Carlos Fernando Chamorro, who is now also in exile in Costa Rica.

“Now, the newspaper El Nuevo Diario is closed, and La Prensa was taken over by the government and the entire editorial staff is in exile, and in total there are more than 70 journalists who have left the country,” he added.

In the first week of August Ortega stepped up harassment against dissenting voices, and began targeting Catholic priests. Since Aug. 4 police forces have been holding Bishop Rolando Alvarez, of the Diocese of Matagalpa, in the north of the country, in the Episcopal Palace.