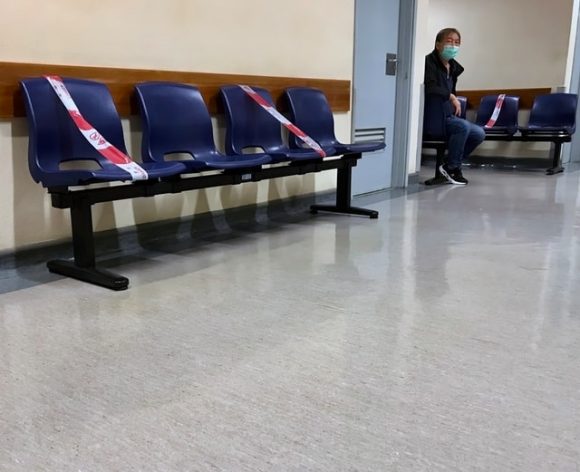 Social distancing in a Macau Hospital waiting room. Reporters Without Borders (RSF) said censorship of the Chinese media made the COVID-19 situation worse. Photo by Macau Photo Agency on Unsplash

BRATISLAVA, May 26 2021 (IPS) - China is one of the worst places in the world for media freedom, according to the global media watchdog Reporters Without Borders (RSF) which ranked the country 177 out of 180 in its latest World Press Freedom Index. In the report, the group warned that Beijing is taking “internet censorship,  surveillance and propaganda to unprecedented level,” and had “taken advantage of the Covid-19 pandemic to enhance its control over online information even more”. China is also the world’s biggest jailers of journalists with more than 120 journalists and what the group calls “defenders of press freedom” currently detained.

IPS spoke to Cedric Alviani, East Asia Bureau Head at RSF, about what effect China’s media restrictions had in the early days of the country’s Covid-19 outbreak over a year ago, how foreign journalists are facing unprecedented pressures in the country, and what Beijing is doing to try and create a New World Media Order to spread its propaganda around the globe.

Cedric Alviani (CA): What we are saying is that had there been a freer press in China, information about the first infections would have been made public much sooner, and authorities in China, and elsewhere, may have been able to better control the spread. The pandemic may not have been so severe. But we are not in any way blaming China for the pandemic as there are so many other factors involved in any pandemic.

However, censorship made the situation worse. Viruses do not recognise borders, nor censorship. Compare what happened in China with regard to open reporting on the virus, and Taiwan, where the authorities were very open right from the start with information about Covid and disseminating it to the public. That way the public were fully informed and could make decisions to protect themselves.

We still do not have the information to fully see the current situation with Covid in China because of censorship. Have there been any outbreaks? Would we know, be told about them? We cannot have a clear picture.

What this pandemic has shown is the very reason we need a free press and independent journalism so that the facts and full information can be got out. This is not just in the case of a pandemic, but in any situation in which getting full information out to people can help save lives.

In a world where media is completely controlled by the state, can you imagine how many epidemics there would be? You cannot censor, or hide, a virus. They could spread overnight. There would be no full information, doctors would be afraid to speak.

IPS: In RSF’s latest press freedom index, China is ranked the fourth worst country in the world for media freedom and the report accompanying the index said that China continues to take internet censorship, surveillance, and propaganda to “unprecedented levels”. What kind of media restrictions do Chinese journalists face and what happens to journalists who defy those restrictions and report freely, or critically of the government?

CA: China is the world’s worst enemy of free press. Our fear is that in 20 years there will be no journalism, only state propaganda. The censorship authorities in the country are providing lists to media of what they can and cannot talk about. The lists are getting longer all the time.

IPS: Is this the same in Hong Kong, where there have been increasing curbs on general freedoms in the last few years?

CA: In Hong Kong, the Chinese government has entered ownership of most Chinese language media and through economic pressure has also managed to deprive other media of funds. The situation is getting worse with direct attacks being used to impose Beijing’s media rules and censorship on local media.

IPS: Last year, at the start of the Covid-19 pandemic, news about the situation in China leaked out to the rest of the world through many so-called ‘citizen-journalists’. Some of these people later reportedly disappeared or there were claims they had been forced into silence by the authorities and were living in fear of arrest, or worse. Has the regime essentially shutdown any and all citizen journalism now, and what does this mean for freedom of information in the country?

IPS: What is the situation like for foreign journalists in China?

CA: Unlike local journalists, their families can’t be threatened so they can do freer reporting than domestic journalists. But now they are coming under pressure from the regime. A lot are moving to Taiwan, which is a safe haven for journalists, but it makes it more difficult to report on mainland China and get an accurate picture of events there. The world needs foreign correspondents in mainland China so we know what is happening there.

In the last year, the Chinese government has expelled 18 foreign correspondents. So many being expelled is unheard of here. Foreign journalists are starting to worry they may be taken hostage in political disputes between China and other countries. They have also complained of pressure being put on their sources, so they are left with no one to speak to for their stories as those sources are too scared to speak on record or too scared to speak at all.

IPS: Can you see a time in the future where foreign journalists will not be able to work at all in China, or not without their work being censored or approved in some way by authorities in Beijing?

IPS: RSF has previously spoken about what it claims is China’s pursuit of a New World Media Order to expand its ideological influence beyond its borders, which poses a threat to free journalism and democracy. Could you explain what this New World Media Order is and how exactly China is pursuing it?

CA: The New World Media Order is simple to explain – China’s aim is to make journalism a synonym for propaganda. It wants to remove any counterforce or opposition to the regime in power. Investigative journalism is necessary for democracy and accountability, and what China wants is to have ‘journalists’ who are patriotic people who present propaganda. The regime is trying to change and control the narrative of itself and China. It is using international TV broadcasting, as well as buying up advertising space in international media and even working its way into foreign media, as part of its aim to create this new order.

IPS: Do you think the countries in which China is trying to infiltrate foreign media and gain influence are aware that this is what Beijing is doing?

CA: Everyone is aware of what China is doing with this New World Media Order and trying to infiltrate media, but they have closed their eyes to it because countries want to do trade with China. There has been this engagement and stated aims of trying to change and improve the human rights situation in China, but it has been shown that nothing has changed. What is going to happen is that citizens in these other countries, in democracies, are going to soon realise that their governments have been selling their countries’ souls for decades.

IPS: Beijing could argue that by setting up Chinese language TV stations and media outlets in other countries it is doing nothing different to what the BBC, CNN, or other similar foreign broadcasters do, or have done, in China. What would your counter argument be for that?

CA: There is a huge difference between public media, i.e. media which is essentially owned by the public, and state media. It is important for any public to have access to information which is independent, and which acts as a reference media for the public. For example, the BBC is a public media, it is now owned or run by the state authorities, it has its own board, and is responsible for its own decisions, and it is impossible for the government to make it publish or broadcast something which it does not want to. It is independent. But something like China’s CCTV has to promote the Chinese communist party’s propaganda. The two entities are entirely different in their nature and it is incorrect to even compare them in any way.

IPS: Are other regimes copying China’s example of gaining influence and peddling propaganda in foreign media to pursue their own ideological and political aims?

CA: China’s model of media turning into state propaganda is being exported all over the world. Dictators now know that if they can control the media, they can keep getting re-elected because there is only one message getting to the people – that they have a glorious leader.

IPS: What can, or should, countries which claim to support freedom of information and free media, such as many Western democracies, be doing to counter China’s pursuit of a New World Media Order?

What they have to do is to remain democracies and open and not arbitrarily get rid or ban any media. But they also have to have a system in place which protects free, independent media and makes sure competition is fair, and that any media operating on that market do so by adhering to free and open journalism and not to propaganda.

IPS: What are the prospects for media freedom in China in the medium and long-term future?

CA: As long as Xi Jinping is in power it is hard to see any positive change in the state of media freedom in China any time soon, and in fact it is more likely to just get worse. The only hope is that political forces eventually emerge within China which will open up the possibility of a freer media and give the Chinese people what they want, which is freedom of information. We saw how angry Chinese people were online when they realised that the authorities had lied to them over Covid-19. The government has powerful technological tools at their disposal and have been successful in stopping people accessing information, but the demand from the people for real and accurate information will win out in the end, even though that does not appear to be something likely to happen any time very soon.