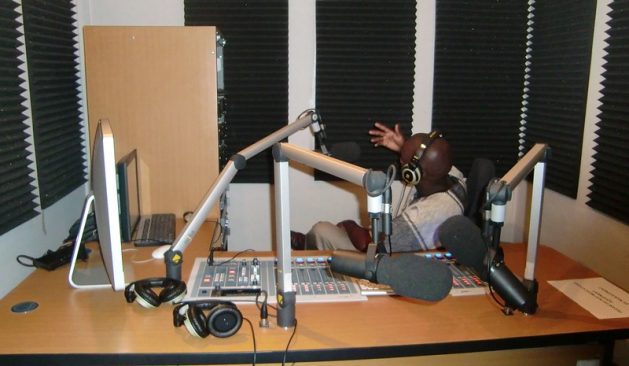 Working as a journalist in Zimbabwe has been particularly hazardous for investigative journalists in a country that makes regular appearances in global top rankings of corruption. Zimbabwe’s press freedom remains fragile. Credit: Jeffrey Moyo/IPS

BULAWAYO, Zimbabwe, Jan 19 2021 (IPS) - A long-running gag says “in Zimbabwe there is freedom of speech, but no freedom after the speech”. But for journalists and activists who have been forced to endure nights in the country’s overcrowded and filthy holding cells, this is no laughing matter as prison inmates have no personal protective equipment to guard against COVID-19.

And when government spokesperson Nick Mangwana warned ominously last year that, “No one is above the law,” it only confirmed what many here have always feared: that the ruling Zanu PF party will not hesitate to arbitrary apply the law to silence critics.

Mangwana’s comments had come after the arrest of journalist Hopewell Chin’ono, who was accused of using social media to foment public violence.

Chin’ono was back behind bars on Jan. 8 on charges of posting “fake news” on Twitter.

Soon after Chin’ono’s arrest, opposition Movement for Democratic Change – Alliance (MDC-A) spokesperson Fadzayi Mahere and Job Sikhala, an opposition legislator who also serves as a MDC-A vice chairperson, were also detained by the police for posting the same story Chin’ono had shared on social media.

The widely-shared story alleged that a police officer attempting to enforce COVID-19 restrictions had aimed his baton stick at a woman carrying a child, but fatally struck the child instead.

According to reports, the child died on the spot. Police, however, dismissed the story as fake news despite video footage of the mother wailing that the police officer had killed her child.

The arrests were immediately condemned by rights defenders with Amnesty International, which demanded their release.

“Zimbabwean authorities must immediately and unconditionally release and drop the malicious charges against them,” Mwananyanda said.

However, it is the arrest of Chin’ono – for the third time in six months – that has placed the spotlight back on Zimbabwe’s fragile press freedom, where critics say journalism has for years remained a dangerous occupation for a country not in a warzone.

It has been particularly hazardous for investigative journalists in a country that makes regular appearances in global top rankings of corruption.

“I was jailed after exposing corruption,” Chin’ono wrote last year after his first arrest, which came after the authorities criticised the media for allegedly reporting falsehoods about members of President Emmerson Mnangagwa’s family being involved in shady COVID-19 equipment procurement deals which prejudiced the country of millions of United States dollars.

Chin’ono’s exposé reportedly led to the firing of Zimbabwe’s health minister, yet it was to prove to be just the beginning of the investigative journalist’s brushes with the law for his work reporting corruption in high places.

“Media freedom campaigners have done a spirited job, but what they can achieve will always be severely limited in a repressive regime,” he told IPS.

According to Transparency International’s Corruption Perception Index of 2019, Zimbabwe ranked 158 out of 180 countries making it one of the most corrupt in the world.

“In Southern Africa, journalists and others working to expose corruption face an unacceptable level of risk,” Transparency International said in a statement last year.

The international press freedom watchdog Reporters Without Borders ranked Zimbabwe number 126 out of 180 countries in the 2020 World Press Freedom Index, making the southern African country one of the worst places to work as a journalist.

“It seems there are some within government who wish to undermine Zimbabwe’s re-engagement efforts through their reckless abuses that entrench the pariah state image,” Dewa told IPS.

The European Union in Zimbabwe also added its condemnation of the arrest of Chin’ono, Sikhala and Mahere, posting on Twitter on Jan. 13 that “the current pre-trial detentions, delays of proceeding without serious charges are questionable”, while the Dutch Embassy in Harare reminded the country’s minister of foreign affairs Sibusiso Moyo the commitments Zimbabwe made on Dec. 9 at the World Press Freedom Conference to increase the safety of journalists.

The crackdown continues almost six years after the disappearance of journalist and activist Itai Dzamara whose whereabouts remain unknown but is widely feared dead.

“We have a government that is driven by paranoia and doesn’t want to be held accountable,” Nqaba Matshazi, of the Media Institute for Southern African (MISA) – Zimbabwe chapter, told IPS.

While police say Chin’ono faces up to 20 years in prison, his lawyers are challenging the constitutionality of the charges and the journalist remains defiant in a country where media activists say journalists are shying away from probing investigative journalism for fear of arrests.

“The persecution of investigative and other journalists routinely face has several retrogressive effects, among them fear, self-censorship and capture. When you see a journalist being brought to court in leg irons for posting a Tweet, you naturally wonder whether if your next story is worth dying for,” said Majoni.

“Journalists are being arrested for doing their job and our real challenge is that the arrests show an increase in the monitoring of journalists’ social media activity,” Roselyn Hanzi, executive director of the Zimbabwe Lawyers for Human Rights, who are representing Chin’ono and other journalists and citizens arrested under questionable charges, told IPS.

“Despite constitutional provisions, what is required are administrative reforms to weed out bad apples in the system and also human rights training for institutions that have become very partisan,” Hanzi told IPS.

There are concerns however that there still are no critical voices emerging from regional bodies, which analysts say could be emboldening impunity and continued human rights violations in Zimbabwe.

“The silence and indifference of Zimbabwe’s neighbours like South Africa, SADC and the African Union has emboldened rogue elements with the Zimbabwe regime to go for broke,” Mavhinga told IPS.

“But tyranny has a witness and one day there will be justice and accountability for all the abuses,” Mavhinga said.