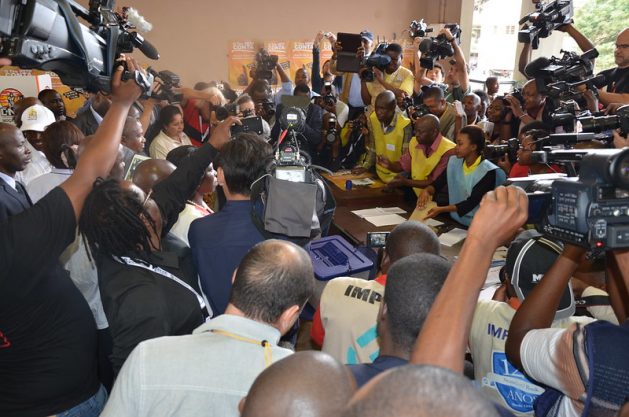 There is currently a grave pattern of detention or unsubstantiated allegations against journalists in Mozambique. Last month unknown attackers set on fire the office of a weekly newspaper Canal de Moçambique that had recently published investigations exposing corruption in the government. Courtesy: CC by 2.0/The Commonwealth

Angela Quintal, the Africa programme coordinator at the Committee to Protect Journalists (CPJ), told IPS that while they had never before witnessed an attack of this magnitude or nature, there is currently a grave pattern of detention or unsubstantiated allegations against journalists in the country. CPJ, a non-profit focused on press freedom, also monitors such attacks on the media around the world.

Quintal pointed some of the recent cases: arbitrary arrest and detention of radio journalist Amade Abubacar; the arrest of investigative journalist Estacio Valoi; the detention of Amnesty International researcher David Matsinhe, and driver, Girafe Saide Tufane, who were held for two days before being released without charge; and the repeated harassment of Canal’s executive editor Matias Guente.

Then there are the other cases, such as the enforced disappearance of Ibraimo Mbaruco, a community radio journalist and newscaster in Palma district in Cabo Delgado province.

On the same day as the arson attack, journalist Armando Nenane was arrested for not fully complying with regulations surrounding COVID-19, according to Quintal. Nenane published a story about how he managed to deposit funds in a former Defence Minister’s bank account in order to verify an exposé that Canal had published.

These arbitrary arrests are part of a pattern, says Matsinhe, the Mozambique researcher for Amnesty International. He told IPS that under the pandemic, there’s been an increase in harassment, intimidation, arbitrary arrests and detentions of journalists often under the guise of allegations that they were “violating COVID-19 regulations”.

The country’s increasingly deteriorating press freedom is also an attack on human rights, he said.

“People’s right to information depends on the journalists’ ability to do their work, which in turn depends on respect, protection, promotion and fulfilment of press freedom by the government,” Matsinhe said. But in taking that away, the government of Mozambique “relies on people’s ignorance, lack of information, to exercise its power and practice corruption unchecked.”

“Under the current economic, social and political conditions in Mozambique, access to information – which is only possible where press freedom is guaranteed – enables Mozambicans to participate in their country’s political life, to hold their government accountable, to exercise their civil and political rights,” he added.

While the lack of this right is worrisome, Quintal said the reaction by Canal’s staff members – by continuing to work and publish – shows they’re not bowing to this pressure. Staff had set up a makeshift office and published a front-page editorial vowing not to back down from their investigative journalism. “Obviously such an attack might have a chilling effect on the media and could well result in some self-censorship by journalists. However, it has been heartening to see how Canal de Moçambique and its online daily publication continued to publish,” she said.

“In terms of solidarity, the fact that a rival media group and its journalists rallied to assist and even offered their premises so that Canal journalists could produce that week’s edition of the newspaper, was also great to see,” Quintal added.

Still, a lot of work remains to be done.

“In my opinion [the government] has simply ignored the attempts to reach out and to engage,” Quintal said.

Matsinhe said the government can take some “concrete steps” to improve and ensure freedom of press in the country.

“The government must refrain from seeing the press as the state enemy and investigate the cases of injustices committed against various journalists and bring those found responsible to justice.”

Echoing similar demands, Quintal acknowledged the positive efforts by the Media Institute of South Africa-Mozambique, “to form a reference group with the government to review and consolidate the legal framework for cybersecurity and digital rights, and to ensure that it does not undermine access to information”.

The government must also conduct a review of legislation that is hostile towards press freedom, such as “overly broad” sections of the Penal Code that are often used to crack down on journalists.