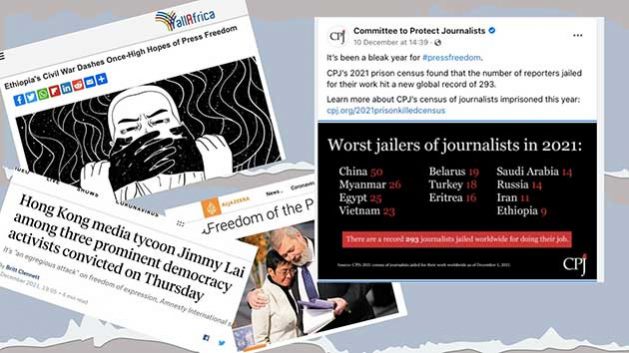 New York, Dec 13 2021 (IPS) - Governments are determined to control information and are prepared to imprison journalists to achieve this mission, the Committee to Protect Journalists (CPJ) said following the release of their annual global census tracking journalists who were imprisoned and killed in 2021.

For the sixth year in a row, the census reported record numbers of incarcerated journalists. The census accounts for journalists held in government custody and remain imprisoned because of their work.

This year set a new global record with 293 journalists imprisoned as of December 1, 2021. Twenty-four journalists were killed during dangerous assignments, like reporting from conflict zones, in protests turned deadly, or in retaliation for their work.

What these numbers suggest, said CPJ Executive Director Joel Simon is that “governments are determined to control and manage information, and they are increasingly brazen in their efforts to do so.”

Along with the census, a special report from CPJ Editorial Director Arlene Getz, explained the trends.

Across different regions, many factors contributed to the common and “increasing intolerance of independent journalism”.

Government authorities, particularly in autocratic leaderships, have bolstered their efforts to silence dissent and criticism, which in turn has stifled press freedom in those regions.

Through the implementation of legal rulings and policies, journalists not only face the threat of imprisonment with alarming alacrity, but authorities manipulate legislation to extend their sentences or keep them in police custody.

Technological and legal policies to increase online surveillance impacted journalists’ ability to share stories online because they face the increasing risk of censorship and retaliation.

The special report reveals that at least 17 journalists were charged with cybercrimes, which could result in criminal prosecution for news reported and distributed online.

The CPJ census lists the countries with confirmed cases of jailed journalists.

This year, China topped the census list, with 50 journalists imprisoned.
This year marks the first time Hong Kong has been included in the census. Eleven journalists from Hong Kong-based news agencies were detained under mounting tensions from the pro-democracy protests and the implementation of the National Security Law in 2020.

Following China, Myanmar has risen in this year’s census in the wake of the military coup on February 2021 and the crackdown on media outlets with 26 jailed journalists.

However, the report suggests that this number may be much higher, and the situation is graver than reported. Several journalists have either fled the country in exile or gone into hiding. The deeper concern is that this crackdown on independent reporting will return to the harsh media censorship of previous military regimes.

Ethiopia has become the second-worst jailor of journalists in 2021 after Eritrea in sub-Saharan Africa. Many journalists have been arrested in the wake of the civil war in Ethiopia, between the federal government and armed forces from the Tigray People’s Liberation Front, with nine journalists still in custody.

Though they ranked lower than the top ten countries in the census list, the rapid decline in media freedom still comes as a shock because past reports indicated greater freedom than under the current government.

The report says that further investigations into these cases and those in other countries with confirmed imprisonments and deaths show a startling and disturbing attitude toward press freedom.

What the CPJ report reveals, that for all the international community’s calls for action to improve press freedom and protection for journalists, for all the public outcry when cases are made public, the countries which are most demonstrably guilty of suppressing press freedom have done little to address impunity or to change their tactics.

They are resorting to increasingly violent, intrusive, and invasive tactics to impede freedom of expression with a greater frequency. Even in the United States, 56 journalists were arrested or detained this year, primarily during protests.

The findings in the CPJ report reflects the continued tensions between governing authorities and the media. Without the media to hold them accountable, some governments will continue to act with impunity, sending the message of the lack of regard for freedom of expression if it threatens their power.

There is little hope that the number of jailed journalists will not be topped in the next year as long as countries act with impunity.

The CPJ will not give up its efforts to safeguard journalists.

In 2021, their advocacy contributed to the early release of over 100 journalists worldwide. In addition, they have recently launched a People’s tribunal to address impunity in journalist killings, which will rely on investigations and legal analysis to provide a framework for justice and accountability.

The CPJ’s Annual Report can be read here.