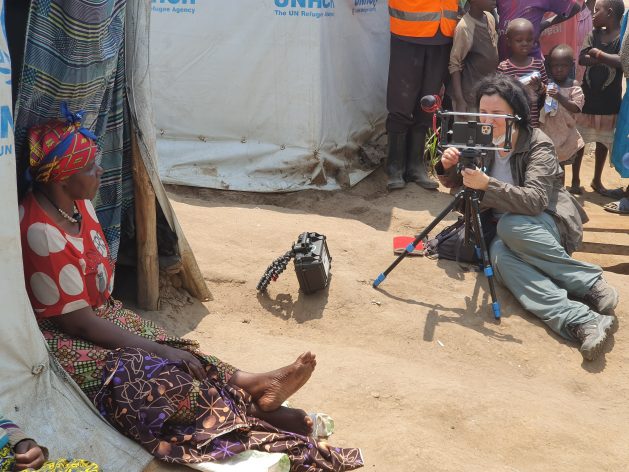 Elena Pasquini filming somewhere in the AKIgonze IDPs camp in the outskirts of Bunia in Ituri. Credit: Elena Pasquini

NEW DELHI, India, Jul 29 2021 (IPS) - The Democratic Republic of Congo is one of the most hostile and dangerous regions for journalists. A complex conflict, deeply rooted in the country’s past, allows very little freedom, both movement and the press.

“There are multiple actors involved, and as a journalist, we have the duty of admitting this complexity,” says Elena Pasquini, founder and editor in chief of Degrees of Latitude, in an interview with IPS. “Be aware of the difficulties when it comes to understanding the issues, and be careful of every single word we use to portray this conflict.”

Pasquini, who reported from the DRC earlier this year, says the risk of reporting from such a conflict zone is not just physical, not just a question of safety, but also highlights the responsibility journalists have in their work and how they cover a story.

“For a journalist and a foreigner, it’s really important to understand when a situation is potentially risky and identify the threats at an early stage. I was worried while travelling along roads that I knew were home to armed groups. I was scared each time I was stopped at a checkpoint and while interacting with the police or even walking in areas where kidnappings occur frequently,” Pasquini says. “It’s important to learn from the local colleagues and adapt our behaviour according to the local environments.” 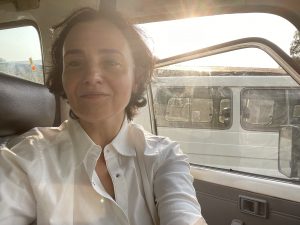 According to Journalists in Danger (JED), Reporters Without Borders (RSF) partner organisation in the DRC, at least 115 press freedom violations were logged in 2020. This report by RSF tells of how several journalists had been detained in response to complaints by provincial governors. A former minister sued one of RSF’s correspondents. Armed groups prevalent in the east of the country have attacked, threatened, or forced journalists into hiding. One journalist was killed.

“A journalist who has gone missing, his family members were informed by an armed group that he had been executed three days after abducting him,” the report says. “Journalists with many online followers have been the victims of smear campaigns.”

Women are often victims of abuse and violence, and in the DRC, rape is a weapon of war, says Pasquini. Crowded areas in the DRC are often chaotic and hotspots for fights, protests, and gatherings, which can turn deadly.

While covering a protest against an alleged extrajudicial execution, Pasquini had no choice but to trust the instinct of her local driver, who asked her to immediately stop filming, roll up the car windows and not make eye contact with anyone outside.

“At that point, I didn’t think about the weapons or the machetes the people surrounding our car could have had. I don’t know if I would have been a target or not, but I simply followed my driver’s instructions and got out safely. It’s truly the fixers, producers and the drivers who make the difference and can save your life in such situations,” Pasquini says.

Earlier in February this year, the Italian Ambassador to the Democratic Republic of Congo, Luca Attanasio, was killed. According to this report, the United Nations convoy he was travelling in came under fire near Goma, killing him, an Italian military police officer and a Congolese driver.

Pasquini was amongst the few international journalists present in the DRC at the time and had travelled along the same route and with the same convoy just a few days before the attack on the Italian Ambassador.

“That road connects Goma to Uganda, and it’s as dangerous as any area would be in a conflict zone. It is very difficult to have an idea of what really happened, but from my experience, I can say kidnapping to get ransom is very common on that side.”

“I hope the investigation will lead to the discovery of who is behind the attack of the Ambassador, it is hard, and impunity is common. Every day such crimes are committed, and it is very rare that someone is convicted for those crimes, or even just identified,” says Pasquini.

Over the years, multiple conflicts which escalated in the eastern part of the DRC forced almost 6000 people to flee their homes, making this crisis “the largest number of new displacements due to conflict in the world”.

“DR Congo is one of the worst humanitarian crises of the 21st century. A lethal combination of spiralling violence, record hunger levels and total neglect has ignited a mega-crisis that warrants a mega-response. But instead, millions of families on the brink of the abyss seem to be forgotten by the outside world and are left shut off from any support lifeline,” the Secretary-General of Norwegian Refugee Council, Jan Egeland, said in a statement. 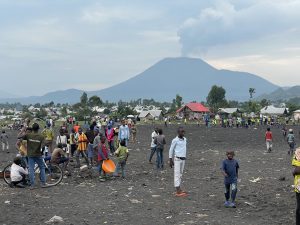 Human Rights Watch (HRW) estimates that there are 5.5 million internally displaced people in the country. Nearly 930,000 people from Congo were registered as refugees and asylum seekers in at least 20 countries worldwide. Numerous armed groups and, in some cases, government security forces attack civilians, killing and wounding many.

“Several thousand fighters from various armed groups surrendered throughout the year, but many have returned to armed groups as the authorities failed to take them through an effective Disarmament, Demobilization, and Reintegration (DDR) program. In many instances, armed assailants were also responsible for sexual violence against women and girls, HRW said.

In May, DRC President Felix Tshisekedi proclaimed a “state of siege” in North Kivu and neighbouring Ituri province to counter growing attacks and fights against armed groups.

Despite efforts by the government, violence and insecurity continue to threaten the safety of journalists in this region. JED & RSF have called out the DRC’s government to prioritise two major reforms to keep its promise to improve press freedom and create mechanisms designed to ensure rapid response to violations and follow up at the highest level. It also asked the government to establish a communication channel with press freedom groups and step up its protection for journalists, and combat impunity.

“The lack of legislation that can protect freedom of the press remains a challenge in the DRC. The level of violence is very high, so you have to put in place a lot of safety measures and do what you can to protect yourself,” says Pasquini.

“We need to keep the spotlight on the DRC and keep the attention on what’s happening in that country. Due to the ongoing conflict, it is already very dangerous to travel, to go to those places where stories are happening. It’s also very tough to verify information,” Pasquini says. “There are multiple threats from various armed groups, various checkpoints all over the region, institutional threats of defamation, they all make it very tough to tell the story, and that’s why we need to tell those stories even more.”