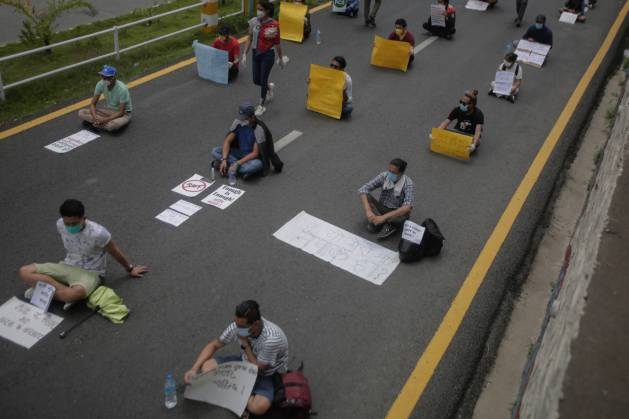 KATHMANDU, Jun 17 2020 (IPS) - Last week, Kathmandu erupted with protests organised collectively through the social web by Nepal’s urban young fed up with the shenanigans of the country’s septuagenarian rulers.

Most demonstrators outside the prime minister’s resident in Baluwatar or at Mandala were millennials — born after the democratic changes of 1990. They were outraged by one scam after another and the government’s mishandling of the COVID-19 crisis.

Pragati Parajuli joined the protests on 9 June after finding out about it through social media. She had been increasingly furious about the state of the quarantine facilities, neglect of returning migrant workers and felt she needed her voice to be heard.

“People are dying due to lack of food, they are deep in debt, and during such a scary time, when people have nowhere else to look at other than the government, the government has not been with the people,” said Parajuli.

The slogans during the demos zeroed in six main demands: PCR testing for everyone at risk, a 4-tier triage approach for the vulnerable population, proper protection for frontline health workers, and legal action against those stigmatising people at risk, relief for people most affected by the lockdown, and transparency and accountability in the Rs10 billion COVID-19 relief budget allocation.

The 9 June protest was largely peaceful, participants wore masks and maintained physical separation. It had been going on for more than an hour before police first miked asking protesters to leave the area. Then they advanced with water cannon, detaining 10 people.

“The crowd was triggered when police arrived to negotiate a timeframe for the protest, and started chanting murdabad,” explains Aayush Basyal who was also on the street that day.

Photographs of youngsters braving water cannons spread through social media platforms, and followers of the account COVID-19 Nepal: Enough is Enough snowballed. It even got the United Nations Human Rights to tweet calling on the government to ‘respect the right to hold peaceful assemblies and protests safely’.

The police attempt to quell a peaceful protest drawing attention to mishandling of the COVID-19 crisis, then took on a more aggressive anti-government tone. The government’s line has been that its COVID-19 lockdown procedures do not allow assembly of 25 or more people.

“I never expected the government to stoop so low and use force on teenagers who were sitting peacefully,” said Parajuli. “Why the concern about virus transmission at the end of the protest when it had gone on for more than an hour? Besides the police were themselves not maintaining social distancing.”

Shashank Shrestha does not recall any provocation from the protesters before the armoured vehicle with water cannon appeared. “If they allowed it go on for 20 more minutes, the crowd probably would have dispersed peacefully,” he added. “It was this show of force that fueled more protests the next day.”

Indeed, as the images and videos spread on the Internet, more young people responded to the call to come out on the street again not just in Kathmandu but in cities across Nepal.

Robic Upadhayay was among a dozen online organisers who was maintaining the Facebook site. He said: “Our view was that we should not have to protest. Let the government listen to the voices of the youth. My friends and I tried to share our views through social media, but the government did not listen. That is why we hit the streets,” explained Upadhyay.

The organisers then started getting requests to help mobilise protests in various other neighbourhoods, and the Facebook group became a platform that grew in a chain reaction to nearly 200,000 young people.

“We told them to protest, but to make sure that it was peaceful, non-violent, without political agenda and abiding by safety measures to reduce the risk of infection,” Upadhyay added.

During the 80-days extended lockdown, the government had failed to bring back the migrant workers-many stuck in countries without jobs. Nepal bring the first of the migrant workers back home but they did not meet the government’s own minimum standards and themselves became virus incubators. The young protesters were following this news on the digital media, and were aware of the hardships and suffering caused by government inaction.

As the protests escalated, #EnoughIsEnough started trending on Twitter, and other hashtags such as #SanitizetheGovernement and #DownwiththeIncompetency became online emblems of the protests. 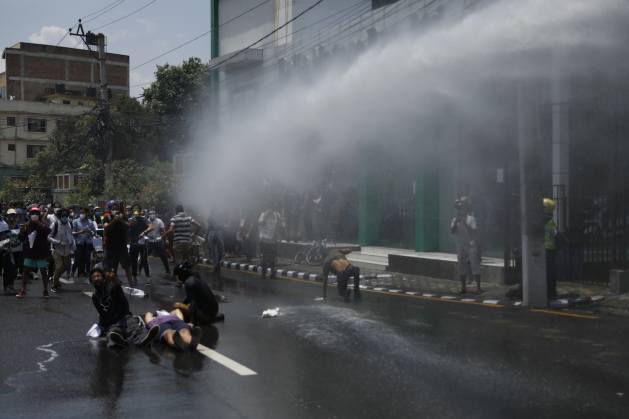 Compared to protests in other parts of the world against the economic impact of the lockdown, the demonstrators in Kathmandu raised slogans and carried placards with messages on the coronavirus that were precise and looked like they were written by epidemiologists.

For example, they carried banners asking for more PCR tests and to stop using the unreliable RDT. Indeed, the World Health Organization (WHO) does not recommend the use of Rapid Diagnostic test (RDT) which detects antibodies, and encourages the use of Polymerase Chain Reaction (PCR) which tests for the actual virus because the false positives in RDTs.

There are also media reports of irregularities in the continuing imports of RDT kits. The government has allocated 6.8 billion to its COVID-19 response, of which 2.3 billion is for quarantine management. People went to the streets demanding to know where all the money has gone. In repsonse, the prime minister’s press adviser Surya Thapa shared an expenditure report after the protesters’ demand for transparency grew.

Sabin Gyawali was one of the coordinators for the protest in Butwal who tried to lay down the rules about distancing masks, but he says that with more than 1,000 people turning up it was difficult to enforce.

“The protest was peaceful, there was no violence, and no conflict with the police,” he said. “We felt a bit guilty that although we were protesting about the pandemic, we ourselves were not able to abide by the social distancing protocols.”

The demonstrations were also infiltrated by political parties, which made it difficult to get everyone to follow rules. “When we said sit, they would stand up,” Bataule says. “We did stop them from saying things that were offensive, and they did not grasp the idea that a protest could be independent.”

In Bhairawa, Sudipa Chaudhary Mahato says she decided spontaneously to join the protests because she identified with the cause. But her parents were initially reluctant to allow her to go out.

It was also a spur of the moment decision for Smriti Baral, one of the organisers of the protest in Pokhara on 11 June.  After seeing the protests spread in Kathmandu she felt it was her duty to make the voice of the younger generation heard.

“We had been sitting peacefully for an hour when a group of men joined us and started shouting political slogans, and that was when the police intervened,” Baral recalls.

One of the slogans the young demonstrators used was ‘Police Hamro Sathi’, and this helped defuse the situation in some places. Elsewhere, they distributed red flowers to police, and in one instance on Saturday in Kathmandu police stood at attention and saluted while the demonstrators sang the national anthem.

To be sure, not all young people went out into the streets. Shikha Neupane said she supports the protest’s objectives, but disagrees with the method. “It is impossible to be physically separated when police intervene,” she said, and felt it was contradictory to be supporting PCR kits when the gatherings risked further spread of the disease. For Neupane, it was also the fear of becoming a carrier and infecting her grandmother.

Niraj Kafle has similar reasons for not joining: “The demands are legitimate, and they need to be addressed, but we are currently in a pandemic. What if there is a spike because of the protests?”

A petition addressing the demands of the demonstrations is circulating through social media platforms with nearly 5,000 signatures. Public figures like Miss Nepal Shrinkhala Katiwada, actress Priyanka Karki, and others like Ayushman Joshi, Sisan Baniya have shown their support through social media pages. Another online petition targets the Ministry of Health and WHO, and already has 12,000 signatures.
Yet another counter-petition which says the youth protests are putting thousands of Nepali lives at risk. Started by Binod Shrestha, it accused the demonstrators of having a political agenda and even called protests ‘second degree murder.’

The criticism seems to have hit home. In Facebook posts, some organisers have said the protests would continue, but in a way that does not require large gatherings of people. Indeed, the battleground appears to have shifted from the streets to cybersphere where there are heated discussions between the protesters and supporters of mainstream parties.
The protests also coincided with vote in Parliament on Saturday for an amendment to the official Nepal map that included Limpiyadhura, and many had asked that it be called off. Indeed, there were protests for the map and against the government going on simultaneously.

“It is a difficult time, and I understand why people are angry, I feel the same rage,” says Pragati Parajuli. “Some people see this as a moment in history to fight everything at once, but when that happens we lose sight of what we are fighting for. We need to be focused on the specific agenda of pressuring the government to be more effective in controlling the spread of the disease.”