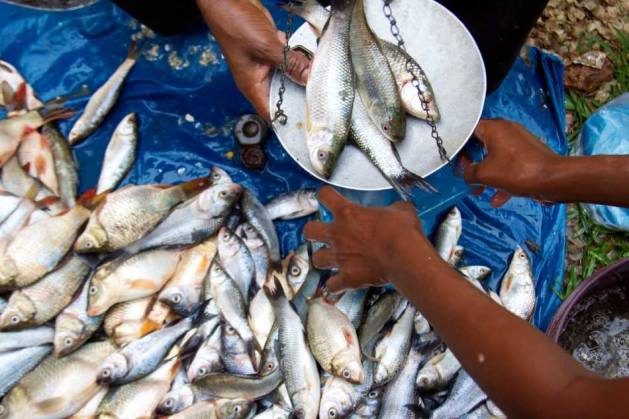 Securing the future of India’s fisheries both during COVID-19 and beyond, requires a deep dive into understanding their past, present, and possible future. | Picture courtesy: Arjun Swaminathan

NEW DELHI, Jul 13 2020 (IPS) - Fisheries and aquaculture are an important source of food production, nutritional security, employment, and income in India. The fisheries sector is a direct source of livelihoods for more than 20 million fishers and fish farmers; contributes INR 1.75 trillion annually to the gross value added to India’s economy; and is a major export earner, with fish being one of the most important agricultural commodities to be exported from India.

COVID-19 and the subsequent lockdown has left India’s fisheries in the lurch. However, India is not alone. Severe economic losses to fisheries have been reported across the world, and in all cases, the damage has been greatest for export-driven fisheries with complex supply chains. The virus may have been the trigger, but India’s barrel was already loaded with decades of well-intentioned but ill-fated policies, unregulated growth, and market instabilities. Securing the future of India’s fisheries both during COVID-19 and beyond, requires a deep dive into understanding their past, present, and possible future.

The past: Overcapacity of Indian fisheries

In 2011, labour-intensive trawl fisheries dominated more than half of India’s marine capture fish production, and it is likely that they continue to do so today. First introduced to India in the 1950s, trawling is a form of mechanised fishing that involves actively dragging a net through the water or on the seafloor, efficiently and indiscriminately catching everything in its path. Bumper catches, combined with government subsidies, fuel tax rebates, and growing competition lured a large proportion of India’s traditional fishers into motorising their traditional fleets. Between 1980 and 2014, the number of mechanised boats also grew from a mere 9,000 to more than 72,000.

COVID-19 and the subsequent lockdown has left India’s fisheries in the lurch. However, India is not alone. Severe economic losses to fisheries have been reported across the world, and in all cases, the damage has been greatest for export-driven fisheries with complex supply chains

Prior to 1976, there were no marine spatial regulations, such as the Exclusive Economic Zone (EEZ), Territorial Waters, and other maritime zones. This meant that mechanised fishing boats could efficiently exploit nearshore waters, leading to a decline in catch that was evident for mackerel, bombay duck, ribbonfish, and non-penaeid prawns as early as the 1980s. However, the per boat decline in catch was easy to ignore, as technological advances improved the overall ability to find, catch, and preserve greater quantities of fish, which continued to bring in ever-increasing revenues and export earnings.

With declining target stocks, fishing operations started catching a greater proportion of ‘bycatch’ or non-target species. Today, trawler catches can consist of anywhere between 50-90 percent of bycatch, which includes other seafood items, as well as non-edible species or ‘trash fish‘, which are bought by fish meal and fish oil (FMFO) companies. FMFO products, rich in dead marine biodiversity, are supplied to aquaculture and poultry farms, and at times even make it into the diets of our pets.

In the wake of all this development lay India’s traditional fishing practices and associated local ecological knowledge systems. As a result of a decline in target species and rising conflicts with traditional fishers, in 1988, Kerala became the first state to impose an annual seasonal ban on mechanised fishing within its territorial waters. Soon, others followed suit and by 2001 all of India’s coastal states had a seasonal fishing ban in place. In 2015, the centre established a uniform annual fishing ban (61 days) on all mechanised and motorised vessels operating in India’s EEZ.

The ban helps protect fish stocks and relieves pressure off the marine environment. It also creates a social safeguard, by reducing competition for traditional fishers and protecting marginalised fish workers from over-exploitation.

The present: COVID-19 and the monsoon ban

From the wastage of 10,000 metric tons of freshly caught seafood to the stranding of more than 15,000 migrant fish workers, the global pandemic has taken away the livelihoods of the millions of people involved in India’s fish production. On April 10th, 2020—two-thirds of the way through the first lockdown—the Ministry of Home Affairs (MHA) finally exempted fisheries and aquaculture from lockdown restrictions. But it was a little too late; irreparable damage had already been done.

Reopened fisheries faced disrupted commodity chains, a significant lack of consumer demand, and a rising fear of being infected by COVID-19. Migrant fishers—who make up a large part of India’s mechanised fishing workforce—were in no condition to go fishing. They had been stranded for weeks in deplorable conditions, on boats or at crowded fishing harbours, and they only wished to go home.

While the annual mechanised fishing ban began on the east coast on April 15th, 2020, the remaining permitted fisheries still struggled to re-establish themselves. States such as Kerala and Maharashtra made innovative strides in bringing seafood back on the table, but the majority of fishing operations continue to lie suspended in the unending lockdown limbo.

On May 25th, just days after Cyclone Amphan created havoc on the east coast, the Ministry of Fisheries, Animal Husbandry and Dairy (MFAHD) issued an order, opening east coast fisheries on June 1st (ahead of the regular June 15th start date) and modifying the west coast ban start date from June 1st to June 15th. This reduction in the annual fishing ban from 61 days to 47 days was claimed to be in lieu of the lost fishing days, but it most likely also helped absolve the government from any responsibilites related to financial compensation.

This amendment to the annual fishing ban is only for 2020, but it does little to solve current problems. The lifting of restrictions on mechanised and motorised fishing has exacerbated the struggles of India’s small-scale (non-mechanised) fishers and migrant workers—the most vulnerable sections of India’s diverse fishing population.

Not only has this increased competition and unnecessarily risked fishers’ lives during rough seas in order to supply to non-existent markets, it has also increased the likelihood of indebted fisher migrants being forced into bonded labour. These unfavourable developments have undermined the ban, the decades of negotiations that led to its extraordinary achievements, as well as the protection it offers to India’s dwindling marine resources.

The future: Self-sufficiency and sustainability

COVID-19 has made it clear that business as usual is no longer an option. It is a wake-up call to put people and the environment first. Fisheries are the only commercialised source of wild-caught protein, and they deserve our care and respect. For India, the current focus needs to be on the safety and well-being of fishers, the movement of fisher migrants back to home states, and financial and food relief support to fisher communities.

This lockdown is also an opportune time-out to reflect and revise the National Fisheries Policy Draft 2020 and the proposed 20,500 crore investment in marine fisheries, inland fisheries, and aquaculture. The new scheme does little to help fishers directly, mainly supports the wealthier and more powerful actors within the sector, and lacks provisions to improve the social capital of India’s fishing communities through education, healthcare, and environmental protection.

While the draft’s mention of hygienic fish handling and e-marketing strategies is a welcome plan for a post-COVID-19 world, the push to modernise our coastal villages, with new ‘state of the art’ harbours, landing centres, and fish markets will do little good without parallel improvements in India’s fisheries monitoring and management capacities.

The scheme also focuses on increasing inland and culture fish production, proposes the infusion of new technologies, and plans to promote fisheries development in new areas (including Ladakh!) for the “productive utilisation of waste land and water”. Setting aside the ethical, social, and ecological implications of what one considers as waste land or water, aquaculture operations often come with a long list of risks (for example, invasive species, water pollution, and disease).

One can draw parallels with the limited consideration here to the policies that promoted the mechanisation (and consequent exploitation) of India’s marine fisheries in the 1950s. COVID-19 is a game changer, and mere ‘growth’ and ‘productivity’ may no longer be reliable estimates of progress. A reimagining that emphasises health and well-being for humans and the environment is required.

Focusing on local and sustainable small-scale fisheries (SSF) would be one such option. SSFs tend to be more species-selective, support a lower catch volume, and use traditional fishing techniques that are COVID-19 safe as they involve fewer people, often land on beaches, and support a smaller consumer base. The world over, only those fishing businesses that supply locally or have short and simple commodity chains are surviving this new era. Supporting local demand rather than investing in foreign export-based fisheries will be a step in the right direction.