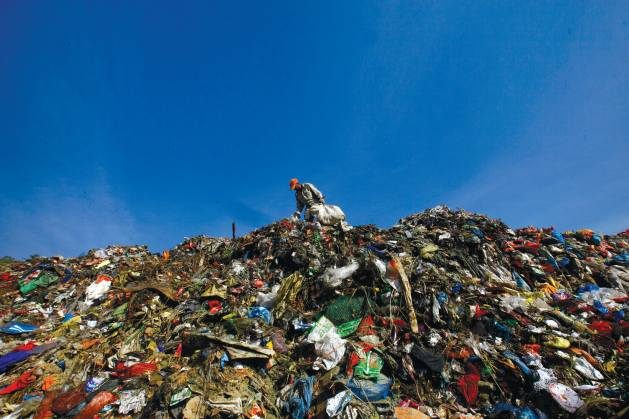 The COVID-19 crisis has unleashed a plastic pandemic, reversing the achievement of a decade of activism against single-use plastic worldwide, including Nepal. Credit: BIKRAM RAI

KATHMANDU, Aug 3 2020 (IPS) - The coronavirus pandemic was a respite for nature everywhere. The air was cleaner, trekking trails were pristine, the summit of Mt Everest was deserted, and worldwide carbon emission dipped by -26%.

However, there are dark clouds in that silver lining. The COVID-19 crisis has unleashed a plastic pandemic, reversing the achievement of a decade of activism against single-use plastic worldwide, including Nepal.

Personal protective gear (PPE) like disposable gowns are made from polyester or polyethalene. Surgical masks and N95 respirators are made from non-woven polypropylene fibre. Face shields and visors use polycarbonate or polyvinyl choloride. Coveralls are made with high-density polyethylene (HDPE). Most of these are single-use plastic.

During the peak of the outbreak, hospitals in Wuhan produced more than 240 tons of waste per day against 40 tons normally – with most of the waste being plastic PPEs. The United States is projected to generate an entire year’s worth of medical waste in just two months dealing with COVID-19, according to Frost & Sullivan.  The Thai government has reported an increase in plastic and styrofoam waste from 1,500 tons a day to 6,300 tons daily due to soaring home deliveries of food.

In Nepal, there are no exact figures but evidence suggests there has been a big increase in plastic waste from provision stores, relief distribution to the destitute during the lockdown, and quarantine centres. For lack of better alternatives, aid workers use plastic plates and utensils for meal distribution and well as polythene bags and thin single-use plastic for relief packaging.

“From a humanitarian angle the use of plastic for medical purposes and in relief is important, but it has long term environmental impact. Which is why we need a replacement for cheap and easily accessible single-use plastic,” says Shilshila Acharya of the Himalayan Climate Initiative.

She adds, “Another emerging problem is the improper disposal of face masks. These are made of polypropylene and are even worse than plastic because they are even more difficult to recycle and reuse.”

Across South Asia, cities are experiencing worse floods because of waterways choked by plastic waste. Plastic pollution in Nepal has been known to worsen the impact of floods during the monsoon by clogging up drains and rivers, as happened in Bhaktapur and Thimi in 2018 after a sudden squall.

Bhaktapur Mayor Sunil Prajapati says Hanumante River in his municipality invariably bursts its banks even through it is not a big river because of blocked drainage.  He told Nepali Times: “The river is like a gutter. It gets flooded every year because waste materials block the outlets and drainage.”

A three-year regional study by ICIMOD (International Centre for Integrated Mountain Development)’s  SANDEE (South Asian Network for Development and Environmental Economics) shows that 12.7% Bharatpur and 22.3% of Sylhet in Bangladesh cities are at the risk of flooding in lack of proper solid waste management system. Unblocking drains would limit flooding to 5.5% in Bharatpur, the report says.

Mani Nepal, who worked on the study says: “Solid waste, including plastic, must be properly managed to reduce the risk of long-term flooding in cities. Just building sewers will not solve the problem. Plastic pollution is already a major cause of floods, it can be disastrous in future.”

More than a million plastic bags are used once and thrown away in Kathmandu Valley every day, and it now forms more than 16% of the city’s garbage. Of the 204 tons of plastic waste generated in Nepal every day, 131 tons end up in the streets, drains, rivers and some of it makes it to landfill sites.

Plastics, being petroleum based, take at least 500 years to biodegrade, killing aquatic and land animals, and microplastics have found their way into the human food chain. Harmful chemicals can alter hormones and chromosomes in the human body, leading to cancer and damage to the reproductive system.

The Nepal government has repeatedly tried to enforce a ban on single-use plastics, but industrialists enjoying political protection have sabotaged all previous attempts.

Former Environment Minister Ganesh Shah tried but failed to implement a plastic ban he introduced in 2008. Plastic Bag Regulation and Control Guideline introduced in 2011 was not effective either in discouraging plastic use. A Gazette notice on 14 April 2015 announced a ban on bags thinner than 30 microns, but it was overshadowed by the earthquake only 10 days later.

The ICIMOD study also revealed that the state of garbage disposal significantly affects real estate prices which are on an average 25% higher and up to 57% higher in areas with proper solid waste management system. Similarly, the price of a house with a blocked sewer is at least 11% lower.

An estimated 70% of the daily domestic waste in Nepal’s cities are biodegradable, but it is not customary to segregate garbage. Often, organic and non-perishable waste are disposed together in plastic bags. Garbage collectors also do not sort the waste, which is why they end up directly at the landfill in Sisdole which is fast becoming a plastic mountain.

Sorting garbage at home has been shown to significantly reduce the volume of waste, allowing households to make their own compost, recycle and reduce as well as reduce the cost of garbage collection. Pre-determining time and day and placing for communal garbage collection and placing trash cans for pedestrians are other ways to prevent haphazard disposal of solid waste.

Bharatpur residents pay Rs30-100 a month for garbage collection and say they are willing to pay up to 30% more for proper waste management. This is an additional Rs5 million more than what the municipality has been charging for waste management. “This means local governments could better manage the problem of solid waste without too much effort, this requires only the will to implement,” says Mani Nepal.

Ward 10 of Bharatpur has been trying to reduce waste at source by buying plastic waste from households at Rs9 per kg, which it then sells to plastic recycling industries. The municipality also provides subsidy to those who want to turn their organic waste into biogas.

Bharatpur has shown that if there is political will, plastic waste can be reduced. And by not dumping plastic in drains and rivers, it is also protecting wildlife along the Narayani River in Chitwan National Park directly downstream.

The good news is that the global movement against the use of plastic is also having an effect in parts of Kathmandu. Polythene are being replaced by re-usable bags in shopping malls, restaurants and hotels discourage straws and plastic wrappings, and paper plates have replaced Styrofoam at some party venues.

While plastic-based PPEs have been vital in preventing the spread of the COVID-19 and are life savers for frontline health workers, if the SARS-CoV-2 persists longer there may have to be a move towards paper packaging and materials.

Says Shilshila Acharya: “The prolonged lockdown has meant that people are purchasing less, and are using fewer plastic items. We can build on this momentum to reduce plastic pollution in future.”