The UN: From the Sublime to the Hilarious

Roderic Grigson was Asia Pacific Vice President for Novell, a global networking company, working in Melbourne Australia until he retired from corporate life to become a full-time writer. He worked at the United Nations Secretariat in New York in the ‘70s and ‘80s as a technology innovations officer, serving in UN peacekeeping forces in the Middle East. He is the author of Sacred Tears, The Sullen Hills and After the Flames, a trilogy of thrillers set in war-torn Sri Lanka, and is currently working on his fourth book. 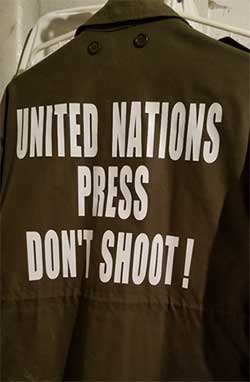 But there is also a lighter side to it, which is brilliantly laid out in a new book released last week on Amazon titled “No Comment and Don’t Quote Me on That.”

It takes years to write a good book, and in this insightful memoir, Thalif Deen, a former UN Bureau Chief and Regional Director at Inter Press Service (IPS) news agency, gives us a riveting memoir filled with observations that come from 40-years of stalking the halls and corridors of the ‘glasshouse by the East River’.

Told through a series of news stories, interviews, anecdotes, and personal recollections, No Comment is held together by flashes of surprising humour and an overarching third world focus and point of view. It comes as no surprise that some of his stories were picked up at the Delegates Lounge, a well-known watering hole for UN delegates.

He also describes an incident that took place when he was doing a wrap-up of the 1992, two-week-long international conference in Rio de Janeiro. Deen approached Dr Gamani Corea, a former Secretary-General of the UN Conference on Trade and Development (UNCTAD) and a member of the Sri Lanka delegation, for a final comment.

“We negotiated”, Dr Corea said with a tinge of sarcasm, “the size of the zero”, as he held out his fingers to indicate the zero, describing the response of Western nations who refused to make any concrete commitments to fund a plan for the protection of the global environment.

In his first year as a student at Columbia University, Deen was terrified of the hazards of crime-ridden subway travel in New York and scared of the impending winter. When he complained about his first-ever brutal winter in New York, a wise-cracking American classmate advised him: “The best remedy is to curl up in bed with a good book — or with someone who has read one”.

Though its scenes are scattered, they are individually memorable, evoking amazement and laughter in the same breath. Deen has always been a raconteur, often entertaining guests at various functions and parties with stories from his vast array of yarns, and this comes through his narrative in abundance.

Deen surprises the reader with an unaffected insider view of international reporting, recounting his stories with freshness and colour. A longstanding columnist for the Sunday Times, UN correspondent for Asiaweek, Hong Kong and Jane’s Defence Weekly, London, his firsthand experiences add importance to his common-sense take on global diplomacy.

The book’s title is taken from an encounter Deen had with a diplomat at the UN building. As a general rule, most ambassadors and diplomats do not tell UN correspondents either to go to hell or heaven – but avoid all comments on politically sensitive issues with the standard non-excuse: “Sorry, we have to get clearance from our capital”.

But often that “clearance” from their respective foreign ministries never came. Still, it was hard to beat a response from a tight-lipped Asian diplomat who told him: “No comment” – and as an after-thought, added: “And Don’t Quote Me on That”. 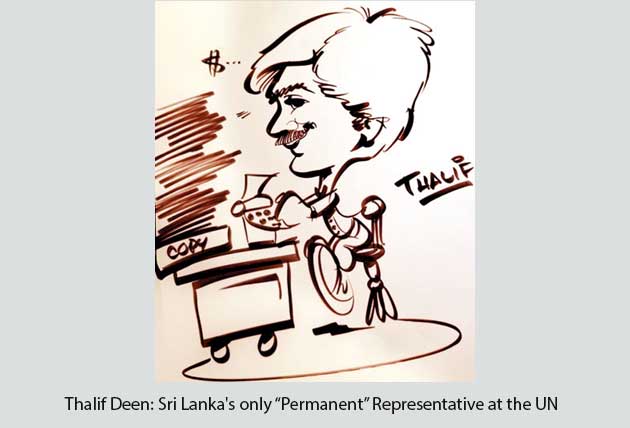 It is a gift that he has now written his long overdue memoir. Blessed with a robust sense of humour, Deen gives us the real scoop on headline stories with both wit and intelligence, a perspective that comes from mining his dog-eared reporter’s notebooks, of which he assures me, there are over a hundred.

It is also the story of how Deen did it. A former information officer at the UN Secretariat in New York in the mid-1970s, Deen has covered virtually every major UN conference on population, human rights, the environment, sustainable development, food security, humanitarian aid, arms control and nuclear disarmament in the past 40-years.

Working at the UN during the most dramatic events of our time — from the pursuit of war and peace in the Middle East to the humanitarian disasters in Africa and Asia, this book provides an insider’s view on what went on behind the ‘glass curtain’ during a period of extraordinary turbulence.

A Fulbright scholar with a master’s degree (MSc) in Journalism from Columbia University in New York, Deen was born and educated in Ceylon (now Sri Lanka). A student of Zahira College, Colombo, he graduated with an Economics degree from the University of Ceylon at Peradeniya. He became the first student from Sri Lanka (then Ceylon) to gain admission to the Graduate School of Journalism at Columbia.

At Peradeniya in the 1960s, it was the prevalent trend among most undergrads to fancy themselves either as Trotskyites, Communists or Socialists. When asked about his own political leanings, Deen told one of his professors he was a die-hard Marxist. ”But I followed Groucho, not Karl,” he declared.

Speaking at a corporate dinner, sponsored by the International Institute for Education (IIE), during his student days, he said he had arrived in New York with a degree of trepidation because his colleagues at Lake House, the newspaper office where he worked, cautioned him that Fulbright grants were given only to “half-bright students”. Mercifully, it wasn’t so.

Studying for his master’s in the early seventies in New York City, known then as the ‘murder capital’, was not easy. But having been brought up in the unforgiving northern suburbs of Colombo, he successfully navigated the asphalt jungle that was the Big Apple and has lived to tell the tale.

When he was in Iraq’s battle zone in Baghdad during the 1990 Gulf War, he was armed with a military flak jacket with a cautious warning inscribed on the back: “United Nations. Press. Don’t Shoot.” Perhaps it helped. Now, he says, with his tongue firmly planted in his cheek, he occasionally wears it in the mean streets of New York, a city where he has lived for over 45 years, and where a bank robber can get mugged as he flees to a get-a-way car.

He completed his studies before embarking on his remarkable career ‘reporting from the United Nations’, first as a UN Information officer, a UN correspondent for Janes Defence Weekly and finally as a UN correspondent and bureau chief at IPS.

Possessed with the curiosity, nimbleness of mind and openness to change, Deen stands out among veteran correspondents for the range of his experience and his gift as a storyteller. An eyewitness to history being made at the highest levels, with this unique perspective, Deen brings to life scenes from the past and present.

A story he recounts often is after a band of mercenaries tried to oust the Maldives’ government, he asked a Maldivian diplomat about the strength of his country’s standing army. “Standing army?”, the diplomat asked with mock surprise, “We don’t even have a sitting army.”

He said Deen had survived about 20 Sri Lankan Permanent Representatives (PRUNs) – some of them transiting through New York.

He is a splendid companion as I can personally attest to after working with him in New York in the ‘70s and ‘80s. One thing I most admire about him is that he has always remained true to himself, his principles, career, and origins. He is someone with genuine bona fides as a journalist and an unassailable commitment to the profession’s enduring values.

“No Comment” is a dizzying text, part memoir, part discourse on international reporting reality from a third-world perspective.

The book is available on Amazon. The link follows:
https://www.rodericgrigson.com/no-comment-by-thalif-deen/