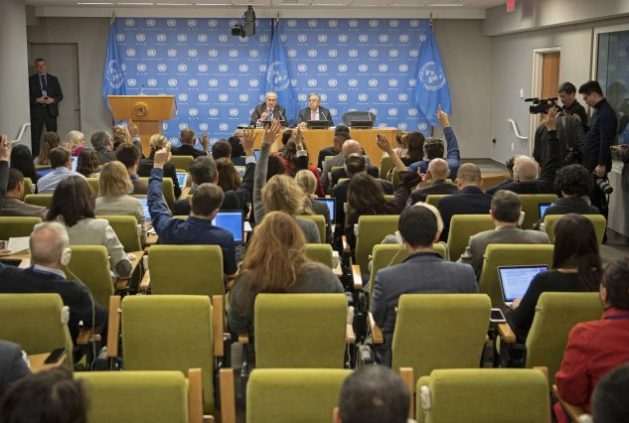 UNITED NATIONS, Jul 12 2021 (IPS) - When a Southeast Asian ambassador hosted a lunch for journalists, including reporters from the New York Times, the Wall Street Journal and the Washington Post, he told us there was an ulterior motive for the sumptuous lunch at his residence.

“We will soon begin our two-year term as a non-permanent member of the Security Council – and we need your cooperation (read: news coverage)”.

Perhaps he was reflecting a famous quote attributed to an American journalist who once said the freedom of the press is only to those who own one.

Still, for scores of journalists covering the UN for their newspapers– thousands of miles away from home– one of the most coveted datelines is “Reporting from the United Nations.”

Some of these correspondents, both full-time and part-time, come from developing nations, including India, Indonesia, Egypt, Brazil, Cuba, Malaysia, Bosnia, Singapore, Pakistan and Saudi Arabia, while others come from the Western world, including Italy, France, Germany, Canada, Australia, UK and the US, plus Russia and China.

They occupy two floors of the 39-storeyed UN Secretariat building— with free office space in one of New York’s most expensive real estate markets.

Besides reporting on military conflicts, civil wars, genocide and war crimes high on the Security Council agenda, most UN correspondents were also gifted raconteurs who could spin a tale or two, particularly from their home countries.

The late Dharam Shourie, UN Bureau Chief for the Indian news agency, Press Trust of India (PTI), pointed out that journalists back home, particularly in the 1950s and 1960s, could rarely afford the luxury of a tape recorder. So, most interviews, mostly with politicians and government bureaucrats, were either one-on-one or over the phone.

But if the interview got a strong blowback, politicians and government officials were quick to deny the entire story– or falsely accuse the reporter of either misquoting or concocting the quotes. Unfortunately, journalists had no proof to nail the lying politicians.

According to Shourie, there was a rare instance in the 1960s when a reporter, armed with a bulky tape recorder, went to interview an Indian politician. The politician asked the reporter: “What is it that you are carrying”.

Told it was a tape recorder, he said: “No tape recorders here. Leave it outside my office.” And added the punchline: “You are trying to deny me, my right to deny, what I am going to tell you.”

Shourie also told me about inviting a visiting journalist, a rigid vegetarian and a Brahmin Hindu, for lunch at the UN cafeteria. When he saw him serving himself beef stroganoff, Shourie was surprised and asked him: “I thought you were a strict vegetarian and did not eat beef.”

“Oh” said the visiting journalist: “I don’t eat Indian cows but I can eat American cows”.

Meanwhile, journalists, rarely if ever, were able to get any on-the-record comments or reactions from ambassadors, diplomats and senior UN officials because most of them followed the advice given to Brits during war time censorship in the UK: “Be like Dad, Keep Mum”.

But as a general rule, most ambassadors avoided comments on all politically-sensitive issues with the standard non-excuse: ”Sorry, we have to get clearance from our capital”.

But that “clearance” never came. Still, it was hard to beat a response from a tight-lipped Asian diplomat who told me: “No comment” – And Don’t Quote Me on That”. 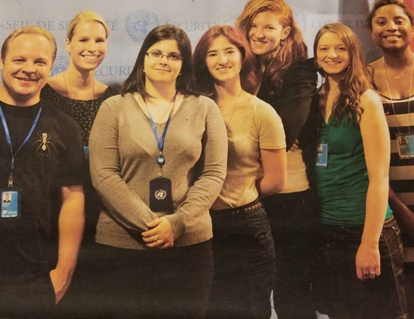 A group of IPS interns from Germany, the US, France, Sweden and the Netherlands. Credit: IPS

On the other hand, most senior UN officials never had the basic courtesy or etiquette to even acknowledge phone or email messages. The lines of communications were mostly dead.

When I complained to the media-savvy Shashi Tharoor, a former Under-Secretary-General for Public Information and a one-time journalist and prolific author, he was explicit in his response when he said that every UN official – “from an Under-Secretary-General to a window-washer”—has the right to express an opinion in his or her area of expertise.

But that rarely or ever happened.

However, there were exceptions: When Inter Press Service (IPS) launched its daily UN conference newspapers, beginning with the 1992 Earth Summit in Rio, we were desperately chasing diplomats to get a sense of what was going on.

The meetings were mostly behind closed-doors, with the 134-member Group of 77, the largest single coalition of developing nations, expressing disappointment at the absence of any concrete pledges for funding a global environmental plan.

As I was doing a wrap-up of the two-week long conference, I approached Dr Gamani Corea, a former Secretary-General of the UN Conference on Trade and Development (UNCTAD) and a member of the Sri Lanka delegation, for a final comment.

“We negotiated”, he said with a tinge of sarcasm, “the size of the zero”, as he held out his fingers to indicate the zero.

When we ran a summer internship programme at IPS, I also advised our interns of how crucial the lead para was in any news story—with would-be journalists spending weeks or months in journalism schools trying to crank out the perfect lead (or as the Americans call it the “lede”).

I quoted the demanding editor (Walter Matthau) in the 1974 Billy Wilder classic “The Front Page” (there were three remakes of it) who berates his reporter (Jack Lemmon) for missing the fact that his fictional newspaper “The Examiner” had landed a scoop in tracking down a killer.

Matthau complains he doesn’t see this in the lead while Lemmon responds that it was in the second para. An indignant Matthau shouts back: “Who the hell reads the second para (in a news story)?”

When I discussed some of the great newspaper headlines, I told my interns about one such legendary headline in the London Times in 1986 when a British Labor party politician Michael Foot was appointed to chair a committee to look into nuclear disarmament in Europe. The classic headline read: FOOT HEADS ARMS BODY. And a legend was born.

Meanwhile, there was a longstanding myth that journalists can do no wrong – and newspaper editors back home usually have the last word responding to any denials of a published news item: “We stand by our story” or “This correspondence is now closed”.

Still, I remember reading an anecdote about a newspaper in a small town in mid-West USA which erroneously ran an obituary of an ailing town official in the “Deaths” columns.

The indignant official called the newspaper editor from his hospital bed to confirm he was still alive and kicking—and demanding a retraction. “I am sorry”, said the editor,” We usually do not carry any corrections, but we can list your name under our “Births” column tomorrow”.

And then, there was at least one senior UN official with an off-beat sense of humor who recounted an incident — but insisted it should be “strictly off the record” lest he be accused of male chauvinism”.

He said he was speaking at a press briefing in Europe to launch a UN report, when following the briefing, several journalists rushed to the podium, as they most often do, with more questions or seeking exclusive quotes.

“There was this young buxom European woman reporter,” he said, “who approached me with a label pinned to her chest which read: PRESS”. And I did not know what to do”.

Thalif Deen, a former UN Bureau Chief for Inter Press Service (IPS) news agency, is the author of a newly-released book on the United Nations titled “No Comment – and Don’t Quote Me on That” from which this article is adapted. Published by Amazon, the book is mostly a satire peppered with scores of anecdotes-– both serious and hilarious. The link to Amazon via the author’s website follows: https://www.rodericgrigson.com/no-comment-by-thalif-deen/