COP26: the Heat is On, But Climate Leadership is Off, Warns UN Report 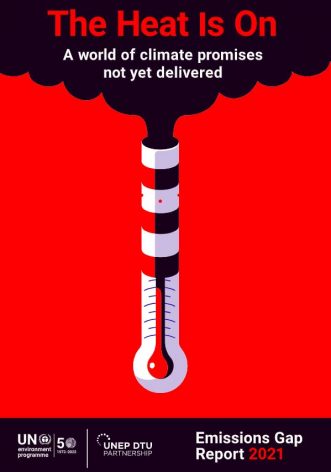 UNITED NATIONS, Oct 29 2021 (IPS) - When over 100 political leaders meet in Scotland next week for the UN Climate Change Conference, the very future of our planet seems to hinge on the outcome of the summit which is scheduled to take place October 31-November 12.

The 26th Conference of Parties (COP26) meets amid wildly-changing weather patterns worldwide– including the devastation caused by wild fires in 13 states in the US, plus Siberia, Turkey and Greece, heavy rains and severe flooding in central China and Germany, droughts in Iran, Madagascar and southern Angola– all of them warning of a dire future unless there are dramatic changes in our life styles.

The United Nations says rich industrialised G20 nations account for 80% of global emissions—and their leadership is needed more than ever. The decisions they take now will determine whether the promises and pledges made in Paris in 2015 are kept or broken.

And at least four countries– China, Australia, Russia and India – have yet to make new pledges to cut their emissions. Australia, however, came up with an eleventh-hour announcement this week.

The impending hazards also threaten animal and plant species, coral reefs, ice sheets in Greenland and West Antarctica, and projects a sea-level rise that threatens the very existence of the world’s small island developing states (SIDS) which can be wiped off the face of the earth.

Will COP26 come up with concrete commitments? Or will the summit be another try in a lost cause?

“Less than one week before COP26 in Glasgow, we are still on track for climate catastrophe even with the last announcements that were made. “

The 2021 Emissions Gap Report shows that with the present Nationally Determined Contributions (NDCs) and other firm commitments of countries around the world, “we are indeed on track for a catastrophic global temperature rise of around 2.7 degrees Celsius.

Everyone has the right to a healthy environment, free of pollution and its harmful consequences. Credit: WHO/Diego Rodriguez

As the title of this year’s report puts it: “The heat is on.” And as the contents of the report show — the leadership we need is off. Far off, he said.

“We know that humanity’s future depends on keeping global temperature increase to 1.5 degrees Celsius by 2030. And we also know that, so far, parties to the Paris Agreement are utterly failing to keep this target within reach.”

And the report also shows that countries are squandering a massive opportunity to invest COVID-19 fiscal and recovery resources in sustainable, cost-saving, planet-saving ways.

So far, the report estimates that only about 20 per cent of recovery investments will support the green economy.

As world leaders prepare for COP26, this report is another thundering wake-up call. How many more do we need? Guterres asked

Juan Pablo Osornio, Senior Portfolio Manager, Global Climate Politics, at Greenpeace International, told IPS: “The science is very clear, we need urgent, dramatic and constant emission reductions if we are to stay with the 1.5 oC limit.”

When governments come to Glasgow, he said, they will feel the pressure to act. Nations facing existential threats and a movement composed of Indigenous Peoples, front line communities and youth change the political cost equation and will make sure concrete commitments are made to reduce emissions.

“Glasgow is essentially about who the world belongs to and who we are as human beings”.

He pointed out that negotiations in Glasgow will be about drafting the rules to implement the Paris Agreement.

“The rules should protect the livelihoods of the communities that are most exposed to climate impacts, facing existential threats now and youth, not the bottom line of the industry that created the climate crisis in the first place”.

Rules agreed at Glasgow, he said, should send a clear message that the age of fossil fuels is over and set forward a path for governments to cooperate in the transformation needed to meet the Paris Agreement goals.

“Although worth mentioning that some governments like Gambia already have. We certainly expect political will to bend towards enhancing commitments that will get us closer to halving emissions by 2030 and set us on a path within the 1.5 oC limit.”

Glasgow will create momentum for governments to announce higher targets and follow-up at home with the necessary policies at home to implement them.

He said civil society will bear witness and call out any greenwashing from these announcements, messages that make those talking look responsible, while doing little to nothing to change their polluting ways.

Asked about the four countries – China, Australia, Russia and India – not making new pledges to cut emissions, he said: “Yes, it is very likely that we see these countries come up with new pledges, while China is likely to submit a new NDC, Australia will announce its anodyne net-zero target, followed by something similar from Russia and India”.

“Long-term pledges are not worth the paper they are written on, unless they are anchored on national policy, backed by enforcement, and motivated on action: on coal plants being shut down and wind farms being open; on no more internal combustion engine cars on the street, replaced with a safe, comfortable, fast and carbon free transportation system; and on abundant, lush and diverse ecosystems all over the world,” he declared.

Asked about the 1.5 degree pathway, Matthew Reading-Smith, Communications Coordinator at CIVICUS, based in Johannesburg, told IPS that it was highly unlikely.

Even in the most optimistic scenarios, the 1.5 degree target is increasingly out of reach. The current NDCs are a collective failure and do not meet the scale of the crisis we face.

At this stage, he said, the only country that has submitted a Nationally Determined Contribution consistent with the 1.5 degree goal is The Gambia.

“These negotiations need accountability, and there is an inherent power imbalance within the UN talks, between industrialised countries and countries in the global south. This has only been compounded by the health crisis, and the communities most affected by the climate crisis are also suffering an artificial shortage of vaccines,” said Reading-Smith.

These communities will largely be left out of the physical negotiations, which are critical in holding the high polluting member states to account.

A practical and critical area where industrialised nations need to be held to account is over their failed commitment to deliver US$100 billion a year to countries in the global south to help them adapt to climate change and mitigate further rises in temperature, he noted.

“Meeting this goal is an important litmus test in raising the trillions of dollars needed annually to halt global warming and bring net carbon emissions to zero”.

Like all COPs, there will be a flurry of far-in-the future pledges and declarations, including from countries that have yet to share updated carbon reduction targets.

Based on the 110+ national plans that have already been submitted, we can expect remaining pledges to be light on actionable detail and woefully insufficient in limiting global heating to 2C, he added.

As there has been a lack of public consultation in the design of these national roadmaps, any pending pledges from countries like China, Russia, Australia and India are more likely to reflect business interests rather than the advice and ambition from civil society groups, he declared.

Meanwhile, UN High Commissioner for Human Rights Michelle Bachelet said, on the eve of COP26: “It is time to put empty speeches, broken promises, and unfulfilled pledges behind us. We need laws to be passed, programmes to be implemented and investments to be swiftly and properly funded, without further delay.

Only urgent, priority action can mitigate or avert disasters that will have huge – and in some cases lethal – impacts on all of us, especially our children and grandchildren.

States attending the COP-26 meeting in Glasgow need to fulfil their existing climate finance commitments, and indeed increase them — not ignore them for a second year in a row. They need to immediately mobilize resources to mitigate and adapt to climate change, said Bachelet.