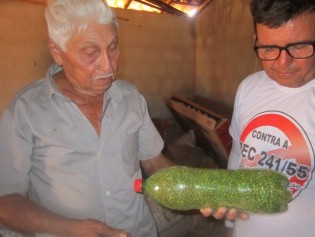 By Mario Osava
In his 76 years of life, Raimundo Pinheiro de Melo has endured a number of droughts in Brazil’s semi-arid Northeast region. And he remembers every one of them since 1958. “The worst one was in 1982 and 1983, the only time that the river dried up,” said Pinheiro do Melo, who has lived near the river since 1962. “The one in 1993 was also very bad,” he told IPS, because neither Bolsa Familia nor Networking in Brazil’s Semi-Arid Region (ASA) existed yet, which contribute to a less traumatic coexistence with droughts like the current one, which has dragged on for five years.

By Fabíola Ortiz
Every day, Celina Maria de Souza rises before dawn, and after taking four of her children to the nearby school she climbs down the 180 steps that separate her home on a steep hill from the flat part of this Brazilian city, to go to her job as a domestic. In the evening she makes the long trek back up.

By A. D. McKenzie
As governments struggle to find ways out of the persistent global financial crisis, Brazil’s development model offers an alternative path to recovery and growth, according to some economists and politicians.
ADVERTISEMENT ADVERTISEMENT