DETROIT, Michigan, Oct 17 2008 (IPS) - At 76, Daniel Ellsberg is still vocal. The man who leaked the Pentagon Papers in 1969, leading to the fall of President Richard Nixon, is speaking out this time on the 2008 presidential election. 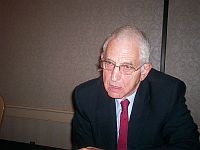 IPS correspondent Bankole Thompson caught up with Ellsberg in downtown Detroit, where he keynoted the opening of the 2008 National Lawyers Guild (NLG) convention.

The celebrated whistle-blower has reservations about the candidacies of both Democrat Barack Obama and Republican John McCain. But he still believes an Obama presidency would better deal with the constitutional crisis of the last eight years.

IPS: In your speech to the NLG, you said Nov. 4 will be an election between 'two monarchies.' Explain? DE: The last seven years have expanded the powers of the president well beyond the bounds of the American constitution. Even [McCain's running mate] Sarah Palin said the other day 'well, it's rather flexible.' Well, it is not flexible enough to accommodate their view of the constitution of the president's role, which is that of a king – exactly what the constitution meant to exclude was a ruler [who is] essentially beyond the laws. That's what the checks and balances were meant to reject.

With the cooperation of Congress, they really have said in the age of terrorism the president is a law unto himself. The fact is neither [Obama nor McCain] will inherit the limitations that are implicit in the constitution. If that's going to change, I do not think it will be by the efforts of the next president. No president has voluntarily cut back on the powers that they inherited when they came into office. It takes Congress to do that.

Again they won't do it without the public pressing them. There is some movement now for impeachment and for investigations that Congress has not responded to. I can't tell you whether it's because the movement is so small, and it is a minority or because Congress is so resistant. Why is Congress so uninterested in defending their own rules, their own powers?

IPS: If Obama won't do much to curtail presidential powers, why do you contend that it's 'urgent' for him to be elected? DE: I disagree with Obama on many points of foreign policy and I'm very sorry that he has not stood up for the constitution. But in comparison with the Republicans, except Ron Paul who took the constitution seriously, any of the Democratic candidates [would be better].

To say the Republicans are no worse or no different is absurd. They've been consistently very much worse. I think if McCain were elected the chances of war with Iran alone would be much higher. I don't think there is chance with Obama. I think with McCain there is a high chance of war with Iran. That alone is reason to make it urgent to elect Obama.

It is not just a matter of his being better than McCain. That's a very low standard. He of course in many ways looks much more promising than people we've had.

IPS: Has any government in the past reduced the military budget? DE: Interestingly, the last one seriously to do it was Harry Truman just before the Korean War. Now you may not believe this, but he was getting the budget down to 10 billion dollars. And Korea came along and his backers used that as an excuse to quadruple the budget in a year and a half to two years. It went up to 40 billion dollars and never came down again. So that was an example after World War II.

The then secretary of defence [Louis Johnson] wanted to run as a president and his campaign was going to be "I reduced the defence budget" and that was the last we heard of that. There was some talk of doing it after the Cold War and that didn't last very long. Otherwise it's going nowhere but up.

IPS: Which of the two, Obama or McCain, would be more prone to secrecy? DE: Whether Obama would really, greatly change the system I don't know. But he has raised the secrecy issue and proposed to look at our regulations and not allow allegations of national security to trump everything. I think it's possible he would be much more open.

Both Clintons are rather secretive themselves in their own political world. But in terms of declassifying [President Clinton] was pretty good on that. And that was all reversed of course by George W. Bush.

For example, something Obama could do right in office is he could change the executive order Bush put in which made it much harder to get into presidential archives. George W. Bush, obviously in order to protect his own father, Dick Cheney and Donald Rumsfeld, made it very much harder to get at a president's papers once he was out of office. Obama could change that with an executive order. He has nothing personally to worry about there. He is not related. It is not a dynasty here. Clinton would never do that now because they have too much to hide.