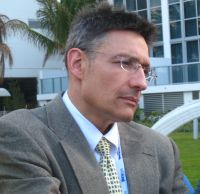 Worldwide, financial centres with bank secrecy laws are blamed by the Organisation for Economic Cooperation and Development (OECD), which represents 30 developed economies, for hiding some 5 to 7 trillion dollars offshore so the profits they produce evade taxes.

The Miami conference dealt with these offshore financial centres, and the significance and global impact of the myriad of business transactions that is conducted in and through them.”

Excerpts of the interview follow. He is speaking not on behalf of the committee, but rather expressing his own views.

IPS: You said at the conference that information received by the Permanent Subcommittee of Investigations of the Senate about the activities of some institutions pointed to structures that were created for one reason: to avoid tax liability. What institutions were you talking about? BOB ROACH: I was specifically referencing the hearings that took place in July last year and lasted until this year, which focused on activities of UBS in Switzerland and the LGT Group, an asset management company in Lichtenstein.

IPS: One of the issues raised by the G20 in April was the need to have country-country agreements to deal with tax-information sharing about clients of banks and companies set up in offshore jurisdictions. How effective are they? BR: The fact that you have agreements in place doesn’t really mean or help a lot if jurisdictions won’t comply with them. And this is a problem in a country when we try to seek information. Often the government (that requests the information) has to prove the case before it gets the information it needs to prove the case.

So while countries can say they have exchange agreements, it’s about the details. Agreements are written in such nebulous language, there are such strict requirements (to comply with in order to get information), that it’s impossible. These really are not effective agreements that increase transparency.

IPS: Most people don’t know that the U.S. has its own tax havens: Delaware, Nevada and Wyoming. How serious is this problem and what are the U.S. agencies doing about them? BR: It is a very serious problem. Certain investigations as early as 2000-01 (showed that) the incorporation procedures in those states are very weak. Most states will incorporate entities without really having any kind of understanding of who the true controlling persons or beneficial owners are. This is a weakness that has become exploited by many interests, particularly overseas, to facilitate the kind of activity that we worry about. And it is something that really has to be ended.

On a couple of occasions now, Senator (Carl) Levin has introduced legislation to stop this type of activity by requiring states to collect more information on the ownership, on who is behind entities that are being incorporated in these states.

Recently, Senator Levin, Senator (Charles) Grassley, and Senator (Claire) McCaskill introduced the incorporation transparency and law enforcement act that requires states to collect the kind of information that will allow the identification of true parties behind the entities that are established in these states.

IPS: When we are talking about these states, the problem of incorporation makes them havens of some sort. But we are not talking about banking secrecy, which the U.S. does not have. Is that correct? BR: The U.S. prohibits the release of personal information on individuals. But it doesn’t have the kind of laws that criminalise the release of information of accounts simply to protect the secrecy of the accounts.

IPS: Do you that think the offshore banking secrecy has contributed to the worldwide financial crisis? BR: I’m not sure if it’s the secrecy as much as it is the regulatory mechanisms that go along with these jurisdictions. And that has to do with the understanding and approval of types of financial products that allow engaging in various transactions. And what we see is that some of these structures and financial products are more and more complex, to the point of where some of the people who design and some of the institutions that implement them don’t fully understand their impact, risks, and liabilities downstream.

We begin to face really troubled situations because if we begin to have a collapse of these corporations, that quickly spreads through the system because so many parties can be affected by these relationships. And suddenly the system becomes relevant because no one understands who else might be tied in and who else may be affected.

Many experts need to say that a big factor in the financial crisis goes back to the lack of strong regulatory regimes and a strong oversight in reviewing and monitoring this kind of transactions before they are allowed into the market place.

IPS: At the conference, people referred frequently to the “Stop Tax Haven Abuse Act”, which Senator Levin introduced (and has been co-sponsored by President Barack Obama when he was a senator). Can you tell us what that would do if it was passed? BR: Some of the provisions in the Act are tools aimed at the enforcement of our laws against those who want to exploit the existing tax laws by enacting a set of presumptions against people who would try to set up and hide their assets and tax obligations. It would strengthen various penalties against enablers. It would increase the amount of time that the IRS has to conduct offshore investigations.

It would try to stop abusive practices that take place under the current law with respect to residing structures to payments of taxes in certain transactions by utilising different financial instruments. So there are a number of provisions in there that would both enhance enforcement making it more difficult for parties to hide assets offshore and also increase penalties for those trying to help others abuse the system. It would give more power to the IRS to pursue its investigations.

IPS: Are the hearings set yet for this bill? BR: That would be referred to the finance committee, and that has not been scheduled. It is not something the Permanent Subcommittee of Investigations or (chairman of the Permanent Subcommittee on Investigations) Senator Levin would have control over. However, as everyone has recognised, there has been a lot of talk from the administration and leadership in congress about the hope that there will be legislation to address a variety of these offshore issues.

*After this interview was conducted, the Swiss reached an agreement over a double taxation treaty with the United States in what was seen as a key step towards removal from the Paris-based OECD “grey list” of uncooperative tax havens.

And on Monday, Jul. 13, the legal action against Swiss banking giant UBS by U.S. authorities seeking access to records of some 52,000 of UBS’s U.S. clients was delayed, and the sides were given until Aug. 3 to find a settlement.