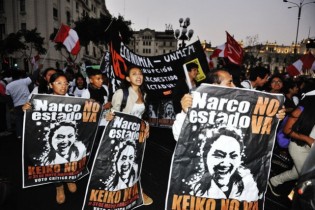 By EurasiaNet Correspondents
An Iranian entrepreneur who is the subject of U.S. and EU sanctions for laundering oil money on behalf of Tehran is operating a successful family of businesses in Tajikistan.

By Hilaire Avril
As several African governments examine the possibility of setting up their own "offshore" financial centres, the trade name for tax havens, campaigners are calling for transparency and fair tax regimes.

By Emad Mekay
Middle East countries have seen the largest increase of illicit outflows of funds to richer nations, depriving the developing nations of much needed development money, a new international report shows.

By Helda Martínez
Football, the most popular sport in Colombia, has been subject to heavy pressures from drug trafficking since the mid-1970s. A new study shows that the illicit trade continues to tarnish the upper echelons of this sport.

By Gonzalo Ortiz
"It sounds incredible, but it's just a matter of a letter that wasn't turned in on time," Ecuador's attorney general said in regards to the Financial Action Task Force decision to qualify the country as "posing a risk to the international financial system."

POLITICS: Not Quite Cricket – India’s Most Popular Sport on Trial

By Ranjit Devraj
Allegations that India’s junior foreign minister Shashi Tharoor had swung outsize ‘sweat equity’ for a female friend in a newly floated professional cricket league franchise may have cost him his job, but it may also expose the multi- million dollar India Premium League (IPL) as a massive money-laundering enterprise.

By Julio Godoy
New cases of tax evasion in several European countries are showing the limits of the informal agreements reached between the Organisation for Economic Cooperation and Development (OECD) and tax havens such as Switzerland, Luxembourg and Liechtenstein.

By Julio Godoy
Numerous failures by industrialised countries’ governments and central banks in managing the financial crisis are feeding the next bubble, which most likely will again provoke economic woes such as recession, unemployment, and poverty, according to economists and analysts.

By Hilaire Avril
Illegal capital flight in the form of corrupt, criminal and illicit commercial proceeds out of developing economies could be as high as one trillion dollars a year.

By Ángel Páez
"One way of ensuring the future of journalism is to improve content quality, and this means investigating what is deliberately hidden, like corruption," said Gerardo Reyes, a reporter for the Miami newspaper El Nuevo Herald, on a visit to the Peruvian capital.

By Danielle Kurtzleben and Ali Gharib
Governmental corruption and the refusal to cooperate with U.S. counter-drug efforts are worsening a ballooning drug trafficking problem in Venezuela, according to a new report by the investigative office of the U.S. Congress.

By Lucy Komisar
At a recent conference in Miami organised by Offshore Alert, a specialised media organisation focused on financial crime, IPS correspondent Lucy Komisar sat down with veteran investigator Bob Roach to discuss the hurdles facing regulators trying to crack down on tax havens, which cost the U.S. alone an estimated 100 billion dollars annually.

By Tito Drago
Trade between Spain and Equatorial Guinea is flourishing, amidst calls by activists for the government of Spanish Prime Minister José Luis Rodríguez Zapatero to push for democracy in this tiny country on the Atlantic coast of Africa, still under the yoke of dictatorship.

COLOMBIA: All the President’s Spies

By Javier Darío Restrepo
Colombian journalist Hollman Morris phoned an international news agency and said in an agitated voice: "I am being followed by the police."

EGYPT: Muslim Brotherhood on the Mat

By Adam Morrow
Several leading members of the Muslim Brotherhood opposition movement stand accused of plans to form an "international network of organisational cells." Its leaders say the charges are blatant fabrications.

By Ranjit Devraj
General elections currently being contested in India have brought an unusual issue to the fore - the repatriation of more than a trillion dollars believed to have been stashed away in Swiss and other tax havens.