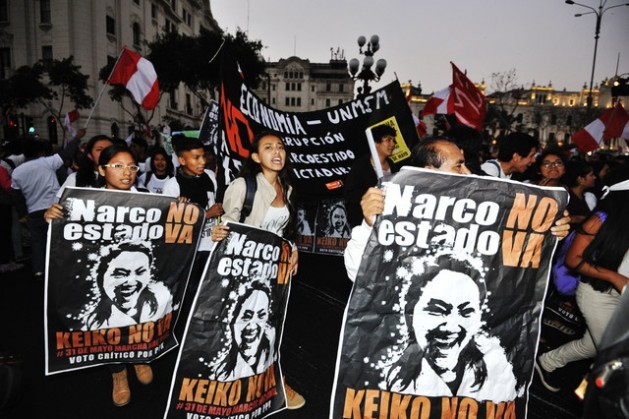 “No Narco-state, No Keiko!” was the chant repeated endlessly by protesters during the massive May 31 demonstrations in Lima and many other cities in Peru against the possible triumph of presidential candidate Keiko Fujimori. Credit: Courtesy of La República

LIMA, Jun 3 2016 (IPS) - Thousands of Peruvians took to the streets of Lima and other cities to protest the likely triumph in the Sunday Jun. 5 runoff election of Keiko Fujimori, the daughter of former president Alberto Fujimori, who is serving a 25-year sentence for corruption and crimes against humanity.

If Keiko Fujimori wins, as indicated by the polls, it will be the fourth time a Fujimori is elected president.

Alberto Fujimori (1990-2000) spent two full terms in office and his third term was cut short (he served less than one year) due to a corruption scandal revolving around his security chief Vladimiro Montesinos. His administration was marked by human rights violations and a self-coup in which he dissolved Congress, suspended civil liberties and established government by decree.

“A triumph by Keiko Fujimori represents for Peruvian democracy, on a symbolic level, the exercise of shameful masochism on the part of those who already suffered the crimes and horror of her father’s government…Her election would amount to support for a way of governing that violated all the principles of democracy.” – Julio Arbizu

On May 31 and two previous occasions, enormous crowds of demonstrators took to the streets in Lima and other major cities to protest the candidacy of Keiko Fujimori, in protests similar to those she faced as first lady – a position she held informally after her parents divorced – during the campaign in which her father was reelected to a third term, in 2000.

Keiko Fujimori, 41, is facing off with banker Pedro Pablo Kuczynski, 77, who served as prime minister and economy minister in the government of Alejandro Toledo (2001-2006). They are both running for president for a second time: in 2011 she came in second and he came in third in the elections won by Ollanta Humala.

In the last two opinion polls, Fujimori was slightly ahead of Kuczynski, which could change due to the growing denunciations of corruption and other irregularities against the candidate for the right-wing Fuerza Popular, which groups the supporters of 77-year-old Alberto Fujimori, who has been in a cell in a national police station on the east side of Lima since 2007.

Since last year, Keiko Fujimori has been seeking to project an image of herself as having nothing to do with the authoritarian practices of her father, in a strategy that has included populist promises aimed at neutralising the anti-Fujimorista vote that led to her defeat in 2011.

But during the campaign that got underway in January, the candidate has faced a growing number of accusations of shady financing, manipulation of the media, false claims about her political opponents, and other practices that put people in mind of the way her father did things.

“Those of us who fought the authoritarianism and corruption of the government of Alberto Fujimori believe that a victory by his daughter Keiko Fujimori would represent a setback to democracy,” said Salomón Lerner, President Humala’s former prime minister.

“Keiko Fujimori, who at the start of her election campaign criticised the excesses of her father, was repeating his practices by the last stage of the campaign. And one demonstration of what I’m saying is the appearance of shady figures, with dubious reputations, who worked with Alberto Fujimori,” Lerner told IPS.

According to Peru’s national elections office, Fujimori has reported more than three million dollars in income, compared to the centre-right Kuczynski’s 2.2 million. 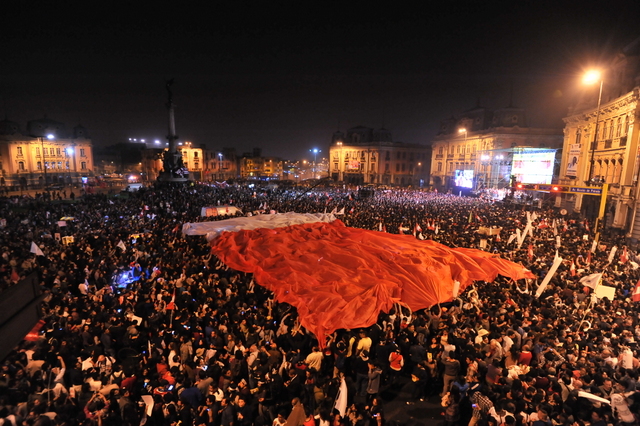 The May 31 protest in Lima against presidential candidate Keiko Fujimori, the daughter and heir to Alberto Fujimori, who is serving a 25-year sentence for crimes against humanity and corruption. Credit: Courtesy of La República

Keiko Fujimori’s main campaign funders include former officials from her father’s regime or people otherwise close to him, some of whom are implicated in the current investigation of money laundering in her 2011 campaign.

In 2013, the U.S. government accused businessman Luis Calle, who helped finance Keiko Fujimori’s campaign in 2011, of being an international drug kingpin and laundering money.

And in 2014, Peru’s special prosecutor for money laundering cases, Julia Príncipe, sought to lift the parliamentary immunity of Fujimorista lawmaker Joaquín Ramírez, alleging a major discrepancy between his reported income and his 7.1 million dollars in assets.

But the following year, Keiko Fujimori made him secretary general of Fuerza Popular and later threw all her support behind him even after the public prosecutor’s office launched an investigation of him for alleged money laundering.

And she ratified Ramírez in his post after the U.S. Spanish-language television network Univisión and the investigative journalism programme Cuarto Poder, in Lima, revealed in a joint televised news report that the U.S. Drug Enforcement Administration (DEA) was investigating him.

An undercover informant for the DEA, Jesús Vásquez, said he had recorded Ramírez saying Keiko Fujimori gave him 15 million dollars in alleged drug money to launder for the 2011 election campaign.

Although Fujimori dismissed the reports as false, Ramírez was forced to temporarily step down as the leader of Fuerza Popular, after Peruvian authorities announced a trip to the United States to interview Vásquez.

When it looked like the scandal was winding down, the TV programme “Las cosas como son” aired a recording in which Vásquez apparently said he had lied about what Ramírez said. Shortly afterwards the producer of the programme, Mayra Albán, said the recording had been doctored, and that it had come from the head of Fujimori’s campaign, José Chlimper.

It was an operation by the Fujimori camp to discredit the DEA informant, whose accusations reminded analysts and opposition politicians of Keiko Fujimori and her father: during the latter’s government, drug trafficking was one of the biggest sources of corruption, as the justice system proved.

Former anti-corruption prosecutor Julio Arbizu said “a triumph by Keiko Fujimori represents for Peruvian democracy, on a symbolic level, the exercise of shameful masochism on the part of those who already suffered the crimes and horror of her father’s government.”

“Her election would amount to support for a way of governing that violated all the principles of democracy,” added Arbizu, who headed the fight against corruption in the country from 2011 to 2014.

“But as a more in-depth consequence, a victory by Fujimorismo would mean the country would be governed by a criminal organisation (I believe Fujimorismo has always been one), which this time around has a strong coating of formality, but which has given us enough reasons to believe that it has serious ties to the drug trade and money laundering,” he added. 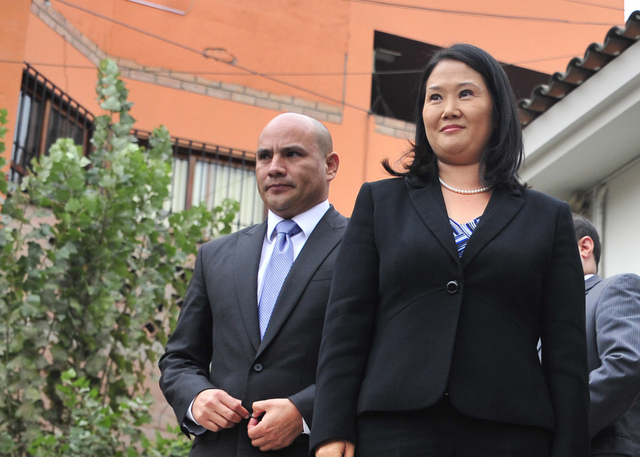 Keiko Fujimori, with Joaquín Ramírez, who has temporarily been suspended as secretary general of her party, Fuerza Popular, because of accusations of drug trade-related activities, although the candidate has confirmed her confidence in him. Credit: Courtesy of La República

Arbizu played a decisive role in the extradition of former president Fujimori, when he took refuge in Chile, in 2007, after he tried to step down as president, while in Asia, in late 2000 and was impeached by Congress for “moral incapacity.”

Congresswoman Rosa Mavila presided over an investigative commission on the links between drug trafficking and politics, which issued a report that mentioned ties with Fujimorismo.

“At the end of Fujimori’s government, when Keiko Fujimori was first lady, she asked her father to pardon the Martínez sisters, who were in prison at the time on charges of drug trafficking,” Mavila, who belongs to a centre-left alliance, told IPS.

Fujimori freed them, and when his daughter was running for Congress in 2006, “the Martínez sisters contributed to her campaign. And this isn’t the only case,” said Mavila.

“During the Fujimori administration, the drug trade had a powerful influence,” she stated.

As an example, she cited the case of drug trafficker Fernando Zevallos, who was acquitted four times during that period, but was sentenced to 20 years in prison once Toledo became president.

“Rather than trying to ward off any doubt, Keiko Fujimori has defended people accused of money laundering, as in the case of Congressman Joaquín Ramírez,” said Mavila, who pointed out that the Fujimorista leader had taken refuge in his parliamentary immunity to escape investigation.

“Immunity is not impunity. The Fujimoristas should understand that,” the legislator said.

In the May 31 march against Keiko Fujimori, the most frequently intoned chant was against the creation of a “narco state”, if the daughter of imprisoned former president Alberto Fujimori is elected Sunday.