RIGHTS-PARAGUAY: NGO Offers Girls a Way Out of Sexual Exploitation

ASUNCIÓN, Aug 17 2009 (IPS) - Claudia was 13 years old when she came to the capital of Paraguay from her small rural town. Just a few weeks after her arrival she was wandering the streets of downtown Asunción, a victim of sexual exploitation. 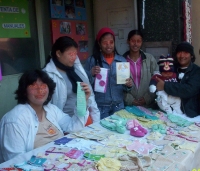 Her story replicates that of so many other girls and adolescents who every day fall into the clutches of child sex trade rings in Paraguay, one of the countries of Latin America where this heinous crime most flourishes.

Claudia* had left behind a broken and poverty-stricken family, encouraged by her older sister who was already living in Asunción. But her hopes for a better life vanished quickly and, as she found herself penniless and unprotected, she took to working the streets.

That was where she was found by Luna Nueva (New Moon), a non-governmental organisation that runs a comprehensive care programme for girls and adolescents victims of sexual exploitation, working both from its La Casa centre and through outreach activities conducted in the streets and brothels of Asunción.

"Approaching her was difficult, because Claudia had a special bond with her sister, who had been working in the sex trade for a long time," Nidia Ríos, who works with Luna Nueva, told IPS.

The NGO has a team which goes out into the streets to identify girls and adolescents in situations of social risk. "Our task is to contact them and form a bond of trust. Then we tell them what Luna Nueva has to offer them," said Erika Almeida, who heads the team.

What it offers these girls is what they call a ‘multistage journey back to life,’ which takes about three years and is divided into five stages: welcome, integration, exploration, life plans and training for life.

Claudia agreed to stay at the organisation’s shelter and began the first stage of the process, called Kunu'u (which means ‘giving affection’ in Guarani).

At this stage, Luna Nueva conducts a psychological evaluation of the sexually exploited girl, explores her relationship with her family and assesses her school situation. These are then used to make a general diagnosis, establish the priorities in terms of care, and draw up a personalised plan, which is carried out over several months.

The rescued girls are offered the possibility of living at the centre – even bringing their children with them, in the case of young mothers – or of continuing in the programme as external participants. The only requirement is that they get out of the sex trade. In exchange, they receive psychological counselling, are incorporated into some form of work and participate in activities that encourage them to express themselves.

When Luna Nueva finds them, many don’t even know how to read and write, and by gaining access to education, new opportunities open up for them and they establish a new relationship with their environment.

Claudia went back to school and slowly began rebuilding her relationship with her parents and siblings, which she had shied away from as she had been badly abused at home.

"The greatest obstacle is that these kids come from broken families, who don’t contribute to this process. The girls feel lonely, they need to receive affection, but they have no one," Ríos said.

There’s always the chance that they will leave the programme, and many times the girls’ own families – mired in poverty and a loss of values – are the ones that persuade them to drop out.

"Often, families are so concerned with their needs that they come to see prostitution as something natural, as a source of income, so the girls are forced to abandon the programme," Ríos explained.

Almeida explained that the girls who work in the market selling goods are often only able to sell their merchandise if they agree to have sex with the buyer. Many underage girls are also hired as domestics in what is actually a "front" for their subsequent sexual exploitation, according to a study conducted by the organisation in March.

The Luna Nueva counsellors inform the victims about the programme and how they can get in, and also carry out awareness-raising and prevention campaigns on the subject of sexual and reproductive health.

"If they don’t want to come with us, we try to establish and maintain a connection with them, supporting them from outside the programme with concrete activities," Almeida said.

Luna Nueva has been taking in girls aged 11 through 17 since 1995, when city authorities tried to get sex workers off the streets. In Paraguay, prostitution is legal for adults 18 and older.

"A group of organised women who supported these workers were able to identify that a large number of them were girls and adolescents," Raquel Fernández, the director of Luna Nueva, told IPS.

There are no official figures on the number of underage female victims of the sex trade in Paraguay, but a 2005 special report by the United Nations Children’s Fund (UNICEF) revealed that the phenomenon had reached alarming proportions in this country.

In Paraguay, two out of three sex workers are underage girls, child trafficking, prostitution and pornography are "tangible and widespread," and victims are generally initiated into the trade between the ages of 12 and 13. The vast majority of the girls who are exploited in Asunción come from outside the capital and have severed all ties with their families after suffering sexual or physical abuse at home.

According to UNICEF, 98 percent of all sexually exploited girls receive six to 10 dollars for each sex act they perform. During a visit to Paraguay in 2004, then U.N. Special Rapporteur on the Sale of Children, Child Prostitution and Child Pornography, Juan Miguel Petit, said he was moved by the many accounts he heard from very young girls who prostituted themselves for a dollar or a meal.

And the child sex trade is not limited to Asunción. It happens throughout the country, reaching especially dramatic levels in Ciudad del Este, the capital of the province of Alto Paraná, in the southeast. This city – part of the Triple Frontier, where Paraguay meets both Brazil and Argentina – is plagued with illegal activities of all kinds.

A May 2002 assessment by the International Labour Organisation’s International Programme on the Elimination of Child Labour found some 650 sex workers in the streets of Ciudad del Este, 250 of whom were underage victims of prostitution and other forms of organised crime closely linked to the sex trade. The magnitude of the problem led the ILO to establish a special centre there to provide care for the victims.

In Paraguay the commercial sexual exploitation of underage boys and girls is fuelled by four factors that in turn feed on each other: poverty, inequality, social exclusion and a dominant patriarchal culture, according to the Latin American Centre for Experts on Child and Adolescent Exploitation, created in 2006 following the first regional forum held on this crime.

Paraguay is one of the poorest countries in South America, with 20 percent of its 6.1 million people living in extreme poverty – on less than a dollar a day – and another 36 percent below the poverty line.

Celeste Oudin, planning director at SNNA, told IPS that the purpose of the plan is to help focus the attention of the country’s institutions on this problem and to promote the adoption of measures aimed at protecting the rights of the victims.

But for now the SNNA lacks a direct intervention programme to address a crime that is scarcely viewed as reprehensible by society. It does however coordinate its actions with organisations such as Luna Nueva and the justice system.

The director admitted that it’s hard to deal with a problem that cannot be solved merely by pulling the exploited girls off the streets, and much less by arresting them, while "clients and pimps, for example, are not arrested."

For Oudin, exploitation exists because there is demand for sex with minors, so the solution lies in going after the exploiters – the clients and pimps – which would require interdisciplinary actions on multiple fronts.

But Luna Nueva director Fernández is optimistic about the possibility of establishing an efficient public policy to attack this scourge, based on political will and the combined efforts of public and private institutions.

Claudia’s case is also a sign of hope. Seven years after coming to Asunción and after spending four in the programme, where she came to realise that a different life was possible, she is now studying to become a nurse, is integrated into society and lives with an aunt near the capital.

The Luna Nueva counsellors said she gave it her all, fighting off pressure from her sister – the person she loved most in the world -, who never stopped insisting that she return to the streets. It was very hard for her to rebuild her self-esteem and her relationship with her family, but today she keeps in touch with her parents and even visits them occasionally. "She’s a real success story and an example," one of the NGO's workers said.

* Her last name is omitted to preserve anonymity.