BUENOS AIRES, Oct 6 2009 (IPS) - “The entire social fabric of an area is compromised when soils are depleted,” says Italian expert Massimo Candelori, whose fight against desertification is increasingly linked to global efforts to combat climate change. 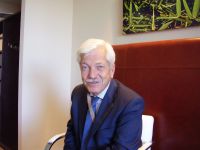 As head of the facilitation, coordination and monitoring of implementation unit of the United Nations Convention to Combat Desertification (UNCCD), Candelori is in charge of ensuring that countries comply with soil preservation efforts, practically without funding.

The Latin American region has not escaped the threat of desertification. According to a 2005 study by the Economic Commission for Latin America and the Caribbean (ECLAC), 25 percent of the regional territory is arid, semiarid, or sub-humid, and of that total 75 percent suffers erosion.

Tierramérica spoke with Candelori during his two-week visit to Buenos Aires, where he took part in the 9th Session of the Conference of Parties (COP 9) to the UNCCD, Sep. 21-Oct. 2, with more than 2,500 participants from 193 countries.

He said the desertification meet also sought ways to connect with the 15th Conference of Parties to the U.N. Framework Convention on Climate Change, to take place in December in Copenhagen.

TIERRAMÉRICA: What is the difference between a desert and desertified land? MASSIMO CANDELORI: Desertified lands are subject to natural phenomena and human activities that degrade them. They were not deserts before but they are becoming deserts, and that is what we are trying to combat with the Convention. Deserts are beautiful, fascinating and mysterious, but they are outside our purview.

TIERRAMÉRICA: What is the desertification situation in Latin America? MC: We don’t have current data. One of the issues of COP 9 was precisely to have indicators that allow us to better understand the situation. Countries should be able to measure the gravity of the problem. The most recent figures are from 10 years ago.

One might think that the continent most affected is Africa, but in Latin America there are desertified areas, even in countries like Brazil. There are also serious problems in Argentina, Mexico, Peru, Cuba and many Central American and Caribbean nations. A good part of Mexican migration to the United States is the result of a lack of fertile soil.

TIERRAMÉRICA: What are the principal causes of soil degradation? MC: In the first place, there are natural phenomena linked to climate variation, such as drought. And then there is the human component: unsustainable management of land, frequency of planting without ensuring natural rotation of crops, and the use of soils that aren’t suitable for certain crops.

TIERRAMÉRICA: And the consequences are just environmental? MC: No. Erosion means less abundant harvests. It also means displacement of human populations. The entire social fabric of an area is compromised when soils are depleted.

TIERRAMÉRICA: Can desertification be reversed? MC: It costs a great deal. The priority should be to protect the soils. Because when land is desertified it costs 10 times more to recover it.

TIERRAMÉRICA: Could you mention a concrete case in which rehabilitation of degraded soil has been successful? MC: In Argentina there is a case in the (northern) province of Santiago del Estero: Colonia El Simbolar.

Thanks to donor countries we identified sites on the three continents most affected by the phenomenon (Africa, Asia and South America) where we could develop projects that coordinated among the conventions on desertification, biodiversity and climate change. One of those is in Santiago del Estero, where we worked in a highly deteriorated area of more than 3,000 hectares, using autochthonous species.

The growth of those plants is slow, they produce less than other species, but we are recuperating the biodiversity and the soils in an area that small farmers had abandoned because of salinisation.

The experience is so important that we are talking with the provincial government to use it as a prototype in other regions. The small farmers joined the project, but so for it is not producing. Of course, there is also the problem of how long they can wait without income from land that they are working to improve.

TIERRAMÉRICA: How is desertification related to climate change? MC: This is one example. The third component of the Santiago del Estero project is carbon credits. The project’s capacity to capture carbon is being certified through the CDM (Clean Development Mechanism of the Kyoto Protocol on climate change).

Desertification and climate change go together. If we leave soil without plant cover, it heats up more rapidly, which aggravates climate change. And if the temperature increases and precipitation declines, the ground cover will be lost and all of the carbon sequestered in the soil will be emitted into the atmosphere because of the heat.

TIERRAMÉRICA: What role should land play in the Copenhagen negotiations, in the attempt to reach an obligatory accord to succeed the Kyoto Protocol? MC: It isn’t easy to quantify the carbon sequestered in the soil, because it varies a great deal from Alaska to the tropical zones. We need data. Perhaps we aren’t at a point where we can put soil into the negotiations, but we have to start. We hope that in Copenhagen there will be a decision at least to use soil in the carbon market.

TIERRAMÉRICA: Do developing countries have the resources to tackle desertification? MC: A few countries can pay the costs of desertification – industrialised countries like Italy, Spain and the United States. But they aren’t budgeting enough to fight the phenomenon.

Others, in Africa or Latin America, need international cooperation. Still up for discussion is what will be the financial mechanism of the UNCCD, which today doesn’t have one.