NAHR AL-BARED, Lebanon, Nov 25 2009 (IPS) - More than two years after their refugee camp was destroyed in a war between the Lebanese army and the Islamist militant group Fatah al-Islam, Nahr al-Bared refugees Wednesday witnessed the start of the camp’s reconstruction. Their relief is mixed with scepticism, however. 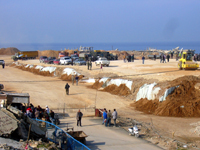 Established in 1949, the Palestinian refugee camp of Nahr al-Bared in north Lebanon’s Akkar region has become home to more than 30,000 residents. In the summer of 2007, the camp was totally destroyed as the Lebanese Armed Forces (LAF) fought a group of well-equipped, mostly non-Palestinian militants who had taken over the camp.

During the 15-weeks of war, a local grassroots commission was quickly formed. By early 2008 it had worked out a master plan for the camp’s reconstruction, which was approved by the Lebanese government and the United Nations Works and Relief Agency for Palestine Refugees (UNRWA).

Rubble removal and the actual rebuilding works were delayed several times, however. In spring 2009, the foundation stone for the reconstruction of Nahr al-Bared was laid and ceremonial speeches were given, but the bulldozed area remained untouched. Again in the summer of 2009 work was to start, but the leader of the Free Patriotic Movement and former general Michel Aoun blocked the government decision to rebuild Nahr al-Bared and a two-month moratorium issued by Lebanon’s state council stopped all work on the ground.

In the early morning hours of Nov. 25, officials of the UNRWA, representatives of various Palestinian parties and community organisations – including displaced residents of Nahr al-Bared – guarded by Lebanese soldiers, witnessed and applauded as concrete for the basements of the first houses was poured from a truck.

Mahmoud Eshtawi, a father of two, has been living in a 18 square meter iron barracks adjacent to Nahr al-Bared for the last one and a half years. Currently, his only job is to drive the local kindergarten bus twice a day. He feels relieved: “We’ve been living in very difficult conditions in our barracks. What I’ve seen today makes me feel better and gives me hope that they’ll rebuild the camp.” His sister Manal nods: “I’m happy. Although not knowing how long it will take, I have hope to return home. Our return is most important.”

The various delays over the last two years have caused widespread pessimism among Nahr al-Bared’s refugees. “From the beginning until today, we’ve faced a lot of obstacles and delays.

Within the last two and a half years we could have rebuilt the camp,” says Abu Khaled Freji. He’s been working with the Nahr al-Bared Reconstruction Commission (NBRC) since its establishment during the war. He explains that people who have been living in garages and barracks often felt betrayed and lied to, adding: “This is just the beginning, nothing more. Always we’ve swung between hope and frustration. Living in a very difficult and tiring situation, I’m cautious to feel extremely happy just because they poured some concrete today.”

Access to Nahr al-Bared’s outskirts as well as to the construction site is still controlled by the LAF.

Amr Saededine, a journalist closely following developments in Nahr al-Bared points to the LAF as a big obstacle to the reconstruction process. “The army interferes in anything. Nahr al-Bared was declared a military zone. But this here is a civilian area, not an army base!”

Saededine says the LAF have over and over demanded changes in the master plan for the reconstruction. “In the beginning, the army didn’t want the houses to have balconies, for example. They also demanded the streets to be wide enough so tanks could enter.”

The funding for Nahr al-Bared’s reconstruction is yet another open question. As for now, UNRWA has only been able to raise about a third of the 328 million dollars required. Last week, representatives of about a dozen donor organisations visited Nahr al-Bared. UNRWA officials have recently expressed their optimism that the beginning of the reconstruction and the forming of the new Lebanese government will attract more funding.

As a result of the LAF’s siege of the camp and the destruction of its businesses, unemployment has drastically spread in Nahr al-Bared.

Wednesday, many young males gained hope. Mohammad Eshtawi has spent the last two years mostly drinking coffee and sitting around, only rarely having a chance to work and earn some money. His mood has changed to cautious optimism. “We’ve been waiting for the start of the reconstruction for a long time. I hope that many of us will find work in the reconstruction,” Eshtawi said. “It is a long undertaking. I hope me and my father will be employed there, too.”

*Ray Smith works with the autonomous media collective ‘a-films’ which has documented developments in Nahr al-Bared over the last two and a half years.