GENEVA, Apr 24 2010 (IPS) - Raed Abu Hammad, 27, was allegedly kicked to death by Israeli prison wardens on Apr. 16. This while Palestinian prisoners in Israeli jails have been on hunger strike since Apr. 7 to press for better treatment. 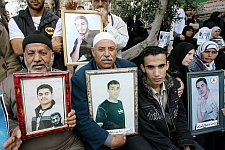 Families of Palestinians prisoners hold up their pictures at a protest in Gaza city. Credit: Mohammed Omer/IPS

Palestinian minister for prisoner affairs in the United States-backed government in the West Bank, Issa Qaraqi, said at a press conference on Thursday that an Israeli autopsy showed that Hammad had been kicked hard in the lower back.

Qaraqi based his statement on a report he had received from a Palestinian doctor who was present at the autopsy.

However, spokesman for the Israel Prisons Service, Yaron Zamir, maintains that results from the autopsy were still awaited. ‘’The claims made in relation to the prisoner dying after having been beaten are unfounded, untrue and misleading,’’ Zamir said in a statement.

Qaraqi, who spoke with IPS over telephone, said that his ministry would be making a formal complaint in the Israeli courts asking for an immediate, in-depth investigation into the cause of Hammad’s death.

Apr. 17, the day after Abu Hammad was fatally kicked, is observed in the Palestinian Occupied Territories as ‘The Day of Palestinian Prisoners’.

The estimated total number of Palestinian prisoners in Israeli jails, detention centres is 7,500. Among these are, 330 children under the age of 18 years, 37 female prisoners and 15 members of the democratically elected legislative council and ministries.

The prisoners are distributed in more than 18 prisons and detention centres across Israel and the West Bank, the biggest are the Negev Desert Prison and Ofer Prison, or what was formerly Incarceration Facility 385, close to the Palestinian city of Ramallah.

Israel also imposes a punishment of 100 US dollars to be collected for each prisoner on hunger strike or does not comply with prison regulations, according to minister Qaraqi.

It is to protest against these conditions that Palestinian prisoners have been on hunger strike since Apr. 7 in what they call the ‘Empty Intestines Battle. Exactly how many prisoners are participating in the hunger strike is unknown.

Demands include medical care for the “most seriously diseased prisoners”, an end to mistreatment of families during visits that includes forcing them to take off their clothes for strip searches.

A statement by the National Senior Committee for Supporting Detainees (NSCSD), that has been functional since the beginning of this year, mentions the increasing number of administrative detainees in Israeli jails.

According to Riad Al Ashqar, press officer with the NSCSD, the number of administrative detainees now stands at 290 prisoners, an issue which he considers a “humanitarian crime” since they are mostly being held without charges.

He mentioned a number of documented cases, including that of former minister of prisoners Wasfi Qabha from the former Palestinian National Government, whose prison sentence was extended six times. Qabha was, however, released this week and a huge reception was accorded him by his family and friends at the Al Dahireah checkpoint close to Hebron.

“Administrative detention is a model of psychological torture, where prisoners never know when he/she will be released, but instead are subjected to extended detention anytime,” Al Ashqar said.

Al Ashqar also spoke of reports which lack information on the actual charges against these prisoners, but document violations of prisoners’ rights.

As of Palestinian Prisoners Day some 20 percent of Palestinian prisoners were in need of medical treatment or psychological support. The reports said 16 prisoners have cancer, 88 are diabetics needing stabilisation, 25 have kidney failure and 23 have disabilities.

Hammad was physically fit although he had been ‘’kept in solitary confinement for more than a year for breaking a TV monitor in the prison accidentally,’’ his mother said.