MEXICO: Children in the Line of Fire in Ciudad Juarez

CIUDAD JUÁREZ, Mexico, May 10 2010 (IPS) - In Ciudad Juárez, the most violent city in Latin America, Mexico’s war on drugs has left at least 110 children dead in the past three years, and over 10,000 have lost parents. 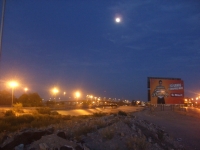 Civil society organisations are urging the authorities elected in an upcoming ballot to meet the needs of this vulnerable population.

An air of despair hangs over this border city. Deserted streets and empty houses — about 100,000 of them — testify to the defeat of a society that has gone through horror, indignation, rage and exhaustion in the past two decades.

When night falls there is a kind of voluntary curfew, in contrast to the lively night life that used to animate the city centre. Few people walk the streets, even in daylight, and most people think twice before answering phone calls from numbers they do not recognise. One-third of the shops are closed in this northern Mexican city across the border from El Paso, Texas.

Verito is seven years old. In December, her school teachers were forced to hand over their extra month’s salary, paid before Christmas, in “protection money” to an organised crime group so that the pupils would not be harmed.

“They say they threatened the head teacher with putting bombs in the school, and that’s why they cancelled classes,” she says.

She knows that there are people in her city who kidnap and kill children. And that “all” adults “pay their dues” to drug mafias: “They have to pay money,” she explains, before talking about her dream of a city “that is the same, but without violence, without the news.” Her account is part of “Un, dos, tres, por mí y por todos mis amigos” (One, two three, for me and all my friends), a project that includes a book and a DVD recording voices, drawings and photographs of Ciudad Juárez four-to-eight-year-olds, compiled between 2008 and 2010 by civil society organisations belonging to the “Infancia en Movimiento” (Childhood in Movement) initiative.

The strategy against drug trafficking adopted by the Mexican government has in the last three years led to the deaths of at least 110 children who were caught in the crossfire between federal police, the armed forces and drug cartels in this city in the state of Chihuahua.

Non-governmental organisations estimate that about 10,000 children have lost at least one parent in the war on drugs, on the basis that each of the 5,000 murder victims of reproductive age probably had two children, in line with demographic statistics. But there are no official figures.

“It’s tragic that there isn’t even an official estimate of the number of children who have lost a parent to the violence,” Lourdes Almada, the technical secretary of the Children’s Board of the Citizens’ Council for Social Development, told IPS.

“Children who have suffered violence in their families or close circles are not receiving assistance from anyone,” she added.

Since 1993, when the ongoing wave of murders of factory women began in Ciudad Juárez, the city has earned a world reputation for gender violence, which has claimed over 1,000 women’s lives so far, and for the entrenchment of criminal organisations.

“Ciudad Juárez is different from other places in the country because the drug traffickers here have overstepped all the boundaries. It’s very difficult to react to the violence against children,” Juárez filmmaker Ángel Estrada, who directed the documentary film “Escenarios de guerra” (Scenes of War), told IPS.

The film, which premièred here Apr. 28, is about the impossibility of doing theatre in such a violent city.

In 2005, Ciudad Juárez was in an uproar over the deaths of two girls: seven-year-old Airis Estrella Enríquez, whose body was found in a barrel filled with cement, and 10-year-old Anahí Orozco, whom a neighbour raped and killed before setting fire to her body, while her mother was working in a “maquiladora”, a factory that assembles goods for export.

That same year, six other children were murdered, but still no funds were made available for protecting children.

Now local newspapers are reporting news like the murder of a family while they were at a wake for a teenager killed in Parral, a city in southern Chihuahua.

The murders of 16 young people at a party in the neighbourhood of Villas de Salvárcar in February brought a flurry of federal officials to the city where they spent many hours in meetings, but with no results.

“Underneath all this there are decades of neglect and of a lack of efforts towards human and social development,” said Almada. “The explosion of violence in Juárez is the result of an economic model that does not take people into account.”

Another form of violence in Ciudad Juárez is reflected by the fact that in the course of 2008 and 2009, 300,000 direct, indirect and temporary jobs were lost, among a population of just over 1.2 million.

Lay-offs have been heavy at the maquiladoras, a mainstay in Ciudad Juárez, which employ mostly women. These factories, which enjoy tax breaks and other benefits, have shed 120,000 jobs, for each of which an estimated 1.5 jobs are lost in the informal economy.

“What is happening in Ciudad Juárez is an expression of social exclusion,” Nashieli Ramírez, head of Ririki Intervención Social, a social organisation, and coordinator of Infancia en Movimiento, told IPS. “It is going to happen all over the world, not just in Mexico, with this rush to urbanisation that cannot be understood except from the marginalisation and social exclusion that we will all experience.”

And so we go on, “without any options for young people, with children who can’t play in the streets, isolated families and single mothers,” she added.

It is an enormous challenge. Ciudad Juárez has one of the highest proportions of children in this country of over 107 million people, and yet it has the lowest indicators of care and protection.

The city holds the national record for women’s participation in the workforce, and one-quarter of working mothers leave their children alone for three or four hours a day.

Children in Ciudad Juárez candidly say they have seen three, four or five people killed on the streets. Seven-year-old Alicia says she feels unsafe in public places, and eight-year-old Irving Leonardo draws a picture of himself “in a drug traffickers’ hotel with gold taps.”

Faced with this situation, organisations devoted to children’s welfare are launching a campaign, Hazlo Por Juárez (Do It for Juárez), financed by the Bernard van Leer Foundation, aimed at influencing the political platforms of candidates running for the Juárez mayor’s office and the Chihuahua state government in the upcoming Jul. 4 elections.

“We are going to launch a social movement in Juárez, and we want it to have an impact across the country,” Ramírez said.

“We cannot lose another generation. We have to open the door to a different future,” said Almada.